Niloufer Mavalvala has been documenting the richness and diversity of Parsi food since 2013. A new book, The Vegetarian Parsi: Inspired by Tradition, is her endeavour to showcase the portmanteau of variety that Parsi cuisine is. Patra ni Machi, dhansak, mutton cutlets — think Parsi food, and these are the dishes that come to mind. Few seem to have heard of vegetarian Parsi fare; even fewer have celebrated it.

Niloufer Mavalvala — author, photographer and culinary instructor — has been documenting the richness and diversity of Parsi food since 2013, a journey she embarked on at the age of 50. A new book, The Vegetarian Parsi: Inspired by Tradition, is her latest endeavour to showcase the portmanteau of variety that Parsi cuisine is.

“The truth is that we all need to eat more vegetables for the sake of the environment,” Mavalvala  says, of why she chose to focus on vegetarian aspects of Parsi cuisine. “The next generation is ready to do so. And this book is meant to be treated as a [guide to] regional Indian cuisine for people who do not live in Parsi homes.”

Mavalvala’s mission is to revive her community’s cuisine and put it on the global gastronomy map. In keeping with that aim, her new book continues the meticulous chronicling of Parsi food that she initiated in her earlier works (The Art of Parsi Cooking: Reviving an Ancient Cuisine and The World of Parsi Cooking: Food Across Borders).

For the Karachi-born grandmother who is now settled in Canada, sharing the versatility of Parsi kitchens with the world is serious business.

That “Parsis don’t eat vegetables” is a myth, says Mavalvala, emphasising: “Though it is widely assumed that Parsis never eat vegetables, our cuisine celebrates vegetarian dishes.”

Among the distinctive features of Parsi cuisine are the reduced use of oil, well-balanced flavours of thikku-khattu-mitthu, and the art of cooking vegetables without reducing them to a pulp.

Vegetarian food is traditionally prepared on certain days of each month, when Parsis abstain from eating meat, as also for the entire month of Bahman (around mid-June), which is dedicated to respecting the animal kingdom. All-vegetarian fare is prepared for the first three days after a loved one dies. People also abstain from meat on the second of the four-day Parsi wedding feast. “Not all Parsi families follow these rules, but it is in our scriptures. But growing up, we all had a vegetable dish at the table to start the meal with. We often had it as a main course with a side of fried fish. This was year-round,” Mavalvala recounts. The better known Parsi vegetarian dishes are (of course) the ones centred on papayta or potatoes, served in every possible way — diced or sliced, with spices and other vegetables, with eggs. Another common vegetable is eggplant, which is pan-fried in masala with yoghurt. The vengna no patiyo, (eggplant in an onion and tomato chutney) is prepared in exactly the same way as the jhinga no patiyo (made from prawns), just with the shrimp substituted with the eggplant. Paaprie (made from green hyacinth bean) is another popular vegetable preparation, with layers of yam, potato, onion, tomato, baby eggplant and garlic.

The paaprie is Mavalvala’s favourite dish, both to eat and to cook. She recalls her mother making it with much love, and calls it one of the simplest ‘one-pot recipes’ that is visually appealing and scrumptious at the same time. “French beans and khatti mitthi guar are also favourites,” she shares. “Cooking sweet ripe mangoes, keri kanda, is another example. Lagun nu stew is the dish that is served at every wedding feast. The Parsi stew is diced and pan fried. It has dried fruit like apricots added for its sticky sweetness that brings it all together. Dahi and topli na paneer, lots of varieties of lentils, all make it to the vegetarian menu.” 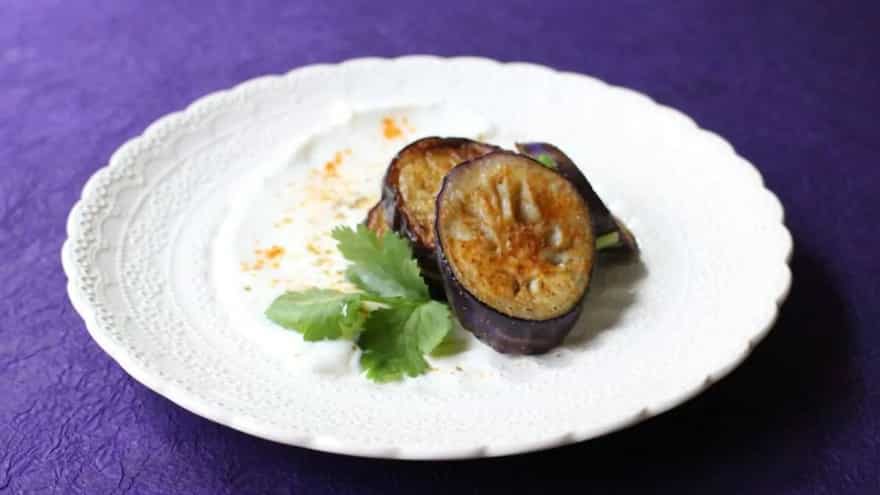 Other chapters deal with popular rice dishes (including the eye-catching dodhi chawal), palaus and other lentil based dishes. And can dessert be far behind? From lagun nu custard (served at weddings) to copra nu cake (coconut cake), it is a sweet delight for connoisseurs.

Mavalvala, who combed through the family archives for recipes, says the traditional methods involved are what made each of these dishes iconic. She shares an example: “The perfect curry chawal used to be made by toasting each ingredient on a cast iron tawa, [including] spices and the raw onion, before the masala was prepared on a masala no pathar-stone. Vinegar was drizzled in to grind it down to a smooth pulp. This was then slowly cooked on a low fire until all the oils were released and rose to the edges of the pan. This is called tayl per avanu.”

Topli na paneer has been rediscovered and shared with the world for the first time through her work. Mava na cake, an assortment of dishes served at breakfast with toast (including vasanu, a Gujarati word used for a combination of seeds and grains mixed, cooked and uncooked) and badam paks reappear in the book.

“Anyone who has a Parsi friend waits to attend a wedding or a navjote where they can taste their favourite Parsi meal. A feast, no doubt. These are special occasions with specially prepared festive meals. If they are more personal friends, they may be invited to a house party or particularly requested dhansak luncheon. Where would the typical person eat the simple food we offer?” Mavalvala asks. Hence this cookbook, especially as the last handful of Irani cafes in India only sell favourites like kheema pao and sali boti, cakes and biscuits, choi and berry palau.

The Vegetarian Parsi has a certain je ne sais quois. Culture and heritage speak volumes through food. And cookbooks add to our history. With its focus on Parsi food, this is a charming rendering of an uncelebrated facet of a celebrated cuisine.

4 Vegetarian Starters For A Dinner Party At Home

Mango in your pizza? This food festival asks why not

Just one glass of milk isn't enough! These 7 foods are powerhouses of calcium