Vegetarian? Try this kathal curry that will startle your taste buds! Trying to transition to a vegetarian diet and planning to stop eating meat? We offer the ideal formula that will ensure you never miss your favourite chicken curry. The vegetarian curry is made with jackfruit, or kathal, a fruit. Finding a replacement for the texture and flavour of meat might be difficult for most meat eaters who decide to go vegetarian. The vegetarian food item that comes closest to chicken in terms of flavour and texture is khattal. To increase the protein level of the meal, we also added shredded soya chunks and cashew-almond paste. This recipe will show you how to cook chicken curry-tasting Kathal Curry at home.

Actually, jackfruit, also known as kathal, is a common summer fruit that is frequently used to make curries. Raw Kathals are used to make curries, whereas ripe Kathals are eaten as fruits. Jackfruit is a calcium-rich food that will strengthen your bones. Additionally, it contains soluble and insoluble fibre, which supports gut health and aids in digestion. Kathal is the best food for people with high blood sugar levels because it also has a low glycemic index. Kathal, which is high in vitamin C, not only improves immunity but also makes skin glow from the inside out. Carotenoids, an antioxidant found in jackfruit, are thought to protect against conditions including cancer, heart disease, and even cataracts.

7. ½ tsp garam masala and salt as per taste.

- Cut the uncooked inner fruit of the Kathal into medium-sized pieces, wash carefully, and then throw away the hard outer shell.

- Put the Kathal pieces in a bowl after draining the extra water.

- Mix thoroughly with your hands, then evenly spread the mixture over each piece.

- For 30 minutes, let the Kathal marinade in the covered basin.

- Heat two tablespoons of oil in a non-stick kadhai or pan.

- Add the chunks of Kathal that we marinated to the pan once it is hot.

- The Kathal pieces should be shallow-fried on both sides.

- It will take about 6 to 8 minutes to complete the operation.

- Turn off the heat at this point and reserve the shallow-fried Kathal pieces for another time.

- Add 1 teaspoon of salt and the soya chunks to the saucepan.

- Now drain the water and squeeze the chunks to remove all the extra moisture.

- Blend the chunks after adding them to the blender to shred them and create keema. 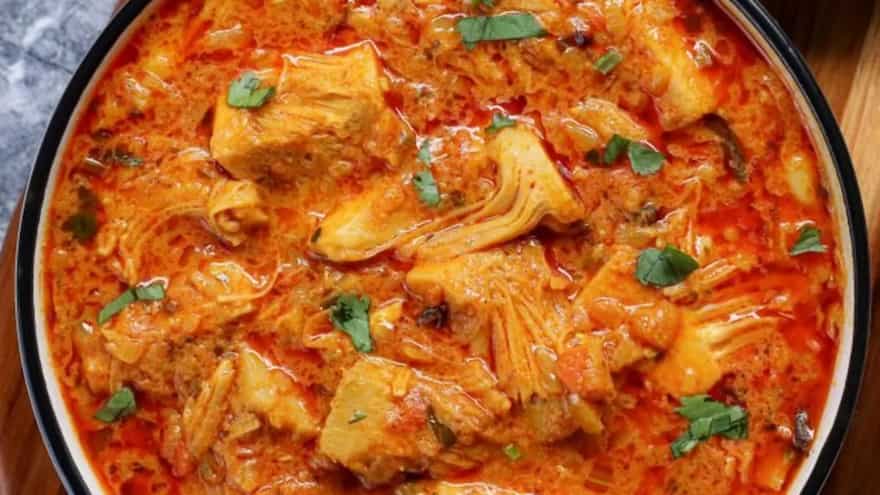 16. 2 tbsp coriander leaves and salt as per taste

- First, let cashews and almonds soak for 15 to 20 minutes in boiling water. After draining the water, peel the almonds.

- Almonds and cashews can be added to a blender. To get a thick paste, add roughly 3–4 tbsp of water and combine.

- Heat two tablespoons of oil in a non-stick kadhai or pan.

- Add to it a bay leaf, a cinnamon stick, some green cardamoms, some cloves, and some cumin seeds. For one minute, sauté.

- Add the pasted ginger and garlic and chopped onion. They should be sautéed until the onions are golden.

- For the next 1-2 minutes, add the turmeric, red chilli powder, and coriander powder.

- Add salt to taste along with the finely diced tomatoes. Give it a good stir after adding around 1/4 cup of water. Put a lid on the pot and simmer the tomatoes until they are soft.

- When the tomatoes have released their oil from the sides of the pan, add the shredded soya chunks, cashew-almond paste, and pieces of Kathal that have been shallow-fried and combined well.

- Your puckering The Kathal Curry is now prepared for serving. Enjoy it with some rice or chapati. Due to its texture, Kathal Curry tastes extremely similar to Chicken Curry and is suitable for all vegetarians.

Love Jackfruit? Then You Must Try This Kathal Ka Achaar

3 Delightful Recipes You Can Make With Leftover Kathal Sabzi