Vegetarian Dishes That Have The Best Desi Chinese Flavours

Try these vegetarian Desi Chinese dishes that will add a smokey flavour to your palate. Indian Chinese cuisine, also known as Indo-Chinese cuisine, Sino-Indian cuisine, Chindian cuisine, Hakka Chinese, Desi-Chinese cuisine, or Desi-Chindi cuisine, is a fusion cuisine that combines Indian and Chinese cuisines and flavours. Though the cuisines have mixed throughout history via the Silk Road via Tibet, the most common genesis narrative of fusion food is attributed to the Chinese of Calcutta, who emigrated to colonial India some 250 years ago in search of better prospects and lives. These early Chinese immigrants altered their culinary skills to suit the tastes of their Indian customers when they opened restaurants in the area. Chinese Indian cuisine is distinguished by its ingredients, which include Indian vegetables and spices, as well as a strong use of pungent Chinese sauces, thickening agents, and oil. Indo-Chinese cuisine is stir-fried in a wok and incorporates spices and flavours that are familiar to the Indian palette. This concept of flavorful, saucy Chinese food cooked with Indian spices and vegetables has become ingrained in the mainstream culinary scenes of India and Bangladesh. The spread of this cuisine to countries such as the United States, the United Kingdom, and Canada have shaped and altered global perceptions of Chinese, Indian, and Asian cuisines. Spices like cumin, coriander seeds, and turmeric are commonly used to flavour foods, despite the fact that they are not traditionally connected with Chinese cuisine except in a few regions, such as Xinjiang. In addition to hot chilli, ginger, garlic, sesame seeds, dried red chilis, black peppercorns, and yoghurt, many cuisines call for them. As a result, many ethnic foods in Southeast Asian nations with strong Chinese and Indian cultural influences, such as Singapore and Malaysia, taste similar to Indian Chinese food. Non-staple items come with a hearty portion of gravy by default, although they can optionally be ordered "dry" or "without gravy." "Chili," "Manchurian," and "Schezwan" are common culinary types in Indian Chinese cuisine. 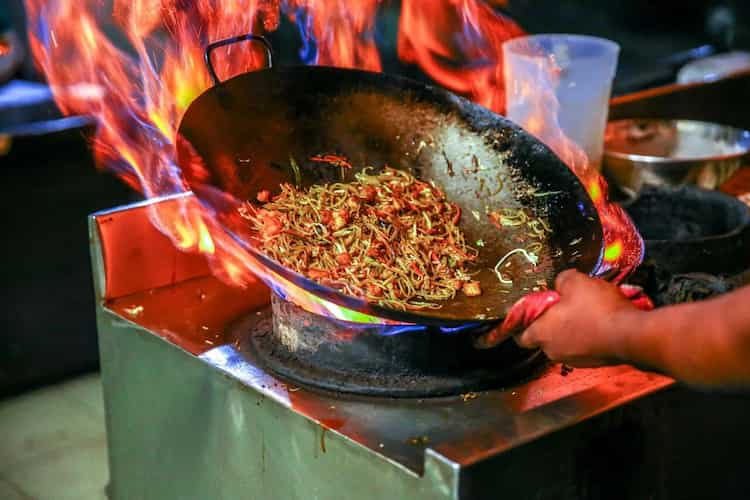 This dish is prepared with soya bean nuggets and is a popular and nutrient-dense Indo-Chinese starter. In comparison to other indo Chinese street food dishes. It is simple and straightforward to prepare and can be made in minutes. Soybean chilli is most commonly served dry, however, it can also be served with sauce.

Chilli paneer is every vegetarian's favourite. Paneer stir-fried in Chinese sauces and veggies is a perfect evening snack for those who like Chinese cuisine with a hint of Indian touch.

Gobi Manchurian is a traditional Chinese dish made of batter-coated, fried, crispy cauliflower florets tossed in a spicy, sweet, hot, and umami manchurian sauce. The addition of tomato ketchup adds sweet undertones to the manchurian sauce, distinguishing it from the chilli sauce we use for Chilli Gobi or Chilli Paneer.

Chilli mushroom is an indo Chinese appetizer. There are two easy variants to make: one is a recipe for lightly fried mushrooms that are fantastic for dipping, and the other is a healthy sauce variation that goes well with rice. Both are incredibly simple to prepare and delightful to eat as an appetizer, side dish, or snack.

Honey chilli potato is every Indian's comfort food. This desi Chinese delicacy adds a spicy and sweet flavour to the taste buds. No desi Chinese platter is complete without chilli potatoes. It is a dish that is widely served all over the country and enjoyed by all.

Vegetable chop suey consists of all the exotic veggies, stir-fried and cooked in clear soup and served with fried noodles. This desi Chinese dish is a saviour during winters.

This dish is a perfect option for all the vegans out there. Stir-fried tofu is a desi Chinese snack that is made with stir-frying tofu with veggies and spices on high flame.

Evening snack: Give your Maggi a desi Chinese twist with this easy recipe