This dish is a unique preparation of thick, tasty gravy and deep-fried noodles Veg Chop Suey, better known as Veg American Chop Suey, is globally recognised and adapted to local palates, as it has in India, where it is widely savoured, from fine dining restaurants to small diners. Indian American Veg Chop Suey combines soft and crispy textures in its preparation of a thick gravy of sauces and crunchy vegetables, served on a bed of deep-fried, crispy noodles. The gravy is made with cabbage, carrots, capsicum, and onions, seasoned with ginger, garlic, salt, and black pepper powder, in a delicious mix of soya sauce, vinegar, and tomato ketchup, thickened by corn flour.

Veg Chop Suey is quite filling and makes a meal by itself. The dish was originally made out of leftovers, and primarily comprises cabbage, carrots, capsicum, and celery, in various sauces thickened with starch/corn flour. The non-vegetarian version includes meat, such as chicken, pork or beef, with an array of crunchy vegetables, served on deep-fried, crispy noodles, topped with a fried egg.

There are many chop suey origin theories. Some say it was invented by Chinese Americans in the US. Anthropologist E.N. Anderson says it originated from a dish called Tap Suei, which loosely translates to varied leftovers, which is from China’s Guangdong Province, in a place called Taishan. It has also been claimed that the dish was first prepared by a Chinese cook in the US. Be that as it may, the indisputable fact is that Chop Suey is a favourite among Chinese innovative dishes. 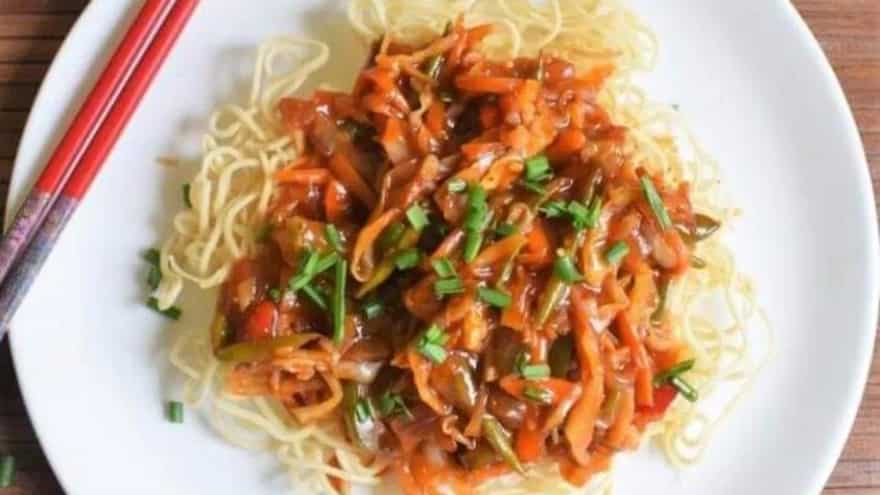 Here is a recipe for Veg Chop Suey:

Veg Chop Suey is usually enough for a filling meal, but you can eat it with a side dish or soup.

What Shaped The Great American Cuisine?