In a recent 'Ask-Me-Anything' session on Instagram, Sneha was asked about her husband's favourite food by a fan, to which she promptly replied. llu Arjun is one actor who never fails to grab our attention. The South Indian superstar makes waves with every movie and role he does, and manages to storm not just the south India but the entire nation. His last stint with Pushpa is still making waves all over the world, and has created a buzz all across the entertainment industry. Besides his excellent acting skills, and his chic style statement, Arjun's fans love the actor’s dedication towards his family. The 'family man avatar' of the 'Pushpa' fame actor is adored by his fans as you can find many glimpses of the star's personal life up and close on his Instagram handle. Both his and his wife’s Instagram is loaded with posts and stories of their family vacation, meal dates and play time with the kids - Allu Arha and Allu Ayaan. Besides, occasionally you will also find posts on the 40-year-old actor's diet regime, which mostly consists of South Indian meals. While the actor is a complete fitness enthusiast, have you ever wondered what could be the superstar’s most favourite meal? Well, who better than wife Sneha Reddy will have the answer to it? And she did reveal it all.

In a recent 'Ask-Me-Anything' session on Instagram, Sneha was asked about her husband's favourite food by a fan, to which she promptly replied, "Biryani". So if you are biryani lover, then this is something you and superstar Arjun have in common, and we are pretty sure this answer has made you excited. At least, we got excited with the answer. Take a look at what Sneha shared: 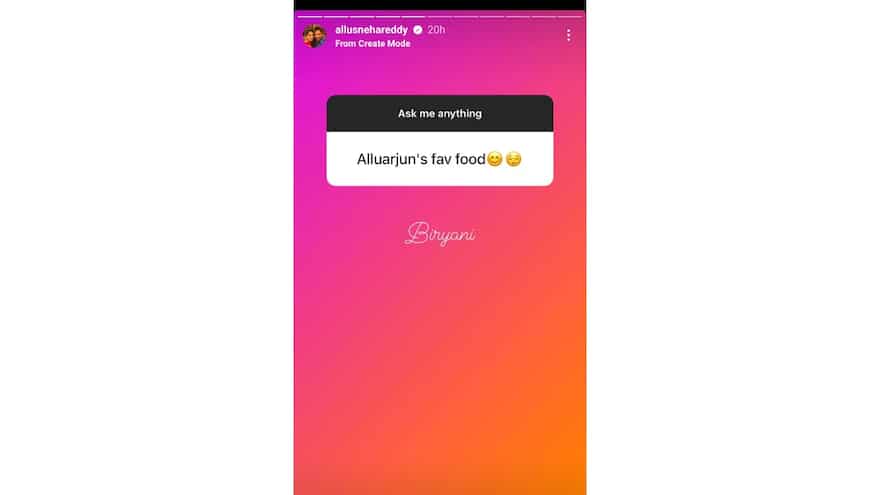 Biryani is definitely one of the most favourite foods for people across the country. Imagine the aromatic rice, mixed with juicy chunks of meat and flavourful spices - biryani defines ultimate indulgence, doesn’t it? And with its rising popularity, one can find endless varieties of it too. From egg, kathal to veg version of biryani have also found fans all across India. And to top it all, almost every region of our country has its own mouth-watering biryani. From Lucknowi, Hyderabadi to Awadhi or Kolkata, biryani has a myriad of varieties from region to region. South India is brimming with different types of biryani, and thus it comes as no surprise that Arjun loves noshing on it. If you ask me, I think he loves the world-famous Hyderabadi biryani. This elaborate Nizam preparation of rice and meat has got millions obsessed for its impeccable taste and aroma. For over four hundred years the delicacy has vowed not only Hyderabad, but managed to travel across the world and gain a reputation hard to replicate.

Now that the whole discussion on biryani has left us craving, we thought of sharing some of our favourite biryani recipes with you. Click here for 5 irresistible south Indian biryanis you must try. Try these biryanis at home to savour the best of biryanis at home. Let us know your experience.

Beyond Biryani: Five Other Local Dishes From Hyderabad