Mache Bhate Bangali could just seem like a statement but that stands much true to its meaning. Give a fish to a Bengali and he is at his happiest best. There’s nothing more that could fascinate him. It really doesn’t matter which day of the week it is, they would savour their Maacher jhol and bhaat to get that orgasmic high. It’s almost they have their love affair with fish be it a jhol, kalia, bhapa or any. From rui to pomfret, katla, tilapia, catfish and more they just know what do best with them.    Mache Bhate Bangali could just seem like a statement but that stands much true to its meaning.  It won’t be wrong to say that a Bengali meal is incomplete without fish. Only a bong can relish the adda at maacher bajar (fish market) 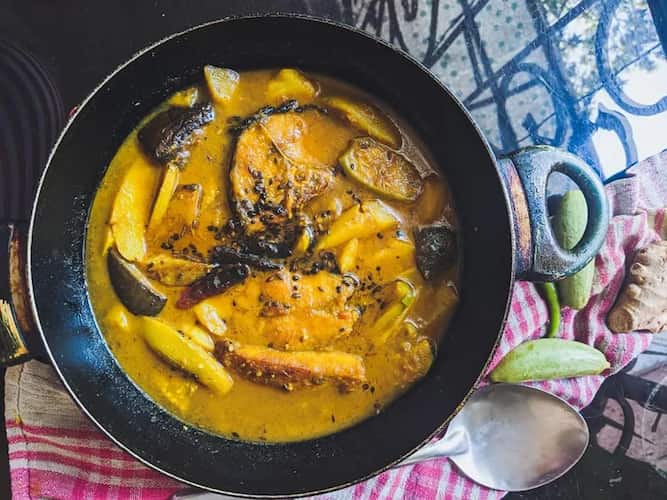 This traditional dish sees the minimalistic play of flavours as it uses just few ingredients. This light curry that goes perfect with steamed rice also sees some vegetables being added at times be it potatoes, eggplant or even cauliflower. The pieces of fish after being marinated in salt sand turmeric is lightly fried and then with some tampering of nigella seeds along with green/dry red chilies and some cumin powder and turmeric being added just makes this light runny gravy much delicious. The dish is so much famous that even a movie has been made by the same name “Machher Jhol”.

Another flavorful delicacy that too uses bare minimum spices with curd being the star ingredients is totally delightful. The fish cooked in a yogurt-based gravy that brings out a much robust aroma. The tender slightly fried pieces of fish that gets slow cooked and simmered and doused in a yogurt based sauce with minimum spices is paired perfect again with hot rice. A quick 20 mins dish will really make you have one extra piece of fish.

Mustard has been an important spice in Bengali kitchen. The iconic dish that is known for it’s pungency due to the use of fresh mustard paste is most Bengali’s favourite. Sorshe bata diye macher Jhal or Bengali style Fish in Mustard-based Curry is literally a signature dish. This quintessential Bengali style of cooking fish is done best with hilsa, though the most common preparation is with Rohu or Katla fish. This light yellow gravy only sees the tampering of kalonji seeds and some slit green chillis. A plate of steam rice and shorshe macch with a green chilli is heaven on a plate.

The way a Bengali play with fish it totally worth admiring. Bhapa means steaming and steaming the fish with mustard sauce makes it gorgeously tasty. You can choose to shallow fry the fish or keep it raw and place the pieces in a tiffin box or directly in the pressure cooker and steam it. What come out is an aromatic delight as the pungency of the mustard hits you the moment you open the container. Trust that it will leave your guests really impressed.

This dish is not close to the forgotten Qaliya it’s rather a much-adapted version by the Bengali’s. this rich thick red gravy that’s makes its presence in most marriages is known for its rich texture. Prajna Sundari Devi in her book says “Kalia calls for big chunks of veggies and is a curry and focusses on cooking the spices well. This rich gravy based dish, paired with a gondhoraj lebu and rice is a real delight.

The History Of Armenian Connect In Bengali Cuisine