Did you know that you can go and eat an authentic Thanksgiving meal any time of the year at Huber's? Vintage eateries carry a certain old-world charm. The walls of such old restaurants speak of the history of that place. Restaurants that are over centuries old, become heritage landmarks. One such restaurant in the United States called Huber’s, is located in Portland, Oregon. Established in 1879, Huber’s is one of the oldest restaurants in downtown Portland. The building and the restaurant’s fixtures tell the tale of their century old history. As you walk in on the terrazzo floor and look up, you can see arched stained-glass skylights and the mahogany paneling. The original fixtures such as spittoons, overhead lights, a pewter wine stand, cash registers, fans, and operable clocks made of brass, still remain. Walking in to Huber’s feels like you’ve just been transported in to another era. Did you know that when Huber’s was set up in 1890s there were just a few booths and bench seats in this old bar? It’s probably difficult to imagine this because where the restaurant stands today wasn’t originally where it stood at first. Throughout its history, Huber’s has occupied four separate locations, finally settling in the Pioneer Building (its current location) shortly after it was built in 1910. The beautiful dining room, which Huber's moved into in 1910, is also on the National Register of Historic Places, United States. 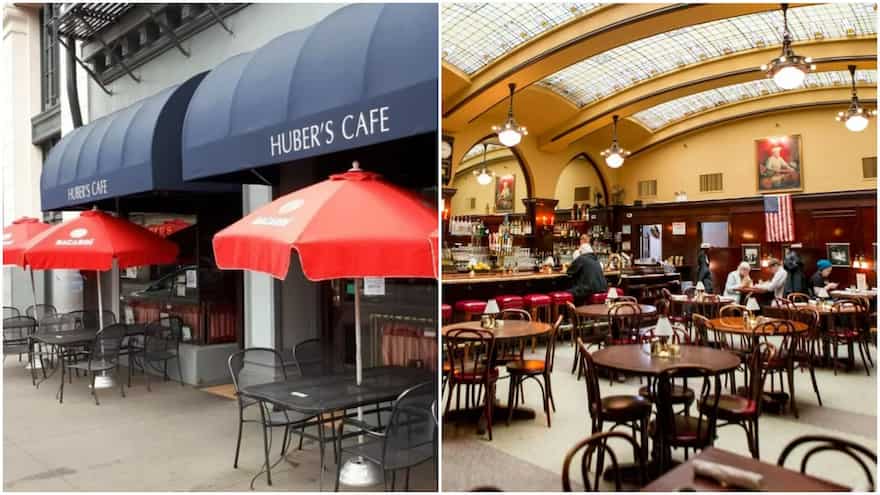 Originally called the ‘The Bureau Saloon,’ this eatery was purchased by Frank Huber and the name of the restaurant was changed to Huber's - after the new owner. In 1891, Frank hired Jim Louie, a Chinese immigrant, as the head chef. In that era, if you bought a drink at Huber’s you would get a free turkey sandwich and some coleslaw. You can imagine how diners coming to Huber’s in 1890s would go around and converse with a drink in one hand and a turkey sandwich in the other. Interestingly, this is also how the turkey tradition started at Huber's. Continuing with the tradition of preparing turkey dinners since the 1800s, Huber's is known to prepare around 100 pounds of turkey every day to make at least a dozen different dishes including the classic turkey dinner, hot and cold sandwiches, turkey marsala and more. Apart from turkey dishes, Huber’s has become the go-to choice for anyone who craves a Spanish coffee. The Spanish coffee, which is the signature drink at Huber’s consists of rum, triple sec, Kahlúa, coffee, whipped cream and nutmeg.
Read more about the Spanish coffee here. The story of this eatery could make for an interesting script for a movie someday. As the tale goes, when Frank died in 1912, Jim Louie, who was appointed by Frank as the head chef, took on the management of the business for the Huber family. At the same time, the prohibition era in the United States saw a nationwide constitutional ban on the production, importation, transportation, and sale of alcoholic beverages from 1920 to 1933. Around this time, Jim had decided to close the old bar. However, encouraged by the patrons, Jim kept the business going as a restaurant that specialized in a traditional turkey dinner. The menu eventually grew to include steaks, seafood, duck, and salads. Today the menu at Huber’s includes delicious dishes like chicken wings, soups, salads, sandwiches, pasta, burgers, beef steak selections and more. Thanksgiving meals are available all round the clock. Credit: Instagram/hubers.portland.or

So who did Huber’s belong to? The new chef who was calling the shots, or the old owners who had hired Jim? In 1941, Jim's nephew, Andrew, joined the staff and helped formalize the partnership between the Huber and the Louie family with a 50-50 deal. Andrew took over the management in 1946 when on a fateful day, Jim after working his normal day, died at the restaurant. Eventually, in 1952 even Huber's own son, Jack, sold his interest in the old restaurant to Andrew. Twenty years later, Andrew's son, James Kai Louie, joined the Huber's staff. 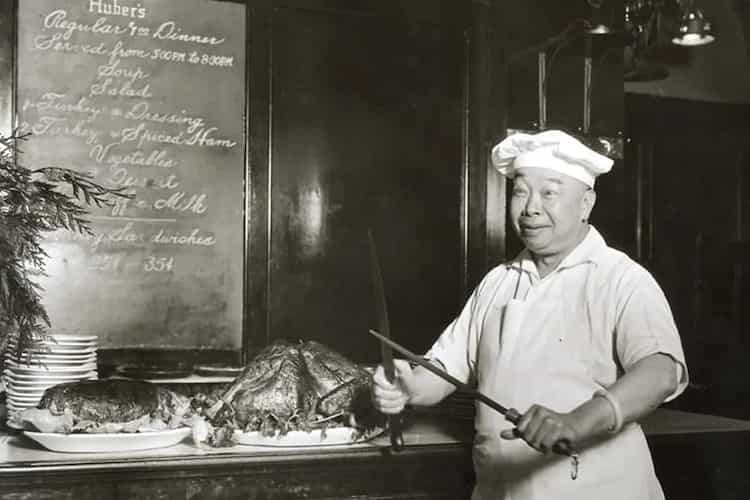 After the passing way of Andrew in 1988 and the demise of his wife in 1990, James, David and Lucille Louie became the new owners of Huber’s. James is also credited for developing Huber's signature drink, Spanish Coffee. The drink is made tableside with great flair. Did you know that owing to this special drink, Huber's has now become the largest user of Kahlua in the U.S. as an independent restaurant?

The Huber’s has today become the perfect blend of the ancient and the modern. With a menu that caters to the cuisine preferences of Gen Z and yet retains the vintage touch of the turkey tradition, Huber’s has opened its doors to graduation party celebrations, providing catering services as well as online food delivery. Recipient of many food related awards, Huber’s has struck a chord with the young and old, and thrives carrying within its doors - a lesser known tale traversing through centuries.