Too Runny Gravy? Use These Food Thickening Agents

How to properly utilise thickening agents in soups, curries, and many other dishes Thickening agents, often known as thickeners, are compounds that, when added to an organic liquid, increase its stickiness without significantly changing any of its other characteristics, such as flavour. They provide added components body, boost stability, and enhance the solubility of those ingredients. Polysaccharides (starches, vegetable gums, and pectin are examples of thickening agents), proteins (eggs, collagen, gelatin, blood albumin), and fats are further examples (butter, oil and lards). Following cornstarch and arrowroot or tapioca as the most popular food thickeners is all-purpose flour. Starch serves as the foundation for all of these thickeners.

A carbohydrate known as starch or amylum is made up of many glucose units bound together by glycosidic linkages. All green plants synthesise this polysaccharide as a form of energy storage. It is the most significant carbohydrate in the human diet and can be found in common foods including cassava, wheat, potatoes, and maize (corn). Pure starch is a powder that is white, odourless, tasteless, and insoluble in alcohol or cold water.

Basically, cornstarch is a type of flour. It is the dried and crushed endosperm of maize kernels. Soups and dishes with a liquid base, such as sauces, gravies, and custard, are thickened using cornstarch. Because it creates a translucent mixture rather than an opaque one, it is occasionally favoured over flour. It is typically used as an anti-caking ingredient in powdered sugar (10X or confectioner's sugar). To get rid of the flavour of raw cornstarch, recipes calling for powdered sugar frequently require at least very light heating. When using cornstarch, combine it first with cold water (or another liquid) to get a smooth paste, and then add it to whatever needs to be thickened. 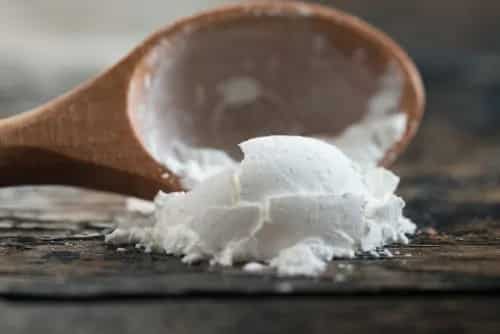 Potato flour is not potato starch. Dehydrated potatoes are pounded into a powder to create potato flour, which is significantly heavier and denser. The only starch from the potato is extracted during the production of potato starch. Gluten is absent from potato starch. Like cornstarch, potato starch must first be dissolved in a small amount of water before being added as a thickening. When thickening sauces, many people notably like potato or corn starch because it keeps the sauces clear, whereas flour makes the sauce look more cloudy. Soups and gravies can be thickened using potato starch. Never boil any liquids thickened with potato starch.

The dried, ground root of the tropical cassava plant, which is used to make tapioca, is a source of starch. Even after being frozen and reheated, tapioca maintains its quality. When employed as a thickening agent, tapioca starch dissolves entirely and turns clear. The disadvantage of tapioca starch is that it breaks more quickly than maize starch, especially at very high temperatures.

Similar to other pure starches, arrowroot is almost entirely composed of carbohydrates and contains no protein, hence it does not have the same nutritional value as wheat flour. Compared to flour or cornstarch, arrowroot thickens at a lower temperature, is less sensitive to acidic components, has a more neutral flavour, and is unaffected by freezing. Dairy and it don't mix well together, resulting in a slimy mess. For acidic foods, arrowroot is a better alternative than cornstarch, which loses thickening strength in acidic combinations. Before adding arrowroot to a hot liquid, it is advised to combine it with a cool liquid. In order to avoid the mixture from thinning, the mixture should only be cooked until it thickens before being removed. Arrowroot's ability to thicken is often broken down by overheating. A type of flour formed from rice that has been finely ground is called rice flour. It differs from rice starch, which is often made by soaking rice in lye. Wheat flour can irritate the digestive systems of people who are gluten intolerant, thus rice flour is a particularly appropriate replacement. Due to its ability to prevent liquid separation, rice flour is also employed as a thickening agent in recipes that are meant to be frozen or refrigerated.

For thickening stews, gumbos, and gravies, all-purpose flour is frequently used. To avoid the taste of uncooked flour, it must be completely cooked.  Better is to make roux, a paste made from flour and fat (often butter), is a common ingredient in gravies, sauces, and stews.

Kitchen Tips: How To Make Thick And Creamy Hot Chocolate At Home

How To Make Tomato Soup At Home: 4 Agents To Make It Thick

Thick And Flavourful Veg Manchow Soup Without Onion Or Garlic