Zakaria Street especially during Ramzan becomes a melting pot of food and culture enjoyed by all the food lovers of Kolkata. Kolkata or City of joy sees not dearth of food hubs. Be it Tangra, Dacres Lane, Terati Bazar, Park Street, the list is endless. One such street is Zakaria Street near Chitpur, one of the oldest localities in Kolkata.  Chitpur was referred as the “Black town”, as Kolkata at during the British was Calcutta was a divided into "black" and "white" towns). Famous for Nakhoda Masjid, one of the largest mosque of East India, Zakaria street during Ramzan (Ramadan), sees a buzz that’s similar to Old dilli.  A delight for gastronomes, the street is filled with biryani, kebabs, haleem, halwa etc. Most visit this market with sheer love of food. Awadhi food stalls are an perfect example of culinary heaven for one to experience.

Subhadip Mukherjee (Indian Vagabond) who never fails to visit Zakaria street during the month of Ramzan says “The Hindu girl with her long red vermillion on her head ecstatically pointed out the Dahi Vada stall to her husband. A Muslim woman passing by along with her child stopped and insisted that she tries some as it's very delicious. Zakaria Street especially during Ramzan becomes a melting pot of food and culture enjoyed by all the food lovers of Kolkata. Kebabs, Halim, Faluda, Mahi Akbari, Chicken Changezi, Sheermal, etc. are enjoyed both by people breaking their Roza and anyone who just loves some mouth-watering delicious food. Zakaria Street is beyond any religious identity.” 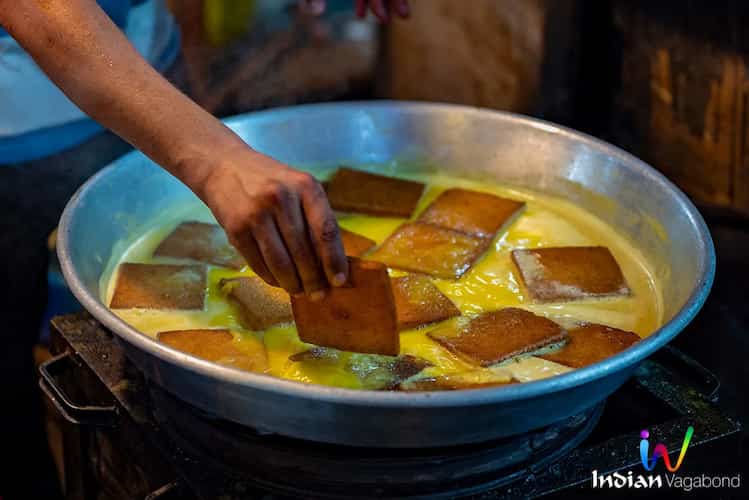 A lot of festive make shift stalls to make their presence. This pocket friendly street is a meat lovers delight. From Taskeen’s ‘Changezi chicken’ to Adam’s ‘Suta kebab’ (the kebab gets cut with a thread or ‘suta’) to fish fry made with rohu, katla and pomfret to some Dahi (boti) Kabab, Malai (sheekh) Kebab, Gurda (kidney) Kebab from Dilshad Laziz Kababs, the list is endless. Also, right around the corner is Aminia or Royal India Restaurant, Kolkata’s finest biriyani place where you can hop in for some meal scrumptious share of Kolkata biriyani. Of these dishes, the haleem at Sufia is absolutely not to be missed. Apart from the normal Haleem one also gets to taste the Arbi Haleem, Koftas, Magaz (brain) and more. This is served with koftas. Irfan Salim, who comes from far away on most days of Ramzan says “most like who are keeping the roza/ fast mostly like to go for either chicken fry, chicken tandoori and a bowl of haleem”. As you walk past the street, big chunks of chicken, meat and fish can be seen marinated all ready to be cooked.

If you are wondering on the types of breads that one might get here, mildly sweet sheermal (served with stew or tea), to the all time Khamiri to the Roghani naan and meetha naan tops the list. The flaky lachcha and the khajla can also be seen dipped or dunked a bowl of hot milk thought mostly during sehri’s. you cant end your walk without having some sherbets like Rooh-Afza, Lassi or Faluda. You can also pack some fresh local bakery stuff for your home to savour them the next day.

This Ramzan Savour Some Dalcha Gosht Hyderabadi By Chef Gaurav