This Delhi Eatery Is Known For Its Chhole-Puri And Lassi In a narrow lane in Delhi’s Kamla Nagar Market stands Bille De Hatti, a hole-in-the-wall eatery that is considered an institution among its patrons. Established in 1952, Bille Di Hatti is known for its plates of chhole and puri that are usually accompanied by creamy lassi in plastic glasses. The owner, Bille, has passed away and the eatery is now run by his nephew. It’s a popular breakfast spot, especially among university students, but a meal here can induce serious drowsiness so we recommend you visit when you have time for a nap afterwards.

Bille Di Hatti opens from 7am until 6pm, but all the food is usually sold out by 2pm. A few tables and chairs can be seen lying around for customers who rush to grab a spot early in the morning. The menu is standard: chhole and puri served with sliced onions and pickle. For those really looking to add that Punjabi touch, the place also serves sweet lassi. A large glass costs ₹60, and a small one ₹40. A plate of chhole and two puris, with pickle on the side, comes for ₹60. 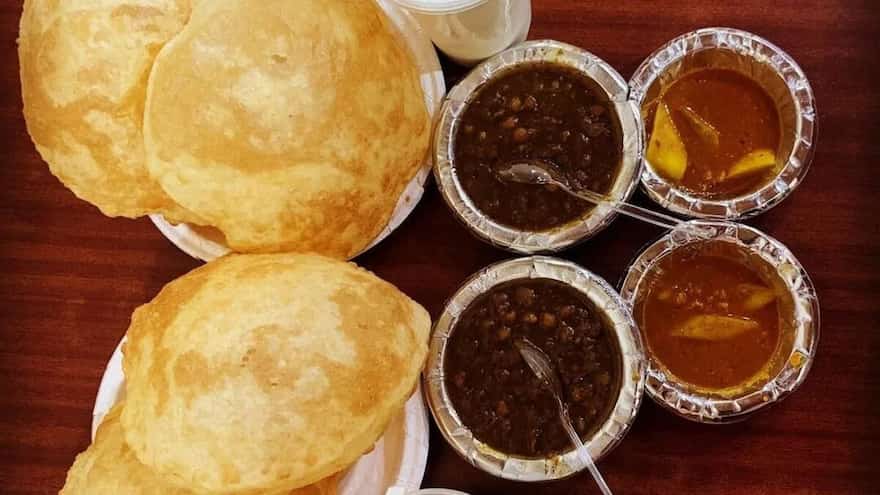 According to a 2019 article in The Hindu, the chhole used for preparing the meals are sourced from Sudan. They’re different from the chhole served with bhature at other establishments in Delhi and have their own characteristic flavour that is neither too spicy nor bland. There’s no hint of oil in them and they go well with the sliced onions. The puris are soft, fluffy and perfectly round.

The lassi, one of Bille De Hatti’s main attractions, is served topped with a generous amount of malai. It works like a sedative, especially when had with a plate of chhole-puri. The combination is an important part of Punjabi cuisine and culture, and while it’s not typical Delhi food, it’s still popular with the city’s residents.

The humble pricing and great food make Bille Di Hatti an appealing place to people from across the city. Many people drive down early in the morning for a rich breakfast that is also comfort food. Bille De Hatti now has other outlets in Delhi, including one in Patel Nagar. However, the one in Kamla Nagar is the oldest one. The place is a marker of Delhi’s food culture, which welcomes influences from around the country.

The Best Cafes For A Regional Indian Lunch In Delhi

The Story Of A Delhi Coffee House That Started In 1957

The Best Places For Dal Makhani In Delhi