This ‘B. Tech Chai’ Is Run By Three Engineering Graduates In Kerala

'B. Tech Chai' offers over 50 flavours of Chai. The most loved is 'Ginja' a Special Indian Masala Tea. COVID-19 was a major setback for everybody. A lot of people lost their jobs in organized as well as unorganized sectors and even lost their only source of income. People were confined to their homes and wanted to get out as soon as possible. Among the thousands of techies who lost their jobs were three Engineering graduates Anandu, Mohammad Shafi, and Shanavas from Kerela’s Kollam District.

Anandu and Mohammad Shafi were classmates during their B. Tech Electrical Engineering days and tried their luck with several tech companies in Kerala before they had to face the wrath of unemployment while Shanavas, who holds a degree in Mechanical Engineering, worked in tech companies in middle east and Gujarat before the lockdown was imposed. After they lost their jobs, they tried their best to look for new opportunities but got nothing. Even after the lockdown was lifted, the market showed no signs of improvement. But it is truly said that every difficulty brings opportunity with it. It was then they decided to stop searching for jobs and start their journey as entrepreneurs. This spirit gave birth to ‘B. Tech Chai- A Chai With Logic’. Opened in the year 2021 in Kollam, this unique tea stall became an absolute hit among the local people. It was just not the unique name of the tea stall, but the unique flavours of tea served. Over 50 unique flavours of tea are served at B. Tech Chai and all these are developed by Anandu, Mohammad Shafi and Shanavas themselves. The most amazing fact is that all these amazing tea flavours range from just Rs 9 to Rs 45 i.e. the price of the most expensive tea. Exotic tea flavours that too at pocket-friendly rates. How great is it!

The most unique and exotic chai they serve is ‘Ginja’ which is a special Indian Masala tea. Anandu, in an interview, had revealed that special Indian Masala chai is a mix of special ayurvedic herbs. They basically tried the ‘try and error method’ until they got the right combination.  Anandu told though they opened the tea stall in 2021, he had the idea of it for the last two years but since he and his friends were working, they could never turn it into reality. Amazingly, B. Tech Chai is built around a pull-cart which is efficiently retaining the common street food feel and especially caters to the people passing through the area and commuters. 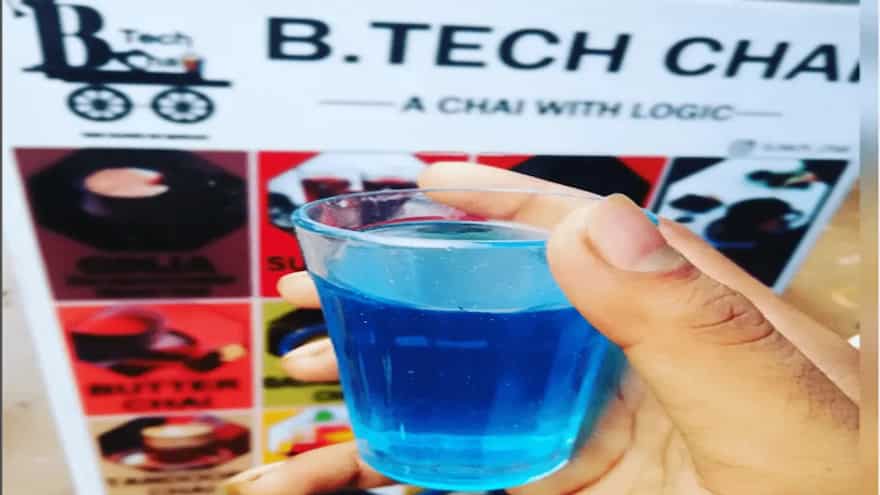 But like every other success story, Anandu and his friends too faced many obstacles on their way. Their journey was not easy. From making up the menu to designing the cart to convincing their parents, they went through a lot but managed to fight all the hurdles and brought their dream into reality. For a middle-class family, it would be more than a shock that their Engineering graduate children will run a Chai stall. The same happened with the families of Anandu, Shafi and Shanavas.

But after somehow managing to convince their parents, they had a huge problem in raising capital. Neither they had savings nor did they get financial support from their families. All they were dependent upon was small amounts lent by their friends. In all, friends raised Rs 1.5 lakh and this was when they bought the cart.

In just a duration of one month, the B. Tech Chai gained so much popularity that Anandu and his friends had never thought of. It hasn’t stopped as with each passing day, their popularity and love among people is increasing. Anandu has even started getting franchise inquiries. Now, Anandu, Shafi, and Shanavas have been working towards expanding it as a brand. Anandu and his friends showed that not getting a well-settled life with a perfect is definitely not the end of life. One can always find opportunities to grow just like Anandu, Shanavas and Shafi got.

Let us know if you have been to 'B.Tech Chai' and tasted those unique tea flavours.