These Steps Will Help You Make Ricotta Cheese At Home

Ricotta produced from scratch should taste like the most recent full-fat milk. Excellent milk can be used to make fantastic ricotta Making ricotta is a fantastic idea and turning milk into cheese is a lovely thing. To produce fresh cheese, though, who has the time? It turns out that you most likely do. Three ingredients and a few hours are all it takes to make two pounds of fresh ricotta that is fluffier and more flavourful than any store-bought kind. This recipe relies on buttermilk rather than the acidic substances that are often used in homemade ricotta recipes to separate the curds from the whey. A rough and gritty cheese is produced when strong acids denature the milk proteins. Buttermilk contains less sour lactic acid naturally, which causes the curds to grow gradually and have a light, velvety feel.

Also read: Ricotta: The Cheese Made From Waste Products

Because there are just three ingredients, you must find the best you can. The freshest full-fat milk should be the flavour of homemade ricotta. You can make excellent ricotta by using excellent milk. The cheese curds won't form properly if you use ultra-pasteurized dairy that has undergone a high-heat processing procedure. Don't throw away the whey that remains even if ricotta is the star and shines in recipes. It works well as a partial or whole liquid replacement in yeasted bread recipes, giving the bread a nice tang. It does a fantastic job of simulating the rich flavour of sourdough bread. Suitable for spreading with fluffy ricotta. 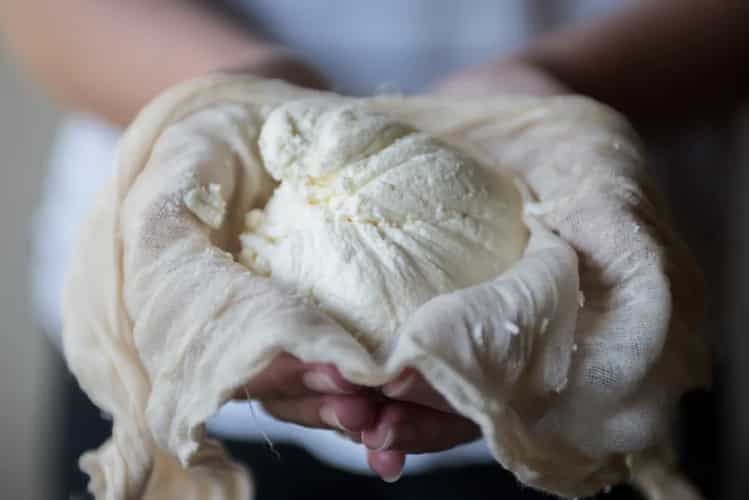 Allow to rest, undisturbed, for two to three hours to allow curds to form and float to the top. Yellow whey that is transparent will surround the curd.

Place a colander over a sizable, deep bowl; line with two layers of moist cheesecloth, leaving an overhang of 6 inches.

Scoop curds in large chunks using a fine wire-mesh strainer and transfer to the prepared colander.

Ricotta should be drained while at room temperature. If desirable, save the whey for later use. Lift the ricotta while gathering the cheesecloth's corners. Squeeze out any residual clear whey by gently twisting.

The majority of homemade ricotta recipes call for acidic lemon juice to assist form the curds, which can turn tight and rubbery. Professional cheese producers use the enzyme rennet, which is used in the production of commercial cheese. When opposed to recipes that call for lemon juice, buttermilk makes more than twice as much ricotta and gently converts the milk in this recipe into curds and whey.

Recipe: Om nom nom your way through Tuesday with spinach and ‘ricotta’ ravioli

Ricotta: The Cheese Made From Waste Products