7 Most Popular Cocktails In The World

Cocktails that are traditionally thought as an American innovation, but cocktails also do see a much British inspiration and punches like the use of fruit juice, spices, and more, that was consumed in punch houses around 18th century. Cocktail have always ruled the drinking world. Everybody fancies a well-done cocktail, served in a fancy glass and so on. But remember adding a lemon slice or a nice fancy little umbrella to your glass doesn’t make it a cocktail. There’s a a lot that goes into making an amazing cocktail that becomes world famous and also tops the list as the most popular cocktail in the world. Going back to history, it sees many interesting and amusing stories, and also sees many conspicuous stories. The whole idea of creating this fancy drink has been there since ages as alcohol brewing had been happening for centuries. Cocktails that are traditionally thought as an American innovation, but cocktails also do see a much British inspiration and punches like the use of fruit juice, spices, and more, that was consumed in punch houses around 18th century. The word cocktail documented and used  in publications from 1798 and 1803.

With a bunch of cocktails that has been around for centuries, let’s see the one’s that have topped the list over the years.

Using brandy as a base, Sidecar gives brandy it’s much unrated importance. One of world’s most ordered cocktails, the drink sees a mix of brandy, lemon, and triple sec, making a tart, refreshing tipple. Sidecar is said to be evolved from the original sour formula. This Caffeinated drink is an all time favourite/ 1859 Oregon magazine

This caffeinated alcoholic drink that sees Irish whiskey, hot coffee, and sugar, stirred, and topped with cream give you both the caffeine and alcohol high. Created by Irish chef Joe Sheridan in the 1940s this drink is absolutely delicious and calls for a second glass.

With rum as a base, Mai Tai is made from rum, Curaçao liqueur, orgeat syrup, and lime juice and is a cocktail from the tiki culture. This cocktails also sees many variants from time to time. Once upon a time in tiki themed bars this was hit.

This tequila-based cocktail which tops the list of most ordered cocktail across the bar, is made with some orange liqueur, and lime juice nd is served with salted rim glass. It’s either served frozen and blended or without ice straight up. This drink served in a margarita glass. 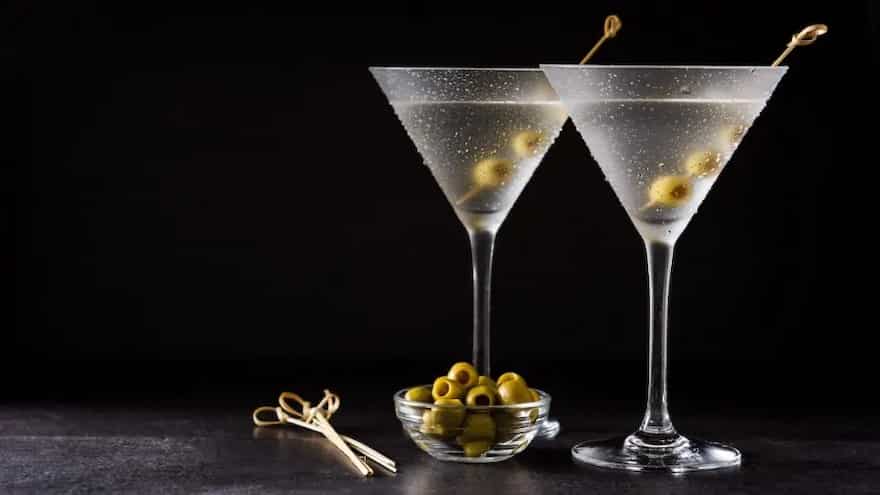 This drink is garnished with Olive or Orange twist/ Unsplash

A classic martini is made with gin but the vodka martini as the name says sees vodka, dry vermouth, and ice. Garnished with some olives or a lemon twist, this drink is served in a chilled martini glass. The recipe is simple and quick to make.

Made with Prosecco and peach purée or nectar, this cocktail originated in Italy. This sparkling cocktail is fizzy and refreshing. This brunch favourite cocktail is kinda alternative to mimosa. You can also make Bellini with real peach purée.

This cocktail sees the maximum number of alcohol mix like vodka, tequila, light rum, triple sec, gin, and a splash of cola and is served in tall straight glass. The drink get’s its name from the so-called resemblance to ice tea. This one sees a whopping 22% alcohol concentration.

What makes vermouth so critical to a good cocktail