The Way of Awadhi Cuisine: A Taste of Lucknow

You can savor the best Awadhi food when you’re in the city of Nawabs- Lucknow. There are many iconic food spots there that serve the most delectable meals. You should definitely try the Galouti kebab with ulte tawa ka paratha to know what we’re talking about When someone mentions Awadhi cuisine, it conjures up images of kebabs, kormas and biryanis. It is indigenous to the land of Awadh or Oudh, in Uttar Pradesh. Flavors of Awadhi cuisine were inspired by the Mughlai, Kashmiri and Hyderabadi cuisine and most if its cooking style requires ‘dum pukth‘. The cooks or bawarchis spent a lot of time perfecting Awadhi recipes that were relished by the Nawabs. All the ingredients used in Awadhi cuisine are rich and are added precisely to perfect the dish.

You can savor the best Awadhi food when you’re in the city of Nawabs- Lucknow. There are many iconic food spots there that serve the most delectable meals. You should definitely try the Galouti kebab with ulte tawa ka paratha to know what we’re talking about. Binge on Awadhi mutton or chicken biryani, and you’ll see the difference between the other biryanis served in the country. Let’s tell you about some Awadhi food gems that will leave you salivating.

Galouti kebabs are prepared with minced mutton, spices and raw papaya that tenderizes the meat to make the kebabs soft. Galouti kebabs and ulte tawa ka paratha, mint chutney and onions rings are a match made in heaven. Legend has it that Galouti Kebabs were especially made for the nawab of Lucknow after he had lost all his teeth but wanted to eat kebabs.

The royal kitchens of the nawabs were where some of the most delicious foods were cooked. Awadhi chicken is another blissful recipe where chicken pieces are cooked in a tomato, yogurt and cashew nut gravy. Melon seed paste is also added to the gravy to further its richness. It can be served with butter naan, rumali roti, onions and chutney.

Kormas are made with meat and vegetables cooked in a meat stock, with yogurt or cream. It can be made with either mutton or chicken and is spiced with whole spices like cinnamon, bay leaves and cardamom. Coconut cream is also added to the korma to increase its flavor. It should be eaten with flaky warqi paratha for an authentic experience.

Pasanday or pasandas were a favorite among the royal nawabs of that time. It is boneless mutton pieces flattened with a mallet, and rubbed well with a mixture of spices, yogurt and raw papaya. It is left in the marinade overnight and next day cooked in a pan with ghee. Pasandas taste great with naans and rotis. 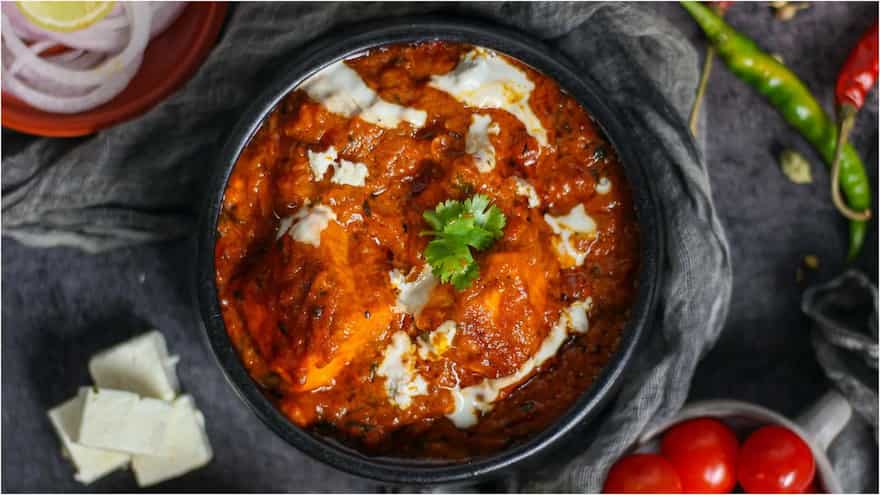 Awadhi Paneer is made with onions and ghee | Pexels
A popular dish among the vegetarians, Paneer do pyaaza is cooked in a lot of onions, whole spices and ghee. You can also cook this recipe with tofu, or mushrooms for a twist.

We owe the Navratan korma too to Awadhi cuisine. This dish is cooked with vegetables like carrots, peas, beans, cauliflower, nuts, and fruits in heavy cream. It is the perfect vegetarian dish to enjoy when you’re craving for some rich food from Awadhi cuisine. Enjoy navratan korma with some rumali rotis or naans.

Awadhi chicken biryani is sold all over Lucknow and is known for being cooked meticulously with layers of spiced meat and fluffy long rice. The meat is marinated in whole spices and yogurt and then slow cooked while the rice is par boiled with ghee and spices. The layering of rice and meat is done in a huge handi which is slow-cooked on a dum resulting in an awesome biryani.

The nawabs never compromised on their food items, and due attention was paid to their breads too. Ulta tawa means inverted griddle and here the rotis were cooked on the back of the tawa before serving them with Awadhi curries.

Sheermal is a type of bread inspired by Persian cuisine. Sheermal stands for milk and saffron infused bread prepared in ghee. The dough for it is prepared with flour, milk, sugar, ghee and saffron. The rotis are crisp and filled with nuts and raisins. It pairs well with Lucknowi kebabs and can be had like that as well.

Awadhi Badaam Halwa is so rich that it will make you feel full after eating just one bowl of it. In this recipe, almonds are soaked, ground and cooked with huge amounts of ghee. They are garnished with saffron and almond slivers resulting in a heavenly yellow badam halwa. When in Lucknow you should try kaali gajar ka halwa, and kaju halwa apart from this almond halwa.

This Famous Awadhi Kheer Remains 'Nameless' Till Date, Guess Why?