One of the greatest literary figures that the world has seen, Emily Dickinson’s ‘confessional poetry’ is widely read and appreciated even today. Her extraordinarily bold, honest and sensitive verses made her one of the leading 19th Century American poets, whose haunting personal voice echoed among many of us. But how often did we hear about Emily’s adventures in the kitchen? Probably, very rarely. The reclusive poet - who loved the quietude of her home in Amherst, Massachusetts - would whip up a storm whenever she donned her baking apron. Her signature ‘Black Cake’ is a globally famous recipe that has time and again piqued the interest of foodies and lovers of literature alike. In fact, the original manuscript of the recipe - which she had sent in a letter along with flower cuttings to her friend Nelly Sweetser during 1883 summer - is now a treasured possession at Harvard University’s Houghton Library. Facebook/@HoughtonLibrary; a digital facsimile of the recipe’s original manuscript, which is now preserved at Harvard University’s Houghton Library

Syrupy raisins and brandy are at the heart of this traditional Christmas cake recipe that bears a resemblance to that of the English fruitcake. The dark cake is also spiked with loads of spices including nutmeg, clove, mace and cinnamon, along with a generous dose of molasses. Result? It’s sticky sweet! Another interesting fact about the original ‘Black Cake’ recipe is that as many as 19 eggs went into the batter, with it finally weighing over 20 pounds. The cake was said to be baked around the time of her birthday on December 10, and it apparently lasted for months.

The poet’s fans around the world still celebrate her birth anniversary by baking their own versions of the famous ‘Black Cake’. No wonder, several toned-down recipes now float on the internet, sporting different ingredients and techniques for baking, of course. Even the Houghton Library has its own version of the recipe. Interestingly when she was alive, more than her poetry, Emily was well-known in the Amherst neighbourhood for her cooking prowess, especially her desserts. Although she wrote nearly 1,800 verses in her lifetime, only a handful of them saw the light of the day before she passed away in 1886, at the age of 55. Such was the popularity of her ‘Black Cake’ that almost a century after her death, it even featured William Luce’s 1976 one-woman play The Belle of Amherst. Actress Julie Harris won the prestigious Tony Award for her performance in the play. Cut to 2021, the cake finds a mention in the second season of Christopher Storer-directed television series Dickinson, titled Fame Is a Fickle Food. Instagram/@patchworkduck; brandy and raisins are important ingredients in the original recipe

A book - titled Emily Dickinson: Profile of the Poet as Cook with Selected Recipes - authored by Jean McCl Brose, Nancy Harris, Juliana McGovern Dupree and Wendy Tocher Kohler includes the lesser-known gems that she created in her pale-green-walled kitchen. It is said that Emily started making bread at home at the age of 14. There were instances when she would treat kids playing on the premises of her family home to her delicious gingerbread. Cheesecake, coconut cake and soup were among the other dishes that she mastered. Needless to say, her poems were inspired by the times she spent in her ‘favourite room’ in the house. Instagram/@patchworkduck; a piece of the baked delight

Coming back to ‘Black Cake’, there are theories according to which a Caribbean Christmas cake - which is known for its piquancy and includes rum and molasses - may have an influence on her recipe. Mind you, we are talking about a time when colonisation and cases of slavery were at their peak and that saw many immigrant domestic labourers working in New England’s elite homes. However, what it probably reflects is that Emily was well aware of her surroundings and the people she spent her days with, apart from her own family members and her special companion. It exhibits a rare sensibility that she expressed through her poetry and the food she cooked. Delving a little deeper into the history will tell you that the ‘Black Cake’ recipe - both Emily’s and the Caribbean version - owe a lot to the generous dose of aromatic spices that it includes. These again made their way into coastal America following the colonisation of the spice coasts of India, Sri Lanka and Indonesia. 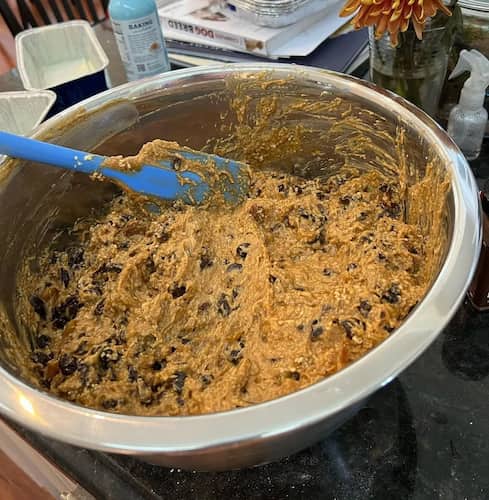 Instagram/@patchworkduck; a modern take on the historic recipe

Intrigued to try out Emily’s famous ‘Black Cake’ recipe? Although different renditions of it are now available online, here’s how the original recipe roughly read:

Beat the butter and sugar together

Add eggs without beating and beat the mixture again

The Legendary Christmas Fruit Cake Was Once An Energy Bar, Did You Know This?

The Story Of Breudher, The Dutch Cake That’s Also Found In Kochi