The Science Behind Eating On A Banana Leaf

The whole science behind using banana leaves is that they are loaded with loaded with nutrients. In our modern lifestyle we really don’t much care as to in what utensil we are eating. It could be bone china, melamine, or stainless steel or even some old school houses still eat in kansa and bronze plates. But the truth is we really don’t take much care about our plates in our food is being served.

But if we go back in time, we would see most times at our home’s food was served on banana leaves. Even during any function this was the preferred choice of plate. Going back in time we could see that in India serving food on a banana leave was always prevalent not just during puja but generally too. Banana leaf o even the banana plant was used rather is present most rituals that are linked with “Lord Ganeshji”. In that ancient literature, there is a special mention about eating food on banana leaves after any religious pooja’s or rituals which can bring prosperity to our life. Mostly seen in the southern and the Eastern part of the country the use of banana leaf was considered quite sacred. The large leaves are used for multi purpose. From serving a full-fledged sadya to using it for offering bhog, the leaves are cut accordingly and food is served on it. Plating a full meal on a banana leaf looks much appealing. The size of the lead makes it much convenient and it looks like a huge plate. The whole science behind using banana leaves is that they are loaded with loaded with nutrients. So when food gets served on banana leaves that is loaded with polyphenols, which are natural antioxidants the food that you are eating gets enriched with several nutrients that we might miss on. banana leaf also sees polyphenol oxidase and anti-bacterial properties that will kill the germs in the food if any. All the more the leaves being waterproof, any curry or gravy based dish that is served on the leaves doesn’t get soaked spoiling the taste of the dish. Hence this waterproof nature of banana leaves makes it a great choice for the natural plate. The glossy coating on the leaf  adds on a subtle flavour that the banana leaf hold and also helps to keep the food that is served hot.

Being use and throw you dint need to wash them for later use. Once used it can be thrown without the fear of polluting as it’s environmentally friendly and bio degradable. It can be decomposed easily and doesn’t get soggy. This eco friendly option is less harmful for health and even for environment. 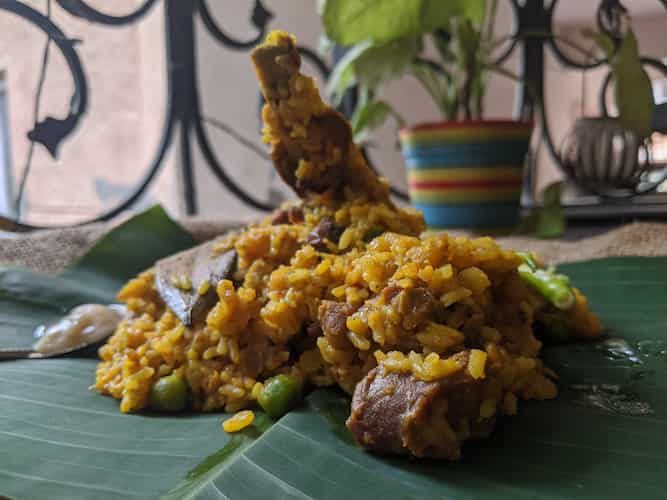 Even in Ayurveda, this leaf sees a mention. Few conscious eaters are designing utensils from banana. Also the fact that banana leaf is not just used for eating but also for cooking. A lot of steam dishes  are made inside wrapped in banana leaf and interestingly the lead itself can be used as a plate to eat, cutting the extra effort.

Rude food by Vir Sanghvi: The price of bananas and boiled eggs