Malyasia Or Goa: Where Does Dodol Really Come From?

This sweet cake is so synonymous with Goa, but its origins are far more international than we think. If you’ve ever seen Dodol, it’s probably sharing ad or shelf space with Bebinca – usually the legendary Costas. Seeing it in this setting alongside a dessert we know is so quintessentially Goan makes it seem like Dodol too is a true blue homegrown dessert. But in fact, it’s not only well-travelled, but it also has international appeal.

To know more about its true nature, let’s start with what it is and where it came from. It’s a sweet dish with a chewy, caramel texture that is made with rice flour, palm sugar and coconut milk. Some scholars trace its origin back to 1926 in Betawi, Indonesia where Dutch colonials were in power. This is a very plausible origin since, in Betawi, agriculture was the mainstay of society and using rice flour as the base for a dessert is a very logical transition.

The Malay culture also holds claim over Dodol as a type of ‘kuih’ or cake that according to researchers symbolises the Malay identity and represents the history, lifestyle and heritage. It also has various other names within Malaysia itself In Malaysia, with the people of Negeri Sembilan and Melaka, referring to it as penganan and kelamai, respectively. With the onset of trading activities with the West and with Arabs, Malaysian stapes began to have a wider audience.

There are some differences when it comes to the preparation methods between countries. Indonesian Dodol is made with coconut milk, glutinous rice flour, granulated sugar, brown sugar and salt, and additional ingredients are added at the end which determine the type of Dodol it is. For example, if durian is added it becomes Dodol Durian while Dodol Nangka contains jackfruit.

Kalamea – as Dodol is known in Thailand – is very similar in method to its Malay cousin. There are however two distinct types, using rice grains (kalamea med) and one with the more common rice flour (kalamea pang). The second method tends to be preferred for commercial use because of its speed while the first is usually used at home. 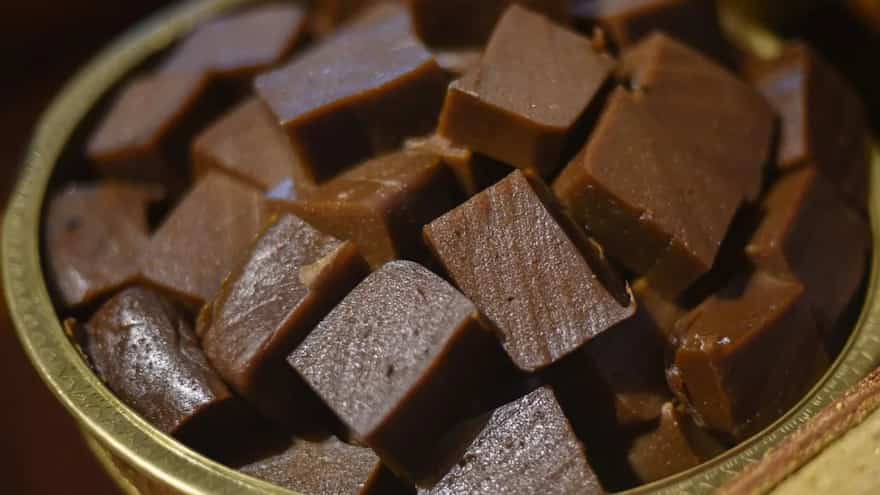 Dodol also has a stronghold in Sri Lankan cuisine thanks to an influx of people from Bali, Java and the Malaysian peninsula during the Dutch Colonial period. Kalu Dodol as it’s known there is made with the usual suspects of rice flour, coconut milk and palm sugar or jaggery. The only difference is that while most countries use more glutinous rice flour, Sri Lanka favours flour from local rice varieties which have less gluten content. They also use jaggery from the foxtail palm or kithul palm which lends a deeper, smoky overtone to the dish.

Dodol is favoured in most of these places as a daily treat but it's often tied to celebrations as well such as Christmas in Goa, Songkran in Thailand, Hari Taya in Malaysia and the Phillippines and many many more. It even makes features in East Africa and Java, where it is similarly beloved.

It seems like Bebinca has been hogging the spotlight for far too long considering that Dodol has a history and a fan base that trails across the Eastern world and beyond. Perhaps it's time to give this sideline Goan dessert its dues.