The sweet dish—made with vermicelli-like dough soaked in sugar syrup, layered with soft cheese, drizzled with rosewater and topped with pistachios—has a lengthy history. It is undisputed that knafeh hails from Nablus, a Palestinian city in modern-day West Bank. In fact, Nablus holds the Guinness World Record for the largest knafeh (which was 74 metres long and 1.05 metres wide) ever made. However, some sources state that it can be traced back to the Umayyad dynasty, when it was eaten as a filling suhoor meal (the morning meal before fasting for Ramadan begins) in the Syrian city of Damascus, while some others say it originated in 15th century Egypt.

Popular in the Arab territories, especially the Levant, Egypt and of course Palestine, different variations of knafeh can also be found in Turkey, Greece and the Balkans.

The sweet dish—made with vermicelli-like dough soaked in sugar syrup, layered with soft cheese, drizzled with rosewater or orange blossom and topped with pistachios—has a lengthy history, which is as old as the conflict between Israel and Palestine. Nablus, being 30 miles from Jerusalem, cooks up a bright orange version of knafeh with a local white cheese called ‘jibneh Nabulsi’. Israel has claimed knafeh as its own, without crediting Palestine for its invention, and this has been the reason for many tensions. A Buzzfeed advertorial with the headline ‘17 Incredible Desserts From Around the World’ became the subject of controversy because it listed knafeh under the Israel section (the article was deleted in 2014). 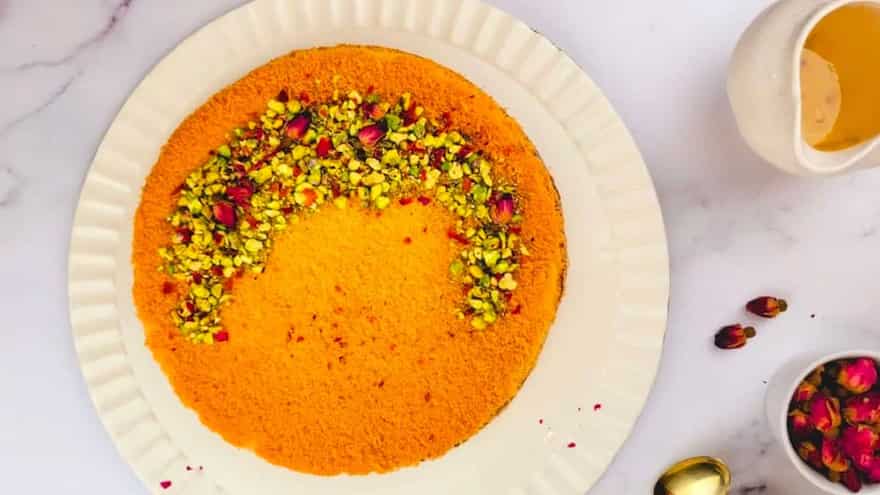 Despite its tendency to spark conflict, knafeh is also seen as a symbol of goodwill after a conflict has been resolved, and is prepared to help cope with grief after someone may have died, and also during happier times when someone achieves an important milestone.

There are two types of knafeh. One is ‘khishneh’, which has a rougher texture and is topped with shredded phyllo dough (kataifi). The other is ‘na'ameh’, which is smoother and topped with ground semolina dough (farkeh). The type of cheese varies with the region.

Different spellings of the word are used in different countries and include knafeh, konafa, kunefe, kenafe, knefeh, and kunafa, the root word being ‘kanaf’, which means to shelter or protect in Arabic. It’s likely that this word was chosen to refer to the two layers of dough that hold cheese between them.

People around the world are slowly discovering the appeal of this dessert. Trader Joe's, even released a frozen version in the US. In Delhi, the dessert parlour Kunafa serves the dish under the name ‘kunafa bel jibna’.

Knafeh can also be found in Azerbaijan and Turkey. Each country has its own variation of the recipe. Syria uses rosewater and Lebanon orange-blossom water for the syrup that is drizzled on top of the dessert. Armenians even add cinnamon, and Egyptians are known to use clotted cream instead of cheese.

The dessert is eaten as a weekly tradition in many households. Some families eat it while playing cards, smoking hookah or just enjoying the company of their family and friends.

5 Scrumptious Indians Desserts You Can Make With Milk Powder

Have You Tried These Nepali Desserts?