For the uninitiated, a Sunday roast is a traditional British meal, comprising roasted meal, roast potatoes, gravy, stuffing and more. In one of her old interviews, British actress Emily Blunt confessed about being incredibly nervous when her American husband and actor John Krasinski offered to cook her a typical English roast. Why should such a sweet romantic gesture bring jitters to someone, was beyond me. As per Blunt, Krasinski excelled the task, but soon I found myself reading more about the English roasts, the Sunday roasts to be particular.

For the uninitiated, a Sunday roast is a traditional British meal, comprising roasted meal, roast potatoes, gravy, stuffing, Yorkshire pudding, and condiments such as apple sauce, jelly and mint sauce. It is typically served on a Sunday and the tradition is also popular in a bunch of English-speaking countries such as New Zealand, Australia, Canada and South Africa with few variations. For instance, in a South African Sunday roast, you would find rice and gravy, and Yorkshire pudding could be absent.

The meal is actually more wholesome than you think, because of the inclusion of vegetables like Brussel sprouts, carrots, cauliflower, parsnips that are served alongside the meat; mashed potatoes is another popular side, providing ample fibre and carbs in one serving.

The indulgent meal can be referred to as a mini replica of the lavish Christmas dinner, compelling you to think that there could be a historical link connecting the two, but that is not the case.

There are many fascinating legends associated with the origins of the tradition. It is said that the Sunday roast originated in the British Isles, as a meal to be consumed after church on Sundays. Post Church feast was common across Europe, but Britain, especially Yorkshire took it a notch up.  Sundays were also convenient for these roasts, as on Sundays, eating all kinds of meat was permissible. Many Anglicans and English Catholics fast before Sunday services, which made Sunday Roasts an event to look forward to, something to celebrate and mark the end on meat-based restrictions. The tradition of Sunday roasts, also somehow, gave a boost to other mini traditions such as ‘Fish Fridays’. Since on Fridays, Anglicans refrained from eating meat, they feasted on fish. 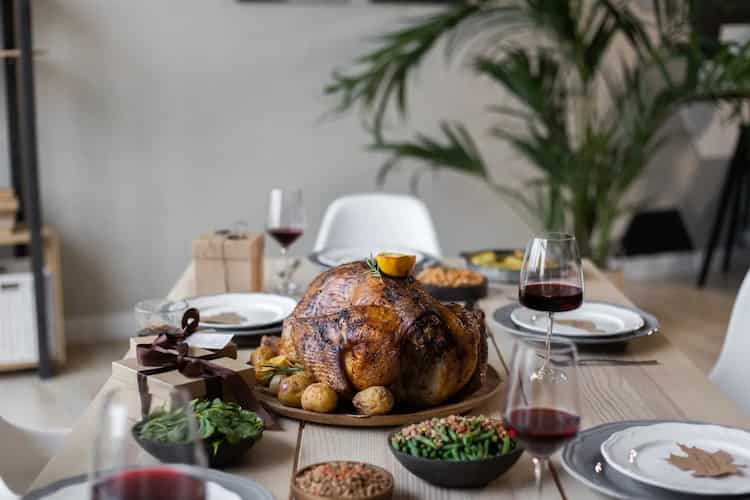 Sunday Roasts evolved drastically, keeping pace with the socio-political milieu of the time. As per legends, during the industrial revolution of the late eighteenth century, families in UK would cut a piece of meat and keep it in the oven as they got ready for church, and chop potatoes, turnips, and parsnips too and leave. When they would head back, the juices from meat and veggies would be used to make gravy and the meat would be cooked in its own drippings.

Another fascinating legend suggests the Sunday roasts may in fact be a medieval phenomenon, bringing a feudal angle to the mix. As per this theory, the village serfs would feed squire for six days a week. On Sunday, after church services, serfs would exercise their techniques on a field, flaunt their strength, and be rewarded with a feat comprising roasted meat, put together on a spit.

Yorkshire Pudding: A Brief History Of Our Favourite Savoury Pudding

Christmas In South Africa: Did You Know They Have A Lavish Christmas Feast Like The English?