The Cuisine Of The Tribes Of Arunachal Pradesh

Tribals from the Singpho community mostly eat boiled food, instead of dishes that are fried or roasted. Among discussions of butter chicken and dosa, a lot of regional food from India is sometimes neglected. The Northeastern states are home to some diverse and rich cuisine, even if they may be excluded from these conversations. Even when food from Northeast India is talked about, there can be misinformation, stereotypes and a lack of knowledge. Some people believe that people in the Northeast only eat meat, while others think that the cuisine of the region is always spicy.

It’s important for these myths to be debunked and a good place to start is the cuisine of the tribes of Arunachal Pradesh, which is located in the extreme Northeast of India. Arunachal Pradesh is home to a large number of tribal communities. Three of the major tribes include the Singpho tribe, the Adi tribe and the Nyishi tribe.

The Singpho tribe is one of the most prominent tribes that exist in Arunachal Pradesh. They can be found in nearly every corner of the state, but are mostly concentrated in the Lohit and Changlang districts. Tribals from the Singpho community mostly eat boiled food, instead of dishes that are fried or roasted. Both steamed rice and sticky rice are eaten as staples. The Singpho tribals prepare a variety of dishes that use potatoes as the main ingredient. Aloo pitika is one such dish that is made with potatoes. When compared with other cuisines from the Northeast, traditional Singpho food is less spicy but still flavourful. Much like the Nagas, the Singphos too appreciate the taste and aroma of bamboo shoots and add it to many recipes that use ingredients like pork, chicken and dried or roasted fish. 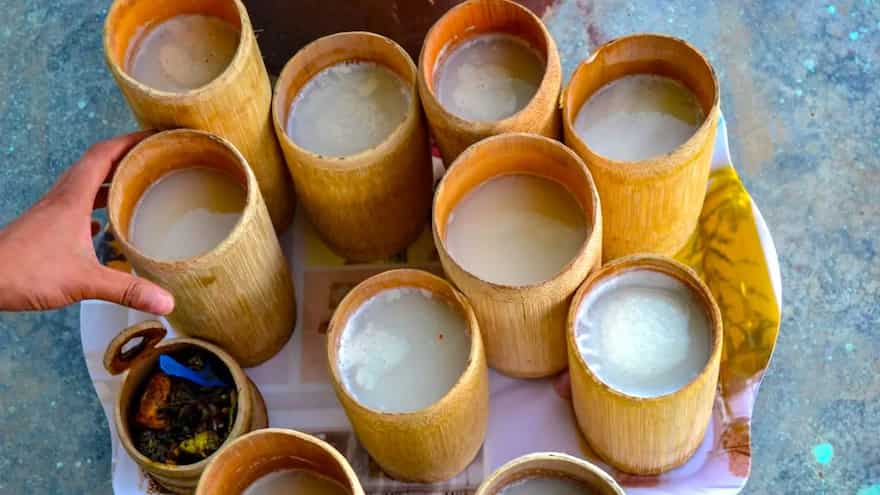 Rice beer is a staple drink that accompanies main courses prepared by the tribes of Arunachal Pradesh.

The Adi tribe can mostly be found in some regions of the Southern Himalayas, which border Arunachal Pradesh. They follow a balanced diet, of which stews are an important part. One such vegetable stew, which is prepared with potatoes, peas, greens and many other key ingredients, is called ‘oying’. Bamboo is commonly used as a primary ingredient in many Adi tribal recipes and is added to fish and pork, too. Adi meals are traditionally served on banana leaves or sometimes on another special leaf known as ‘phyrnium’. Rice beer usually accompanies main courses. ‘Maa dong’, made with pork and spices, is considered a delicacy. Boiled or steamed rice is a staple.

The Nyishi tribe is also a very prominent tribal group that can be found in many regions in Arunachal Pradesh. Most Nyishi tribals consume boiled food and are meat eaters. Rice is usually eaten with both vegetable and meat dishes. Nyishi tribals tend to use spices comparatively less than other tribes. On special occasions, meals are served along with local rice beer, which is also known as ‘jaapong’ in the regional language.

There is an unmatched variety in the cuisine of the tribes of Arunachal Pradesh. The different dishes that are part of their food habits are telling not only of the local culture, but also the culinary diversity of the region.

On A Culinary Trip To The North-East: 5 Foods You Must Try On Your Trip To Arunachal Pradesh

A Beginner’s Guide To The Cuisine Of Arunachal Pradesh: 8 Dishes To Try

Tawang: 5 Cafés You Must Visit In Arunachal’s Mesmerising Monpa Town