The Bitter Taste Of History: The Evolution Of Bitters In Mixology

That said, the earliest mentions of the word in advertising were in the late 17th century, in a series of ads published by Santa Teresa, the company that is now renowned for the rum-based Cantinero Coffee Bitters. Bitters are a staple in the world of mixology, adding depth and complexity to several classic cocktails. That said, the history and use of these potent tinctures can be unclear to many. In this article, we will take a deep dive into the world of bitters, tracing their origins as a medicinal remedy to their current role in the cocktail scene.

Read More: Explained: What Bitters Are And How To Use Them

The first bitters were made in ancient Egypt by steeping herbs and other botanicals in wine as part of traditional medicine. Several European countries would follow a similar practice, using white wine or clear spirits to preserve or concentrate the flavor of foraged botanicals and consuming the rudimentary beverage as a part of celebrations or as an accompaniment to a meal. It wasn't long before other countries caught on to the practice, with a range of similar beverages made by steeping or distilling botanicals; it is unclear as to when the term "bitters" was used to formally describe these concoctions. That said, the earliest mentions of the word in advertising were in the late 17th century, in a series of ads published by Santa Teresa, the company that is now renowned for the rum-based Cantinero Coffee Bitters.

The use of bitters as a flavorant for alcoholic beverages can be traced back to medieval England, where it was common for monasteries to produce wine that was fortified with bitters. This category of beverages, called "tonic wine," is still popular to this day. It wasn't long until the British began to realize the mixological potential of concentrated botanicals, which led to several bitters houses opening up all over the world to cater to the growing demand. Englishmen would take these tinctures with them frequently on their travels to the USA. American bartenders would embrace the botanical mixer with similar zest, ushering in a new wave of craft cocktails that would continue to evolve over the next few centuries. 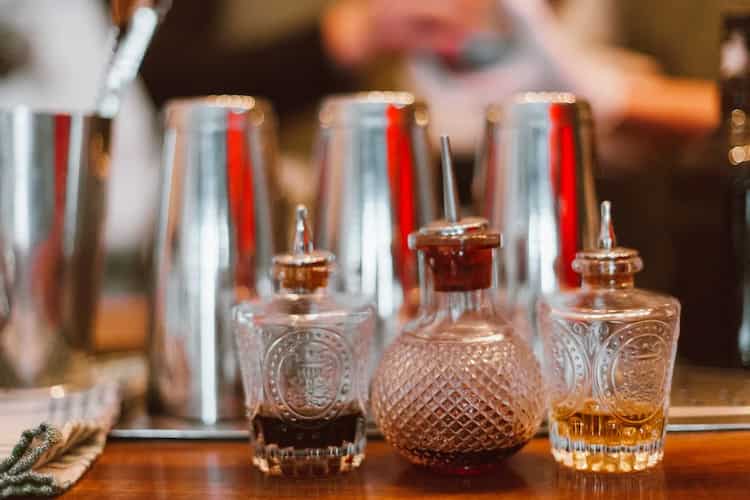 Some bitters would prove to be more popular than others, and none more so than the infamous Angostura bitters from the House of Angostura in Trinidad. The bitters were first distilled by German surgeon Johann Gottlieb Benjamin Siegert during his tenure in the Venezuelan army as a cure for sea sickness. The bitter would go on to be extremely popular amongst sailors, who used it as a mixer to increase the palatability of cheap rum. Seigert’s sons would capitalize on this phenomenon by aggressively marketing the tincture to several bars in the Americas and beyond as a zesty mixture that could enhance just about any spirit. The company now produces several takes on the original recipe, including the ever-popular Angostura Orange, which is the best-selling bitter in the world to date.

Bitters are now mainstays at just about every bar in the world. Just a few dashes of the right bitter can completely change the flavor profile of a drink in a manner that would not be possible with the use of botanicals alone. This has led to the tinctures being the cornerstone of several classic cocktails that are indispensable to the F&B industry today.

The best example of a drink that benefits from the use of bitters is the old-fashioned. The use of Angostura bitters in the drink elevates the spicy notes of the rye spirit base in a subtle yet pronounced manner, making for a distinct flavor profile that is unique to the combination. Other classic drinks that use bitters include the martini (with orange bitters), the Sawyer (with Angostura, Peychaud’s, and orange bitters), and the Trinidad sour (with Angostura bitters). Bitters can be a potent addition to your home bar. There is no end to the sheer range of flavors available on the market today, with natural distillates that feature all manner of botanicals and food items, such as chocolate, coffee, almond, and rhubarb. A number of craft distillers also produce more obscure flavors such as everything bagel, bacon, and even Mexican mole. The possibilities are truly endless; we can guarantee you that you will find a bottle (or two) of bitters that pairs wonderfully with your favorite poison.

It is undeniable that bitters have come a long way from their origins as a medicinal tonic. Today, bitters are an essential ingredient in the world of mixology, adding nuance and complexity to a range of both classic and contemporary cocktails. From the classic Angostura to obscure craft bitters, these magical tinctures can make your favorite cocktails even better, giving them a unique twist that is sure to delight. So next time you're mixing a drink, don't be afraid to shake things up with a dash of bitters and take your cocktail game to the next level!

The Evolution Of Food Science

How The Famed Korean Fried Chicken Evolved Over Time

Then And Now: A Quick Peek At How Pizza Evolved

The Evolution Of The Jewish Dish Kugel