Telebhaja makes for an essential part of Bengali cuisine. Come evening and you get the aroma of fried besan from most Bengali homes in Kolkata. Telebhaja which literally translates to fried in oil or fritters happen to be one most famous Bengali snack. They literally don’t wait for rains to enjoy chai pakoda but it’s an all-season deliciousness. This irresistible gastronomical delight is best enjoyed with some muri or puffed rice.

Telebhaja makes for an essential part of Bengali cuisine. It’s known fact that Bengali’s love their deep-fried dishes be it frying the eggplants, parwal, aloo, vegetable flowers or so on or even their fish, prawns and more. In the batter of gramflour (besan) right from eggplant slices to onions, to aloo, to prawns to cauliflower everything is dipped and deep fired. These crispy fried delights served mostly in roadside shops in evenings are seen served in newspaper packets sprinkled with some black salt and chilli. Telebhaja is a complete dish in itself. 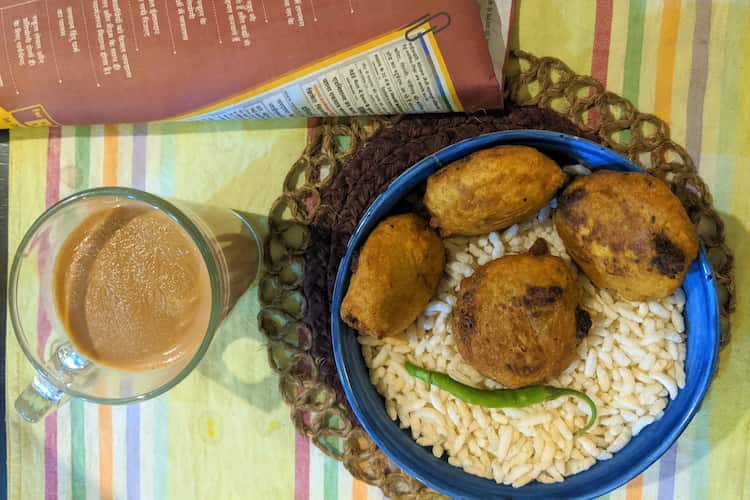 Pragyasundari Devi’s, an Indian cookbook author in her book also has a dedicated section called ‘Bhajibhuji’ (fried this that) in which she mentioned some of the much lesser known veggies like green papaya and jackfruit which is also fried. Being a part of the cuisine these ‘Bhajibhuji’ not just go with muri but also with bhaat daal and khichudi. As you walk the bylanes of the old city in Kolkata you will notice many sweets shops boards saying “daal puris and telebhaja” which shows what they sell and such hole in a wall shops are much common to the city.

The telebhaja dokan that has historic past So much so that these humble telebhaja has also played role during India’s Independence. Commonly known as the Netaji-r Telebhaja-r Dokan, (Netaji's Telebhaja Shop) Netaji here referring to Subhash Chandra Bose this 103-year-old shop boast of being the hideout where Bose and others would meet to hold meetings and Shaw the then owner of the shop would often supply telebhaja, muri and fried green chilli. Mohan Kumar Gupta, a third generation owner says that till date they give free telebhaja on Bose’s birthday. The shop starts selling fritters from 8am each day and serves alur chop, phuluri, peyaji and phulkopir chop and more.

Don’t miss the fact that bhaja is much different from telebhaja, while bhaja refers to simple frying in oil, telebhaja means coasting each veggie in gram flour batter and then deep frying them.

Jackfruit Fritters Recipe: A Vegan Treat You Must Try Once