Sunny Deol has given us new vacation goals. 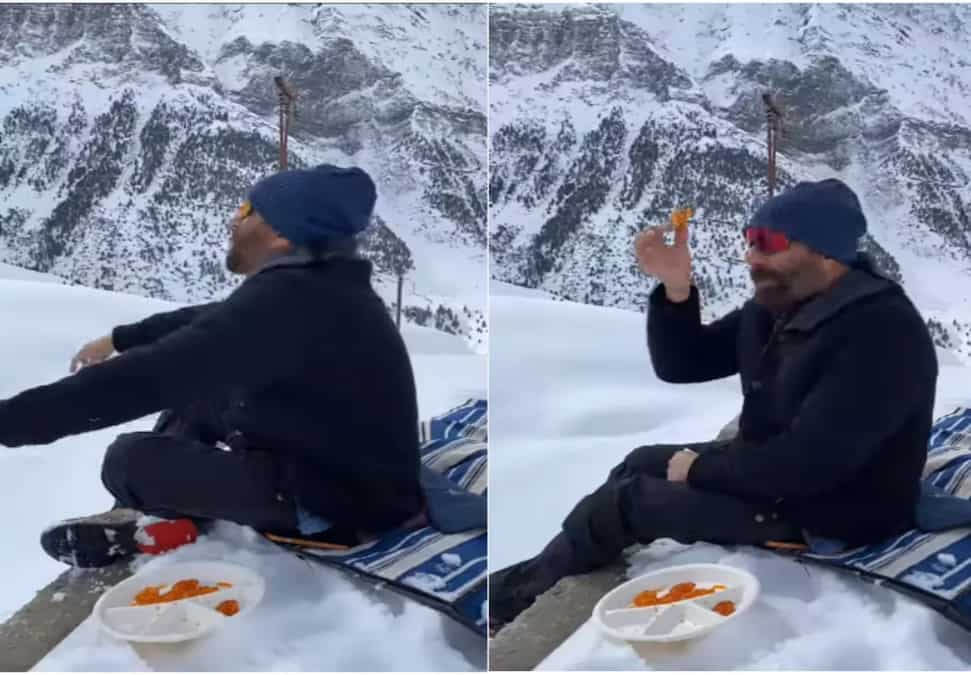 You do not need to be a hard-core Bollywood fan to tell that actor Sunny Deol is best known for his action roles. Having starred in multiple blockbusters such as ‘Border’, ‘Ghayal’, ‘Gadar’, Sunny Deol established himself as the ‘Angry Young Man’ of Bollywood long back, which is why it was quite a delightful surprise to watch him in a Zen mode in a throwback video he posted on Instagram on Wednesday. In the video. Sunny is in a stunning location which is covered in snow, where he seems to have found a place to sit in a ‘meditative position’. Sunny, clad in his warmest wintergear, is also not alone. Accompanying him in his meditation is a plate of hot jalebis.” Look Bhaiya is doing meditation,”, we hear a voice in the background. “With Jalebi”, responds Sunny. “Jalebi Meditation”, says the person who is recording the video. Sunny agrees and says, “it’s so sweet”.

Doesn’t a plate of hot, thin and crispy jalebi sound like a dream in such snow-capped mountains? For the uninitiated, Jalebi is a sweet snack that resembles a coil. It is made with a smooth gram flour batter that is filled in a piping bag, the batter is then doled out in hot oil and shaped as a ‘jalebi’, and fried until crisp. These crispy treats are further soaked in sugar syrup or chashni that is infused with saffron or kesar, which lends a lovely orange hue to the Jalebis. Jalebis are incredibly popular in India, and can be easily found across most busy streets here. Interestingly, a snack so ubiquitous to Indian streets is actually not native to India. It is said to be an Indian off-shoot of the Persian snack ‘Zalabiya’.

It came to India somewhere in the medieval ages, and became an instant favourite. Now, it is difficult to imagine a ‘desi feast’ without the helping of jalebis in the end. Jalebis can be thin and crispy, or thick and spongy, depending upon the method of preparation. For instance, Paneer Jalebi, which also has crumbled cottage cheese in the batter are almost always thicker in comparison to the standard jalebis and are also considered a premium variety of jalebis by the Halwais.

While Jalebis are pretty wholesome on their own and do not require any accompaniment, they are however paired with a variety of things that help elevate the flavour of the dessert. One of the most beloved Jalebi pairings is that with Rabri. Rabri is essentially thickened condensed milk flavoured with cardamoms and nuts. It is also not a bad idea to pair your jalebis with vanilla ice cream. In Indore, people also pair Jalebis with breakfast dish Poha. Poha are lightly tossed rice flakes, that are flavoured with mustard or cumin seeds, some chopped onions and potatoes. The sweet and savoury combination does taste lovely early in the morning.

So how do you like your jalebis, do let us know? Also, here is an easy-peasy jalebi recipe for you try it soon.