The contents of the spice box differ not just from one region to the next, but also from one family to the next. Some essential spices, however, are found in all masala dabbas. Our grandmothers and mothers have always kept the spice box, also known as masala dabba, close to their hearts. Spices are used extensively in Indian cuisine. They have the ability to transform any dish into a delectable meal and bring even the most basic ingredients to life. Six or seven vital spices are kept in a circular spice box, which may be found in many Indian homes. Some spices are whole, like cumin and mustard seeds, while others are powdered, like red chili and turmeric, and one spice blend, the famous garam masala. The contents of the spice box differ not just from one region to the next, but also from one family to the next. Some essential spices, however, are found in all masala dabbas.

Coriander is a spice that is made from coriander seeds and is one of the most important spices. This versatile spice has a citrus flavor and lends earthy overtones to curries and Indian cuisine in particular. For several popular spice blends, entire seeds are slightly roasted before being crushed with other spices. Ground coriander is popular because it gives the food texture and can be savored with every bite. For perfect earthiness, coriander is frequently combined with cumin.

Cumin seed is a mainstay of Indian cookery and curries, having a flavor profile similar to caraway(ajwain) or dill (savva). Cumin seeds are often best used whole, cooked in oil at the start of a recipe, the process called tempering or tadka. Cumin seeds brown quickly at higher temperatures, in 15 seconds or less. Make sure they don't burn, and you'll know they're done when they begin to pop. Ground cumin powder is an important spice in India, and it's one of the main constituents of the garam masala spice blend. 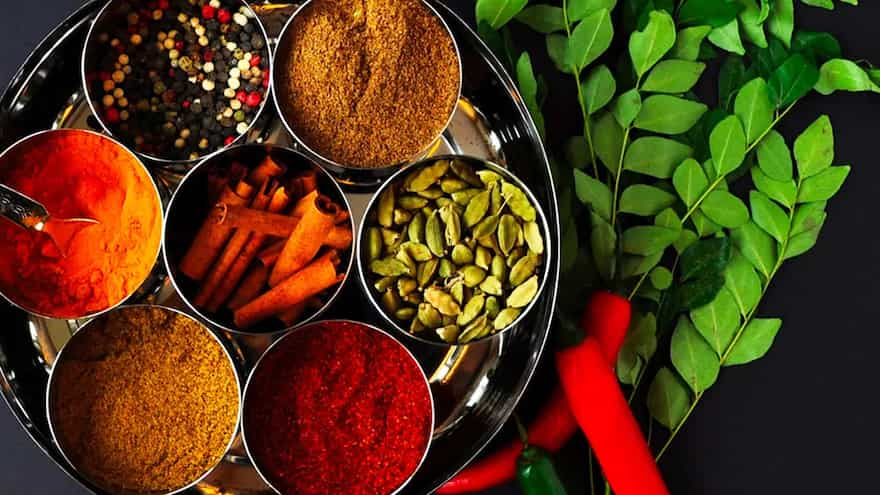 Turmeric is essential in Indian cuisine. Turmeric is a ground spice with a nutty undertone. This spice provides the most health advantages of any spice used in Indian cookery, as well as a stunning yellow color. To flavor and color a dish for a family of four, only a teaspoon is usually used. If you're using black pepper in your dishes for health reasons, make sure to use at least a dash. Turmeric is a powerful anti-inflammatory, but its effectiveness is lessened without the piperine found in black pepper.

Although several other types of dry red chilies are used in Indian cuisine, Kashmiri red chili is the most common. Which has a bright red color and a smokey flavor from natural food coloring. When using other chiles in place of Kashmiri red chilies, keep the heat level in mind. When it comes to controlling the heat in your dish, this is a great ingredient to add slowly at the end.

One of the favorite Indian spices is asafetida (hing). Cooking with hing means cooking with one of the world's most potent aromatic spices. To use hing, make sure your oil or ghee is heated before adding it to your frying pan. Before adding onions, garlic, or ginger, let it sear for a few seconds. Expect to use between 1/4 and 1/2 teaspoons of hing for any dish. Make sure it's kept in a well-sealed container.

Spices for summer: What to eat and what not?

Cinnamon: Benefits And Uses Of The Healing Spice

Do You Know How Spices Are Beneficial For Your Health? Find Out Here