Contrary to soy milk, breast milk and infant formula provide all the necessary nourishment for infants For some adults, particularly those who have lactose sensitivity, plant-based milks are an excellent alternative to conventional cow's milk. But may infants and young children benefit from non-dairy milks like soy milk as well? What you should know about soy milk for infants is provided here.

Soy milk is created by cooking soybeans, and it includes fibre, natural or added sugars, and soy protein. A 4-ounce glass of soy milk has roughly 40 calories, 3 to 4 gram of protein, 2 gram of fat, and a half-gram of sugar, however, the nutritional value can vary from brand to brand. Minerals including calcium, iron, and potassium are also present. 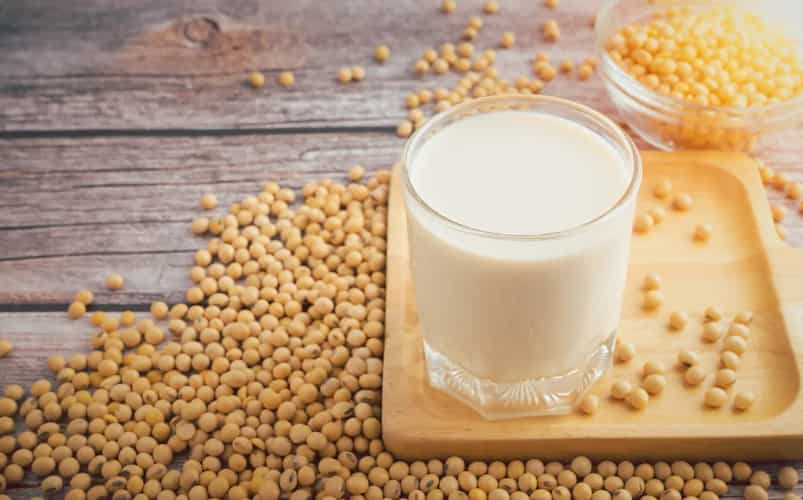 Cow's milk, soy milk, and any other plant-based milks shouldn't be consumed by infants younger than 1; only breast milk or formula should be given to them instead (with a little water after they start solids). The majority of plant-based milks are insufficient sources of the many nutrients that newborns require in the early stages of life, while cow's milk contains too many proteins and minerals for babies' stomachs to handle. Doctors advise kids to drink mostly water and cow's milk between the ages of 1 and 5. But because fortified soy milk is nutritionally equivalent to cow's milk, it can be used in place of the latter. Therefore, if your child does consume soy milk before the age of five and after the age of one, make sure it is unsweetened and fortified. Two to three cups of whole milk per day are recommended for children aged one to two. Fortified soy milk is a suitable replacement for cow's milk if your child has a medical condition, such as a dairy allergy or lactose intolerance, or if your family doesn't consume animal products.

Babies under one year old shouldn't drink soy milk. Contrary to soy milk, breast milk and infant formula provide all the necessary nourishment for infants. Your child should continue drinking whole, unsweetened cow's milk after the age of 1, but if your family is vegan, your child has a milk sensitivity, or your child has another underlying medical condition, supplemented, unsweetened soy milk is a suitable substitute.

Choose the best type of soy milk for your child in consultation with your paediatrician. Make sure the soy milk you choose is one your doctor has approved because soy milk's nutritional value might vary by brand and our bodies might not be able to absorb nutrients from plant-based milks as effectively as they can from dairy milks. Only breast milk or baby formula should be given to infants under the age of six months, and even once you start introducing solid foods into their diet, they should only have a few sips of water in between meals rather than cow's milk or soy milk.

Back To School: Yummy And Healthy Breakfast Ideas For Your Toddler

Add Organic Foods To Your Toddlers Diet, Know Why