Soups, salads, sandwiches—rajma recipes for all

A box of cooked beans in the fridge can go into a variety of dishes, making the meal healthier and heartier I haven’t bought rajma (red kidney beans) in six months. In November, I had ordered 5kg of different kinds of rajma from the Tons Valley Shop in Uttarakhand, direct from the farmers. Even after sharing with friends, I still have a sizable quantity left. I have realized that organically grown, freshly harvested rajma is in a league of its own.

My standard pick has always been small, dark-red Jammu rajma since it is an easy cook. Thanks to the 5kg haul from Tons, I have been cooking with different varieties. The white rajma (long white Harshil) cooks quickly and is preferred by the locals in Uttarakhand. It is cooked along with some of the red beans to get a richer colour. The long red Chitra variety, with a beautiful, speckled appearance, is the perfect balance of colour and flavour.

The mixed bag is a medley of white, red and speckled beans and everything in between. It comes from farmers sowing a mixed bag of seeds in their fields. Selling them as is helps them get quick returns as they don’t have to invest in time and manpower to sort the beans. I love the mixed pack as it offers a unique flavour and texture and also looks beautiful in salads.

The farmers in Tons grow any variety depending on the seeds they have handy. They do prefer the small red variety because of higher yields.

We often assume that beans have an indefinitely long shelf life. While grains like rice age nicely, turning out fluffier when cooked, this is not the case with beans. Anand Sankar, founder of the Tons Valley Shop, explains that beans lose moisture with time and become harder, needing longer soaking and cooking time. Helping agents like baking soda are sometimes needed to cook older beans to break down the tough skins. Fresh beans have a lot more moisture content, so they need less soaking time and are easier to cook. Sankar adds,“In the cooler climes of hilly regions like the Tons Valley, beans can be stored for one-two years and still taste good because of lesser moisture loss.”

When it comes to rajma, it is imperative to address the issue of flatulence. Kidney beans have quite a few problem substances. Saponins, the soapy residue you see when the beans are soaked and cooked, prevent digestion of protein and cause gassiness. Phytic acid, found abundantly in legumes like kidney beans, binds with essential vitamins and minerals and prevents their absorption. Rajma comes with the additional stubbornness of oligosaccharide, a variety of indigestible starch. Humans do not produce the enzyme required to break this down. It is the gut bacteria in the large intestine that feed on these undigested starches and break them down to release carbon dioxide and methane.

However, there are enough ways to reduce post-rajma-binge bloating and gassiness. Soak the beans for a good length of time, 12-14 hours, in warm water with a pinch of baking soda (alkaline medium), changing the water once in the middle. When cooking, discard the soaked water and use fresh water. Pressure-cook well until soft. The time depends on the size of the bean but generally 15 minutes under pressure (keeping the flame on low after full pressure attained/one whistle has released) is good. Discard the cooking water and rinse beans to get rid of more of the oligosaccharides. Using spices like asafoetida, ajwain (carom seeds), cumin and ginger while cooking can help too. When eating rajma, pair it with a light grain like rice, not dairy, meat, fish or other lentils, which add to the bloating.

Rajma is one of my favourite ingredients to meal prep. A box of cooked rajma in the fridge can go into soups, salads, wraps and sandwiches, making the meal healthier and heartier. Cook a batch this weekend and try these two easy recipes in the coming week.

Half cup vegetable stock (or water)

A handful of chopped coriander

Heat the oil in a pan. Sauté the garlic over a medium flame for a few seconds. Add the rajma and all the other ingredients except the stock and coriander.

Combine everything by continuously mashing with a wooden spoon or a potato masher. Thin it down by using the required quantity of stock or water. Mash and combine till you get a coarse puree. Garnish with fresh coriander.

To make loaded nachos, spread nacho chips on a platter. Top with spoonfuls of refried beans, cheesy sauce (melt half cup grated cheese in quarter cup milk in a small pan, season with herbs and spices as per your liking), tomato salsa and sliced jalapeños. 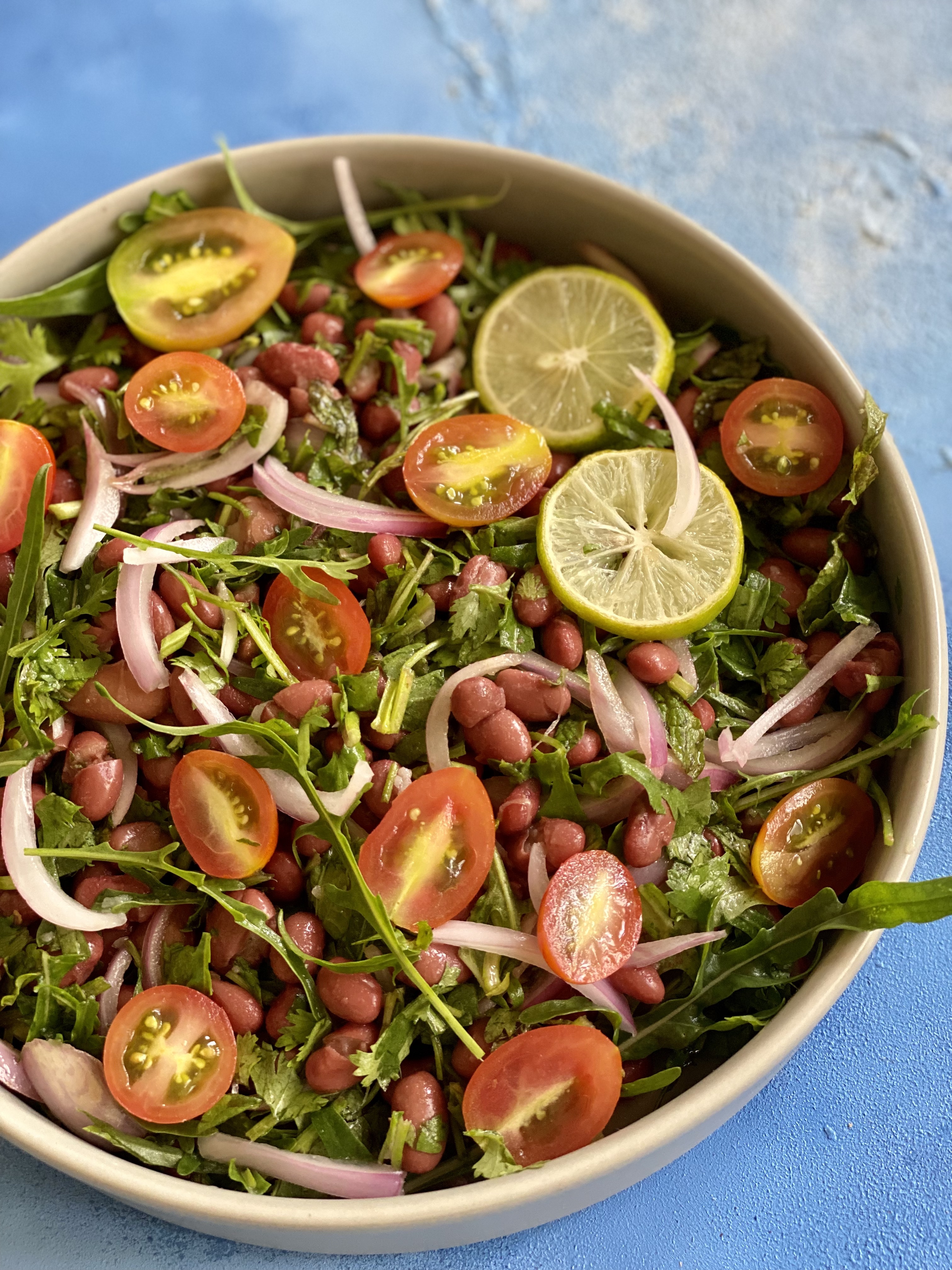 Quarter cup chopped arugula (or any other greens)

Soak the sliced onions in vinegar and a pinch of salt for 30 minutes. Squeeze onions well and keep aside. In a large bowl, combine all the ingredients with the onions. Keep aside for 30 minutes for the beans to soak up all the flavours. Serve at room temperature or chilled.

*For salads, take care not to cook rajma to a mushy consistency.