Shrikhand is a traditional sweet of the Indian subcontinent made from hung curd or yogurt. Shrikhand is often relished with pooris (deep-fried puffed bread) or served along with the main course which includes multiple vegetables, pickles, dal and pooris rice and chapatis. Maharashtrian cuisine often includes Shrikhand as a dessert. Shrikhand is cardamom-flavored yogurt topped with dry fruits.

Both Gujaratis and Maharashtrians claim the invention of Shrikhand but according to a popular legend, the delicious and utterly sinful Shrikhand was invented by nomads. They strained out its whey to carry the yogurt more easily while traveling overnight but it turned sour by morning, so they mixed it with sugar and nuts to make it more palatable. Thus, Shrikhand was born.

Food historian KT Acharya’s book Indian Food: A Historical Companion states that Shrikhand was first noted in 500 BC. He states: ‘To de-water curd, it was hung in a muslin bag for a few hours; sugar and spices added to the mass yielded Shikharini (identical with modern-day Shrikhand).” Kannada poet Chavundaraya II shares a method for preparing Shrikhand in his book, the ‘Lokopakaraya’. Mangarasa III, a Jain emperor who is credited with penning the ‘Soopa Shastra’ - a cookbook, mentions Shrikhand as well.

To prepare Shrikhand, yogurt is poured onto a cheesecloth which is then hung overnight to drain its whey. The strained curd is put into a bowl. Sugar, green cardamom powder and saffron are then added to it and the mixture is whisked thoroughly to blend the flavors to impart a smooth, creamy texture. It is covered, chilled for the next few hours and served. The shrikhand is garnished with almonds, cashews and pistachios before serving. 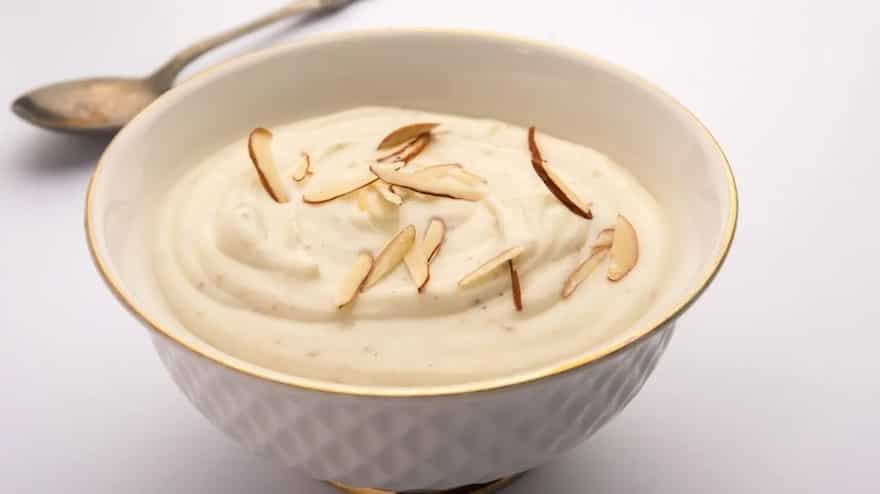 While there have been mentions of this dish in historical literature, the etymology of its name Shrikhand is said to have come from the Sanskrit word, ‘Ksheera’ for condensed milk and ‘qand’ which is the Parsi word for sweet. It is a simple sweetened dessert with saffron, dried fruits and nuts.

Shrikhand- The Iconic Yogurt Based Dessert From Maharashtra