Sharbat originated in Persia and was introduced to India by the Mughals. Made by combining fruit juices or extracts from flowers or herbs with sugar and water, sharbat is often called the world’s first soft drink. It is a Persian word, which means a sugar and water drink and came from the Arabic word ‘shariba’, meaning “to drink”. The oldest mention of sharbat can be found in Zakhireye Khwarazmshahi, a Persian medical encyclopaedia from the 12th century.

The Arabic word ‘sharab’ was used to refer to alcoholic beverages and ‘sharbat’ or ‘sherbet’ became associated with sweet non-alcoholic drinks by the late Middle Ages. In Central and South Asia, girls are even named “Sharbat”; Afghanistan’s Sharbat Gula was on the cover of National Geographic magazine in 1985. However, sharbat’s main meaning is “syrup” or, as mentioned in the Oxford English Dictionary, “a cooling drink (of the East)”.

Sharbat originated in Persia and was introduced to India by the Mughals. It remains most popular in Muslim cultures. The main reason for this is Islam prohibits drinking alcohol. Also, until the early 20th century, it was not known how to preserve or transport fresh fruit. Refrigerators were a luxury enjoyed only by the rich, and fruits remained seasonal unless they were dried to distilled into syrup. And so, sharbat became a way to enjoy seasonal fruits long after their expiration dates. 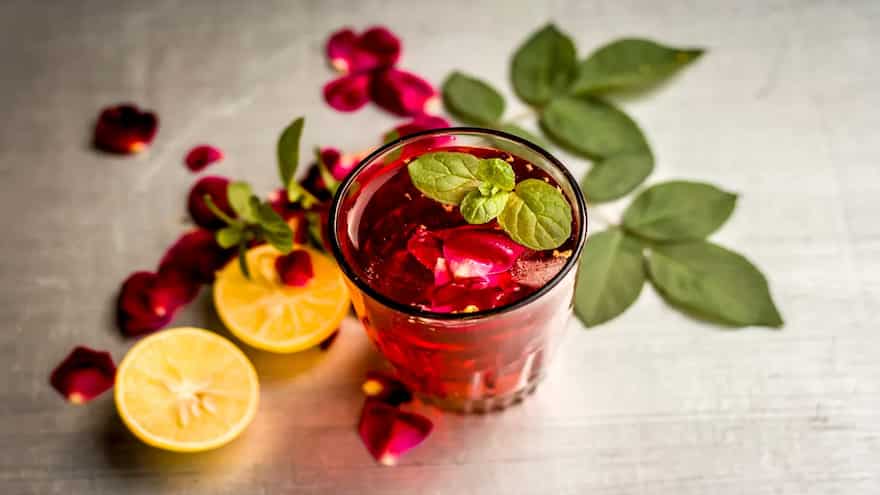 The drink also has associations with Turkey. The Ottomans drank ‘sherbet’ before and with meals. Even today, the Haci Abdullah restaurant in Istanbul serves sherbet with traditional Ottoman cuisine. Karisik komposto is an example of Turkish sherbet: a thick, rose-colored syrup made from apple, quince, peach, pear and apricot, which is mixed cold water.

India loves its sharbat just as much. From Rooh Afza to khus, different types of jewel-toned sharbat are available in markets across the country. Besides syrups that can be bought, it’s also a common Indian custom to make sharbat at home. Bel sharbat is one such drink that can be made at home and has numerous health benefits.

It has been a popular Indian custom to offer chilled sharbat instead of fizzy drinks to guests during the summer. This custom recently gained traction abroad: 2021 saw Rooh Afza become a trend, with people from both India and the diaspora posting photos of their sharbat bottles and glasses on social media and food writers writing articles about its importance. Even if it may be just one brand like Rooh Afza that has reached corners of the world, sharbat is slowly becoming a way for Indians abroad to remain in touch with their culture.

Old Delhi’s Mohabbat Ka Sharbat Is An Ode To The Summers, Love And More