Shahid Kapoor Goes ‘Bananas’; His Hilarious Dance Is Leaving Us In Splits

While we know how much Shahid Kapoor loves to dance, his banana moves have tickled our funny bone. Some banana recipes inside too. Currently travelling to promote his latest film, Jersey, Shahid Kapoor seems to be having a lot of fun. We remember how he gave a hilarious spin to the coffee trend that was doing the rounds a while back. Paired opposite Mrunal Thakur in the new film, Jersey is a fictional story of the struggles of a failed cricketer who bounces back into the field after a lot of years. The inspirational movie is definitely the talk of the town right now but Shahid Kapoor seems to draw attention towards himself due to his charming aura.

This time, we spotted the Udta Punjab actor dancing to the tunes of a made-up song called Bananas. His co-actor, Mrunal Thakur captured him in action and took to her Instagram stories to share it with us. While we are glad that she did so, it was Shahid Kapoor who reposted the story later. Seems like the actor wanted to give us a sneak-peek into fun side. In the video, Shahid Kapoor is seen holding a banana and eating it. While he does so, he also hums a random tune and then turns it into a banana song which goes, “Ban-na-na, Ba-na-na, Ba-na-na”. There’s a cute minion emoji with the video which actually makes us go aww.

Don’t know what we are talking about? Here’s a glimpse of the dance. 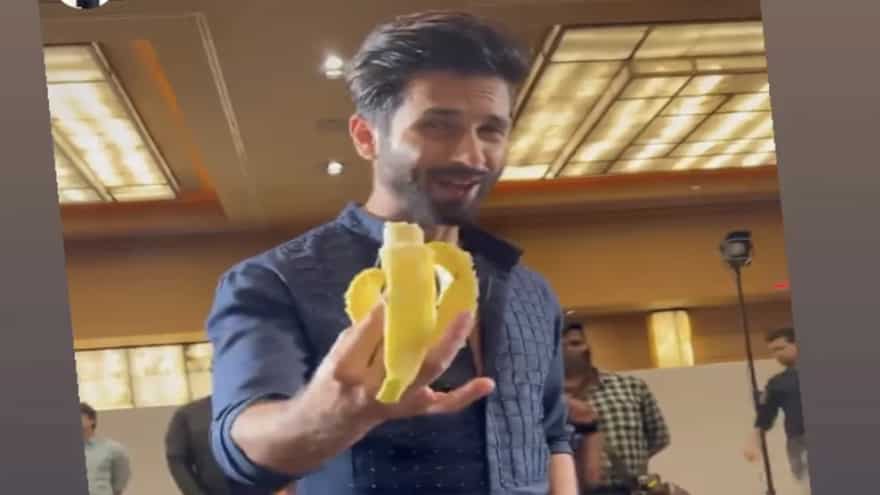 Shahid Kapoor’s banana dance and groovy steps have made us rethink our ways to eat bananas so here are a few recipes that we’d like you to try.

Why have bananas straight out of the peel when you can do something creative? Take some ripe bananas and slice them. Top them with brown sugar, granola and cinnamon. Sprinkle some roasted nuts on it and air-fry them. The crispy, crunchy and sweet flavours will explode in your mouth.

Made with the goodness of almond flour, these muffins are low on calories and carbs. The ripe bananas are mashed to be dunked into the muffin batter. These gluten-free muffins can be an excellent breakfast option.

Do you like banana bread? This one takes the classic recipe a notch higher with the addition of dates. The soft and mushy bread is flavoured with bananas and sweetened with dates.