Shahi Sheermal: Ghee-Dipped And Embellished With Nuts, This Version of Sheermal Screams Royalty

For the uninitiated, ‘Shahi’ refers to ‘Royal’ in Urdu, and the contents of the Sheermal would tell you why this is the perfect prefix. 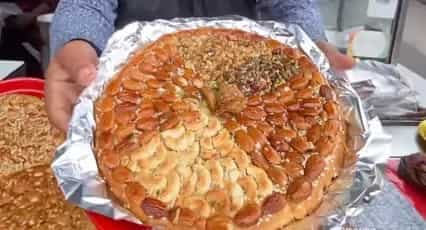 After being scarred by the likes of Masala Dosa ice cream and Fanta Maggi, it is always nice to bump into something pleasant, that serves as a reminder as to why we would never give up on Indian street food come what may. Sheermal is a leavened flatbread that has Persian roots, but during Mughal rule, the bread found a strong foothold in India as well. It is round, soft, slightly sweet, and thick. The word sheermal is an amalgamation of Persian words ‘shir’ meaning milk and ‘mal’ which means rubbed. This soft and delicate ‘milk-rubbed' bread is paired with Nihari, Mutton korma, and all rich and robust Mughlai gravies.

Sheermal ruled in terms of popularity during much of Mughal rule and even after. That’s right, when the Mughal Empire declined, the Mughlai cook came to the streets and started their own eateries, restoring much of the cuisine through their daily preparations. The standard preparation of sheermal requires kneading the maida with yeast and baking it in Tandoor, but things are taken up a notch for the ‘Shahi Sheermal’.

For the uninitiated, ‘Shahi’ refers to ‘Royal’ in Urdu, and the contents of the Sheermal would tell you why this is the perfect prefix there could be.

To make this Shahi Sheermal, the dough is rolled out flat and pricked gently in places, doing so ensures that the sheermal is cooked evenly even from within. After this, the sheermal is brushed with water, so that the nuts and dry fruits stick well. Then starts the decoration of sheermal. First, the periphery is lined with sliced almonds and cashews, and then the insides are filled with more almonds, cashews, walnuts, and apricot. The placement is carried out very neatly so that you can see all the dry fruits used in their specific regions. Some poppy seeds are then sprinkled on top and the sheermal is further rolled out using a belan, so that the nuts are further sealed onto the bread. The sheermal is then placed in the Tandoor to cook and finally dipped in ghee.

The heavy and ornate bread is also often carried as souvenirs, and made on special orders.

Do you think you can make this at some? Do share pictures.

Dia Mirza’s Chai Platter Is All About Indulgence