Risotto And Khichdi: What’s The Difference?

Aren’t we all fascinated by how identical these dishes appear to be? Even though one dish hails from South Asia and the other from the European country of Italy, many people comment on how similar the two dishes appear.  We've come to put an end to this debate for good. Let's start with a brief introduction to khichdi. Khichdi is a centuries-old Indian and South Asian dish that is still relished in every home. Even during the reign of the Mughals, it was cooked and eaten. In their writings and diaries throughout the 1350s, many travelers reported khichdi and its amazing taste. So it's safe to conclude that khichdi is a centuries-old delicacy that's still popular in our homes and tastes fantastic. It has a porridge-like texture and is quite soft. Khichdi is a comfort dish made with rice, moong, or lentils that have been cooked in water. People also add various veggies to it to make it taste more wholesome and delicious.

Almost every state in India have their own variation of khichdi (apart from plain khichdi) like, Pongal from Tamil Nadu, Keema Khichdi From Andhra Pradesh, Vaghareli Khichdi From Gujarat, Bisi Bele Bath From Karnataka, Mong Khetchir From Kashmir, Valachi Khichdi From Maharashtra 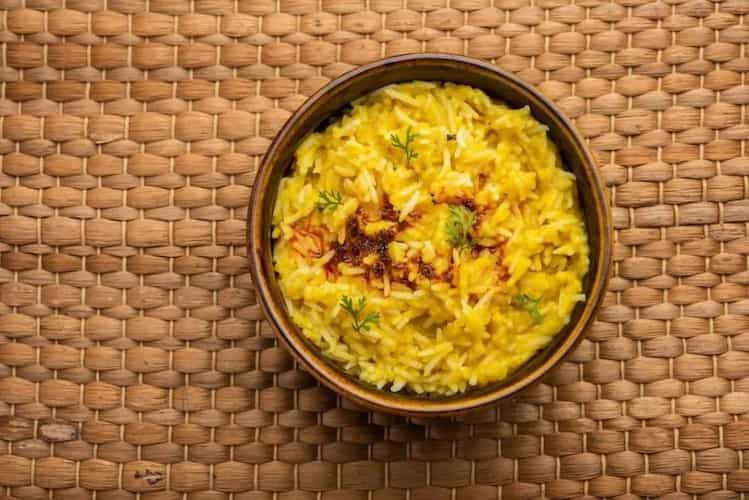 Risotto is a north Italian dish in which rice is cooked until it's creamy in a chicken or any meat broth. Because it's an Italian meal, it's likely to include wine, onions, and butter.

The first risotto recipe was created in 1809, and it has since become a popular main course not only in Italy but also in many other nations. Though its preparation may appear simple to our ears, it usually takes a great deal of attention in order to achieve the desired consistency and texture.

Some examples of risottos: Now let's come to the differences:

While khichdi and risotto have similar textures and consistency, they are opposed in terms of taste, flavour, and even cultural background.

•    Khichdi has a wet-to-solid texture (porridge-like texture), whereas risotto has a creamy texture.

•    Khichdi is made with regular basmati rice and lentils such as moong or toor, whereas risotto is made with arborio rice.

•    In khichdi, vegetables are cooked together with the khichdi, whereas in risotto, cooked veggies are added separately.

•    Risotto is typically made with wine, butter, and cheese.

•    The flavours are also rather distinct.

Despite their many differences, both of these recipes are delicious and should be tried if you haven't already.  Both khichdi and risottos are available in many variations in almost every restaurant.

When, Where and How Of The Classic Italian Risotto

How To Make Risotto; 5 Tips To Ace This Delicious Italian Dish

This Chana Dal Khichdi Recipe Is Comfort Served In A Bowl

The ultimate Sunday meal is a bowl of dried prawn khichidi