These restaurants in Lucknow Serve the best Paya around town. Paya is a traditional Indian subcontinental dish. It's usually served at special family gatherings and events. In Urdu, paya means 'legs.' The dish's major ingredients are trotters (or the hoof of a cow, goat, buffalo, or sheep), which are cooked with a variety of spices. Paya is a dish that combines the flavours of South and Central Asia. Pacha was the name given to it in Central Asia. Muslim cooks in Lahore, Hyderabad, Telangana State, and Lucknow modified the dish to their respective cuisines. Paya, which originated in Armenia as Khash or bone soup, made its way to the Middle East in the early Middle Ages as a treat for tired souls in guesthouses and royal homes who could afford to make this laborious delicacy that required hours of toiling over a shorba and then deftly seasoning it to suit the palate. The Ottoman soldiers, particularly the Janissaries, were believed to enjoy this soup because of the amount of energy and power it offered. The soup, on the other hand, was more of an antidote or aphrodisiac for the royalty, as it could take subtle herbs and spices like Saffron well. In one of her memoirs, Princess Gulbadan (Babur's sister) mentions it as a soup that was not only popular among the army as a treat but was also frequently used in the harem to heal a range of diseases. This nutritious and flavorful soup eventually became the foundation of the rich Siri Paya in Rajasthan, as well as the base for the aromatic Paya Nihari at Emperor Shah Jahan's court. 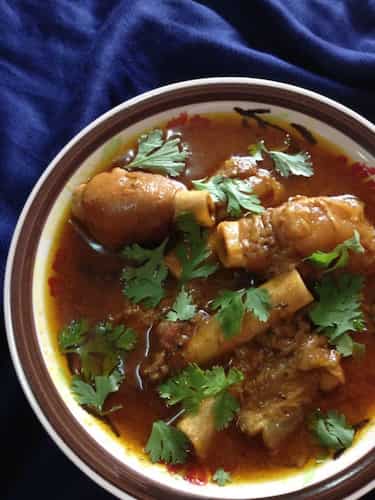 Craving some delicious mouth-watering Payai? Here are the restaurants that serve the authentic Paya dishes in Lucknow-

New Mubeen is a casual dining restaurant that serves Mughlai cuisine and caters to hunger cravings until 12:00 a.m. It is a nice joint to visit when one is looking to satiate hunger pangs with tasty, hygienic food at nominal prices. It is a great place in Chowk and is praised for its stylish presentation. The mutton paya nihari served here has authentic spices and is juicy enough to make you crave it every day.

Raheem Hotel is your best bet if you want to eat in a restaurant where you will never forget the dining experience. The aroma of pure Lucknavi cuisine will greet you as soon as you enter through the door. Sheermals, Nihari, and Kebabs are some of the restaurant's signature dishes. Their paya is lip-smackingly delicious. You can feel all the spices infused in the meat with every bite.

This restaurant in Lucknow is known for its biryanis. Their one of the best selling delicacies is the paya biryani. The biryani is a combination of all the authentic spices and flavours. Paya added to the biryani is like a cherry on the cake. The meat is soft and juicy. If you visit Lucknow, this dish is worth trying.

Kareem's is a casual dining restaurant serving Mughlai preparations. A highly-rated place in Gomti Nagar, it is praised for its timely service and is a nice joint to visit when one is looking to satiate hunger pangs with tasty, hygienic food at nominal prices. Their paya soup is a must-have! It is delicious and infused with all the authentic spices. The dish feels royal and is a treat to the taste buds.