Craving some juicy and delicious mutton? Try these restaurants in Delhi that serve the authentic Rogan Josh. 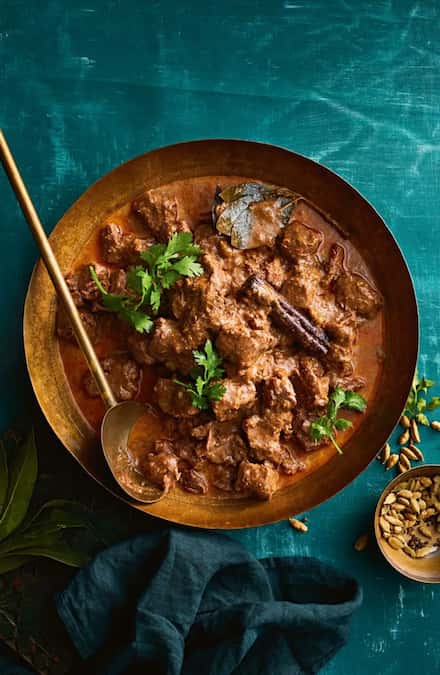 Rogan josh (also called roghan josh or roghan ghosht) is an aromatic Kashmiri curried meat dish. It's made using red meat usually lamb, mutton, or goat cooked with alkanet flower (or root) and Kashmiri chillies to add colour and flavour to it. It is one of Kashmiri cuisine's hallmark dishes. In Persian and Urdu, roughan means "clarified butter" or "oil," whereas ju (alternatively romanized josh) means "stew" which is derived from the verb juidan, which means "to boil." According to this description, rogan josh could mean "ghee stew." Another theory is that the name comes from the Urdu term roghan, which means "red", so the term Roghan josh means red meat. The true origins of this dish are unknown because it is known by two names: "rogan josh" and "rogan ghosht". Everyone has their own recipes for Rogan josh. In some variations, the pieces of lamb or mutton are cooked in a gravy flavoured with garlic, ginger, and aromatic spices (clove, bay leaves, cardamom, and cinnamon), with onions or yoghurt. It gets its rich red colour from dried Alkanna tinctoria (ratan jot) flowers or roots, as well as copious amounts of dried, deseeded Kashmiri chilies (lal Mirch). These chillies, which have a flavour similar to paprika, are much milder than the customary dry cayenne pepper used in Indian cooking. The spice in this recipe is more about aroma than heat. Places like ITC Maurya's Bukhara are innovating and popularising their genuine food as well. Bukhara has been one of India's most well-known restaurants since its inception in 1978, with locations in cities like New York. The decor is antique and rustic, and the food is cooked to perfection. Bukhara is one of the greatest Mughlai restaurants in Delhi. But it also serves some delectable melting-in-your-mouth mutton. Their rogan josh is one of the best mutton delicacies that gives a royal taste to every bite.

Al Jawahar is a popular restaurant in Old Delhi that serves mughlai cuisine. It was named after Pandit Jawahar Lal Nehru, who is credited with inaugurating the place following India's independence. People go long distances to enjoy the most delectable mutton-nihari, which is cooked overnight. The secret masalas and desi ghee add to the food's deep flavour, setting it apart from its competitors. Mutton rogan josh served with rumali roti is one of their delicacies that gives a burst of different Kashmiri flavours and hits the right spot on the taste buds.

This iconic food chain in CP has been consistently satisfying Delhiites' Mughali fantasies with consistent quality, delectable taste, flawless service, and affordable rates, making it one of the city's most popular and greatest eateries. Their mutton curries with desi-ghee will have you licking your fingers. The mutton rogan josh served here is rich in spices and flavours. I am sure you will fall in love with this place the moment you try their rogan josh with butter naan.

Old Delhi's oldest charm Karim has gone on to open innumerable chains in and around Delhi over the course of a century. Karim first opened its doors in 1913 and today feeds over 2000 customers every day. People travel long distances just to taste the tender and juicy kebabs and fiery red mutton curries. Without a doubt, it is one of the oldest and best mutton-serving restaurants in Delhi. Their fiery rogan josh with rumali roti and onions is worth trying.

This south Delhi fame serves one of the best Mughlai cuisines around town. Rajinder da dhabha is famous for its delectable mutton and chicken dishes. Their Rogan josh is cooked well with authentic spices and desi ghee. You will taste all the authentic royal flavours of the Mughlai cuisine in each bite.

How Did Interplay Of Cultures Give Rise To The Rogan Josh Of Present Times?