Rajasthani Khasta Kachori: A Flaky Breakfast Treat You Must Try

While Rajasthan’s Pyaaz Kachori is quite famous, it is the Khasta Kachori that makes for a crunchy breakfast item From time immemorial, crispy and deep-fried delicacies have been a part and parcel of Indian cuisine. Be it the crispy samosas and kachoris from the North or the vadas and murukkus from the South, the fanfare for these crunchy bites is widespread. Some of them are eaten as evening snacks with tea while others easily slide onto the breakfast table menu too. One such dish is the Khasta Kachori. The name of this delicious treat is derived from its crispy and crunchy texture which is referred to as khasta in Hindi. Although this kachori is widely available in several parts of North India like Delhi and Uttar Pradesh today, it is the Rajasthani Khasta Kachori that has a charm of its own.

Wonder why? Well, for one, kachori was born on Rajasthani land. Although there isn’t much evidence related to the origins of this crispy bite, it is believed that kachori was invented by the Marwaris. One plausible reason given for this claim is that the way several spices are blended together in filling up a kachori is something intrinsic to Marwari cuisine. Not only this, the use of thanda masalas like saunf (fennel) and dhaniya (coriander) in the kachori validate the claim since these cool spices suit the climatic conditions of the desert. 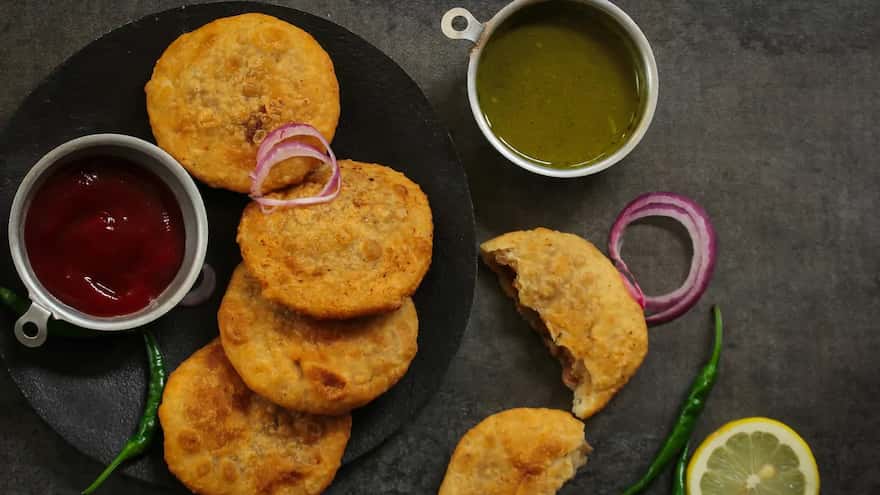 It is also said that since the trade routes of that time passed through Mewar, it was possible for the Marwaris to get hold of the best produce and therefore, create something as delectable as kachori. Gradually, several variants of this kachori started coming up with varying fillings and spices. One such variation was the Khasta Kachori. Stuffed with a spicy mixture made of moong dal and spices, the hard kachori became a popular treat in the region.

The khasta or flaky exteriors of the kachori were well-complemented by the hollow interiors. This is what made khasta such a unique kind of kachori. Today, Khasta Kachori with a thick pea curry is a popular breakfast choice, made at home as well as fried on the streets early in the morning. The curry served alongside Khasta Kachori,  called matra, is made from mashed pigeon peas. Another accompaniment to this dish found in the region is spicy potatoes. The diced potatoes are tossed in spices and garnished with sliced onions and green chillies.

All of this together serves as an indulgent breakfast treat that strikes the right chords with one and all. In Rajasthan, several places serve great Khasta Kachori like the Rawat Misthan Bhandar and Radhe Kachori. You can also dig into their pyaaz kachori with green chutney.

If you want to try making Khasta Kachori at home, here’s a quick recipe.

Monsoon Special: 5 Kachoris That We Can Never Get Enough Of

These Restaurants Are Known To Serve Best Kachoris in Jaipur

Aloo Kachori: Start Your Day On A Crispy Note With This Yummy Breakfast Recipe