Plant-based restaurants are on the rise

Restaurant diners are looking for more sustainable food choices that are good for their health, environment and animal protection. Plant-based restaurants checks all the right boxes. India is generally viewed as a country that is predominantly vegetarian even though this notion is not entirely accurate. According to a survey by the Pew Research Centre published in 2021 39% of Indian adults identify as being vegetarian. For those that do eat meat, 81% of them abide by some restrictions on meat in their diet. With the passage of time and the evolution of society, the culinary landscape of India has become more dynamic. However, with an increased focus on eating healthy and being environmentally conscious, there has been a proliferation of plant-based restaurants across the country. Not only do they provide plant-food alternatives to meats and seafood, but they also offer variety to those looking for choices in protein sources, vegan/vegetarian options to meat, and options for those looking to make a switch to cleaner eating and more. A survey by Rakuten Insight in September 2019 supports these key factors in relation to Indians being willing to switch to a plant-based diet. 52% of those surveyed said they were choosing to consume plant-based food to follow a vegan diet; 50% felt that plant-based foods are healthier and 43% voiced concerns about animal welfare in food production governing their decision. Nidhi Nahata, Founder, Justbe Resto Café, Bengaluru, agrees that the driving factors behind plant-based diet are health, environment, and animal welfare. "There is a visible growth in awareness and consciousness towards eating clean and healthy, especially since the pandemic. Lifestyle based ailments like cholesterol, diabetes, and others, are more evident now, and there is more attention being paid to likely causes – such as the food we eat. Environmentally speaking, consuming dairy, leads to rearing cows on a large scale, which leads to more methane being released into the atmosphere and impacting the ozone layer. And of course, there are animal rights too to look into. A plant-based diet is able to alleviate all these issues to a significant extent". Reiterating these reasons, Tarun Sibal, Chef-Entrepreneur says that at his own restaurants Titlie (Goa) and Street Storyss (Bengaluru), and those he has consulted for like Café Staywoke (Gurugram), and Sidecar (New Delhi), there has been a strong focus on vegetarian and plant-based options. “Street Storyss was conceived as a vegetarian craft kitchen with almost 60 percent of the menu vegan. Guests across the country have been more receptive to the concept of plant-based options. The dining-out sector can’t ignore such a large target group and the sector is increasingly mindful of their needs”, Sibal adds. 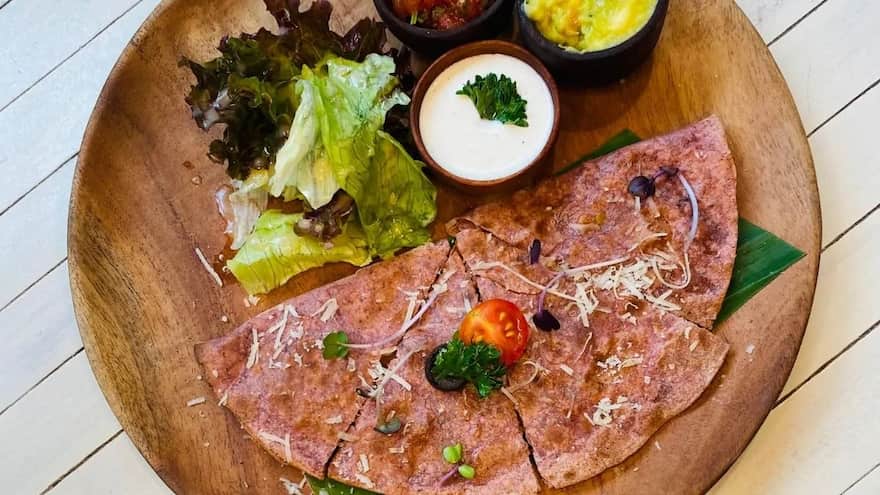 At this juncture, it’s important to note that while dairy products and honey are a part of many vegetarian dishes, they are not technically plant-based as they are produced by animals and bees. No animal product can be considered plant-based food and this is the key difference between a vegetarian and a plant-based diet.

An Avenue for Cleaner Innovation

Over the years, an increasing number of people have embraced plant-based diets and are conscious of what they eat in restaurants. They prefer to eat healthy, clean and cruelty-free food as a way of life. This trend has resulted in the demand for plant-forward restaurants. While there may have been limited options for diners in the early days of this trend, there is an increase in both knowledge and understanding of plant-forward dining today – both among chefs and consumers, according to Abhijit Saha, Chef-Entrepreneur and Consultant. “Such knowledge has given chefs the chance to create plant-based dishes that may not have been possible a few years ago. Additionally, there is an increased use of superfood ingredients that are not just healthy but therapeutic in nature,” says Saha. Some of his creations at Bengaluru-based Pet People Café include plant-based butters served with East Village bagels and mock chicken nuggets. At Glass, Holiday Inn, Bengaluru Racecourse, Chef Saha’s menu includes a mock meat Galouti that would be hard to distinguish from its meat counterpart. Also on the menu is a hemp protein-enhanced cocktail idli among several other dishes. Across Chef Saha’s plant-based options you will find the use of ingredients like hemp heart, moringa powder, lacto-fermented vegetables, teff and the like. The ability to experiment and innovate is something Kaneesha Shah Jain, Owner, Santé Spa Cuisine, BKC and La Poz, Kala Ghoda, Mumbai also finds with her plant-based restaurants. “Using ingredients that are not common or mixing ingredients that wouldn’t generally be together is a strong path that plant-forward menus take. This is what makes it unique, flavourful and attractive to patrons. Buying more from the local vendors and in our case directly from the farmers, not only helps the ecosystem run better but also reduces carbon emissions. Plant-forward, as compared to meat consumption, is always better for the environment in every single way”, she says. The best and the most unique part of a plant-based menu and even cooking is that it utilises and brings the best out of what nature has to offer. “It enables us to extract fascinating and unique flavours out of every fruit, vegetable, legume, bean, herb, spice, and more in the most optimal manner. Avoiding packaged, synthetic, and refined products also saves us from the after-math of serving convenience or our taste buds,” says Nahata. She adds that a plant-based menu develops an intimate understanding of the ingredients you work with and their versatility in terms of consistency, texture, flavour and cooking methods. There is a slow yet growing inclination among diners to make choices based on what’s good for their health and also for their surroundings. People are increasingly aware of the impact of their choices and want to leave a positive mark on the world while enjoying a good meal. While the demand for plant-based options in restaurants and diners growing by the day, there has also been an uptick in demand for options for home cooking. Several brands such as Hello Tempayy, which makes soy-based tempeh, Eat with Better, which uses Jackfruit, Veggie Champ, which makes imitation meat, and even seafood are proliferating by the day.

Chef Saha believes that there is good future for plant-based restaurants. “However it is as dependent on customer demand as also the quality of such restaurants that open up. If not done right the demand can quickly dwindle. The focus of such restaurants has to be on providing a healthy and more sustainable dining experience based on quality and innovation”.

(Views expressed in this piece are those of the author, and do not necessarily represent those of Slurrp)

(Ruth Dsouza Prabhu is an independent Bangalore-based journalist with over 20 years of experience, writing for Indian and international publications on niches like food, beverage and travel.)