Pharre Or Fae’rie; Have You Tried This Kashmiri Winter Delight?

This winter speciality from Kashmir almost dates back to a century. It’s pretty surprising to see how the change of season brings different delicacies in different. Be it summer, monsoon or winter each have their speciality food. Specially  in winter the array of food is much huge and has loads of variety be it Makke ki Roti and sarso ka saag or Gajar ka Halwa or Moong Dal halwa or the exotic Undhiyu or the iconic Nolen Gur each dish in a way represent the state and also shows the huge diversity that we boast of. One such winter specialty from Kashmir is Pharre Or Fae’rie or even Hokh Gaad (Kashmiri Dried Fish) which almost dates back to a century. The preparation to make this rare delicacy starts from autumn itself when they catch kasheir gaed, a variety of trout and then smoked it, later to be savoured during winter. This smoked fish is nothing less than a delicacy in Kashmiri cuisine. Smoking and savouring might seem simple process but believe you be it’s no that easy as the whole process starts even before catching the fish. It all starts with collecting of a variety if grass called the ‘narre gasse”. The grass needs to be dried up and stacked on which the fish will be laid out. The layering o the fish and stacking of the grass makes for an important part of the recipe. Later the grass is lit and mild smoke that keeps coming from that helps the fish to chargrill and get a much unique flavour. This works wonders in enhancing the taste of the fish. The fish is then stocked carefully for use later in winter. If you are walking around the Anchar area of Soura in Srinagar it’s pretty possible that you will spot few families who are busy in layering the fish and also the ones who are keeping the tradition alive. 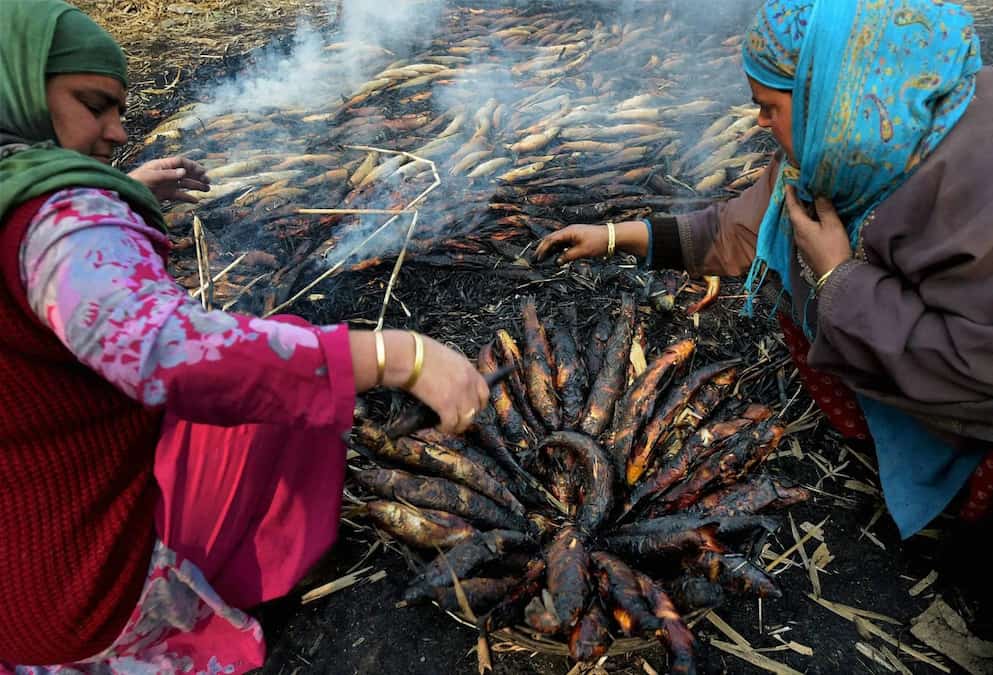 Ekhlas yatoo, Owner walnut world ekhlas yatoo in Kashmir says “cooking this fish is a very delicate process. Once it’s smoked it has to be handled very carefully so that it doesn’t break and while cleaning the chargrilled skin you need to be delicate. It’s cleaned internally and all you need to do is wash and clean away the charred skin. It’s either cooked with Kashmiri haakh (saag) or simply pan to be fried. A special spice mix that’s used in my homes adds to extra flavour of the dish. We also believe that this fish Hokhe Gad” is capable to cure the worst colds and flu”.

Each winter you can see Kashmiri woman selling Pharre on the streets. Priced almost around Rs 300- 600/kg, this art of making the smoked fish is soon loosing it’s people as it’s time consuming. The fish sees a very strong aroma while it’s being cooked. Amongst all the various way to cook this smoked fish, cooking it with some vegetables till the water dry and the spices blend well is the most sought-after way. Enjoyed best with hot steam rice this winter land delicacy gives comfort in cold chilly weather.

Lyodur Tschaman: A Kashmiri Delicacy That Is Sure To Get You Hooked

How About Some Kashmiri Nadru Kababs And Goshtaba