Panki: A Gujarati Breakfast Dish Wrapped In A Banana Leaf While each culture has their own unique dishes, what’s intrinsic to Gujaratis is their farsan. It is a term used to refer to Gujarati snacks. However, these tid-bits are not meant for snacking alone. Many dishes like dhokla and khandvi make it to the breakfast table too. While these are the popular ones, a lesser-known dish that is found specifically in Gujarat is panki.

It is a type of regional pancake, made with rice flour batter. Although pancakes are often associated with foreign cultures, the desi versions have also existed for a long time now. Take chilla, for instance. Besan, also known as gram flour batter, is mixed with spices and herbs, along with some onions and other veggies and cooked until it turns thin and crisp. Similarly, you’d find several such pancakes being made in the hilly terrains of Himachal Pradesh and Uttarakhand too.

The Gujarati version of the same is panki. A humble breakfast dish that is commonly eaten in the region, panki is made with rice flour batter but what plays a key role in its flavour and texture is the banana leaf it is cooked in. It is the cooking technique of panki that makes it so unique. Banana leaves are cut into large rectangular shapes. Then, the batter, consisting of rice flour, turmeric and other spices is layered on the leaves. 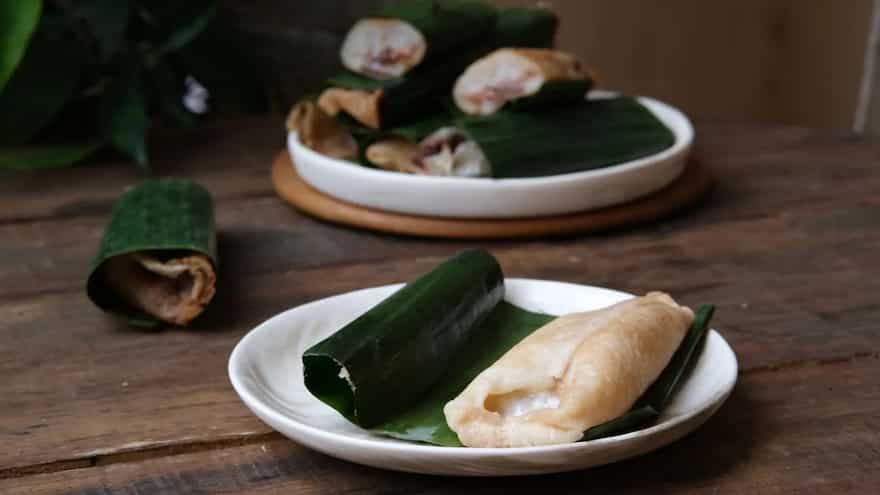 Wrapped between the oiled banana leaves, the dish is shallow-fried. Finally, it is taken out and the leaves are peeled off gently, so that the batter separates from them. The colour and texture of this dish is often compared to a Vietnamese Banh Xeo. For the unversed, this is a type of savoury pancake that features the classic combination of rice flour, turmeric powder, and water and commonly eaten for breakfast in Vietnam.

To make panki at home, one needs to start by preparing the rice flour batter, where curd and salt is added and it is left to ferment. Then, turmeric, ginger-garlic paste and cumin seeds are added to the fermented batter. The banana leaves are oiled properly, and the batter is uniformly spread on one half of the leaf. Next, it is folded from the other end and tossed on a pan slathered with oil. Once the panki turns crispy, it is time to remove it from the stove. Careful peeling is required to attain the shape and texture of the panki inside.

This pancake is, then, paired with coriander chutney and eaten for breakfast. While the traditional recipe always uses rice flour, you will also find other kinds of flours being used to make the batter, including lentils like moong dal and corn.

Dahiwali Roti: This Gujarati Breakfast Is Soup Of Curd And Roti