Since India is largely an agro-economy, it comes as no surprise that harvest festivals are such an intrinsic part of celebrations across the country. Be it Baisakhi or Makar Sankranti, each one is celebrated with utmost fervour and joy. One such festival in South India is Onam. A widely-known festival in Kerala, Onam falls during the Malayali harvest season and lasts for about 10 days. During this time, a special feast - called Sadya - is prepared.

Food is an essential part of most celebrations. Similarly, during Onam, people relish a lavish feast that consists of a variety of dishes. The Onam Sadya is a multi-course meal that consists of everything, from starters to curries and rice, followed by desserts. A combination of 26 dishes are served during the feast and everything is purely vegetarian. Traditionally served on a banana leaf, there is a systematic order in which each dish is served and the placement of them on the leaf.

Since it is an elaborate meal, the preparations begin way in advance before the festival. This year, Onam will be celebrated from August 30 until September 8. While the idea of sitting together and serving food to everyone during Onam is driven by the motivation to encourage community eating, each of the dishes included in the feast holds certain health benefits. For instance, kalan is a delicious yam and sweet potato curry made with buttermilk and coconut. This actually serves as a probiotic and helps in improving gut bacteria. 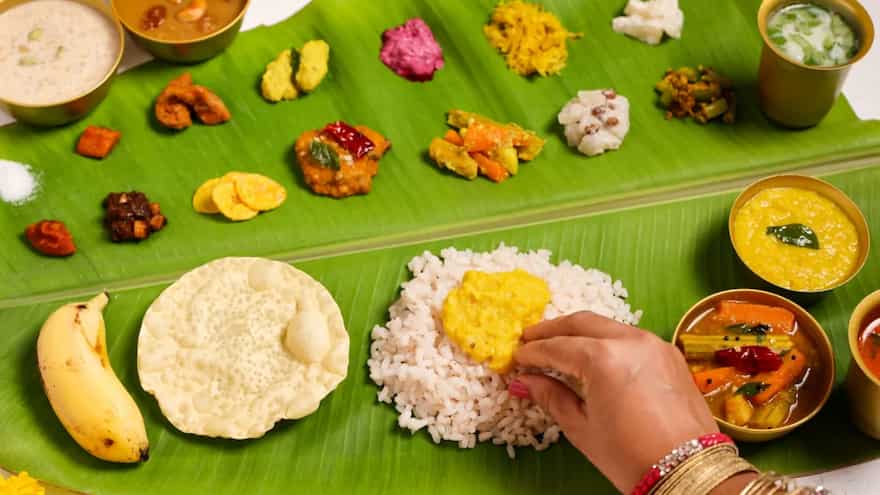 The meal is considered a very nutritious feast that comprises a range of healthy elements - including antioxidants, calcium, gut-friendly items, and more. Pick any vegetable, pickle or dessert and you’ll find a nutritional value attached to it. The Parrippu payasam is one such example. This heavenly dessert is made with dal, which is a great source of protein, jaggery which is rich in iron and coconut milk which lends a creamy texture to the sweet meat.

Moreover, it is not just the dishes that are beneficial for one’s health but also the way the meal is served and the method of eating it that add to its nutritional value. The act of serving food on a banana leaf holds immense benefits because it is believed that the leaf contains antioxidants that mix with the food when warm food is placed on it. Along with this, it is also rich in a range of vitamins and minerals.

Another aspect of this festive Onam Sadya is that the food is eaten with hands. While eating with hands has been quite prevalent in India since times immemorial, it is said that the idea is driven by the fact that the touch of hands and fingertips with the food puts all the chakras in motion, connecting one to the heart and mind. This helps in attaining physical as well as emotional well-being. Hence, the Onam Sadya is deemed as one of the most balanced meals, providing the sodium through chutneys and pickles, carbs through rice and other essential vitamins and minerals like dietary fibre through curries and vegetables served on the platter.

Onam Sadhya: The Massive Vegetarian Feast You Must Try Once In Life

Onam Sadya Special: Bring Home The Flavours Of Kerala With This Kadala Curry

Onam 2021: 5 Onam Sadya Special Desserts You Have To Try Soon