Okra: How It Made Its Way To India Okra or Okro, is a flowering plant in the mallow family that goes by several different names in English-speaking nations. Green seed pods on it are tasty. There are many who believe that okra originated in West Africa, Ethiopia, Southeast Asia, and South Asia. The plant is widely grown in tropical, subtropical, and warm temperate regions of the world. It is a prominent ingredient in Southern American cuisine as well as Middle Eastern, Indian, Brazilian, and Sri Lankan cuisines.

Bhindi (Hindi), Lady's finger (English), Bendakaya (Telugu), Bhinda (Gujarati), and Okra. Numerous names for a single vegetable. However, Bhindi is exclusively referred to as Bhindi in India. Okra is the name that is used most frequently in different parts of the world.

The Igbo word Okuru is the source of the term "okra." Nigeria uses the Igbo language. Although the name's history can be traced to west Africa, the vegetable actually originated in east Africa. The Russian botanist Nikolai Vavilov wrote a paper that was published in 1926. He provided a thorough description of the origins of many plants in it. Understanding the history of globalisation and the history of agriculture greatly benefits from Vavilov's identification of the "main centres of origin" from which all plants on the globe descended.

Abyssinia is one of these areas of origin. This comprises the higher region of Sudan, the Eritrean plateau, and modern-day Ethiopia. This area is where okra first appeared. Determining how the veggie got from Eritrea to India is exceedingly challenging. It was thought to have grown in Egypt for a very long time before making its way to India. Additionally, it is still hard to trace how Okra from Eritrea ended up in Egypt.

Okra is thought to have been introduced to India by the Bantu tribe, which moved there from Egypt around 2000 BC. They began growing the okra using the seeds they acquired as they travelled from the Eritrean plateau to the valleys of India and China. However, there is no proof that Bhindi was a part of the time's Harappan civilisation. That could indicate that the Moors may have arrived later. In the seventh century, Egypt was dominated by the Muslim people of East Africa. It is thought that during this time, okra travelled from Ethiopia to modern-day Saudi Arabia. Additionally, it migrated from Saudi Arabia to the Mediterranean and South Asia. 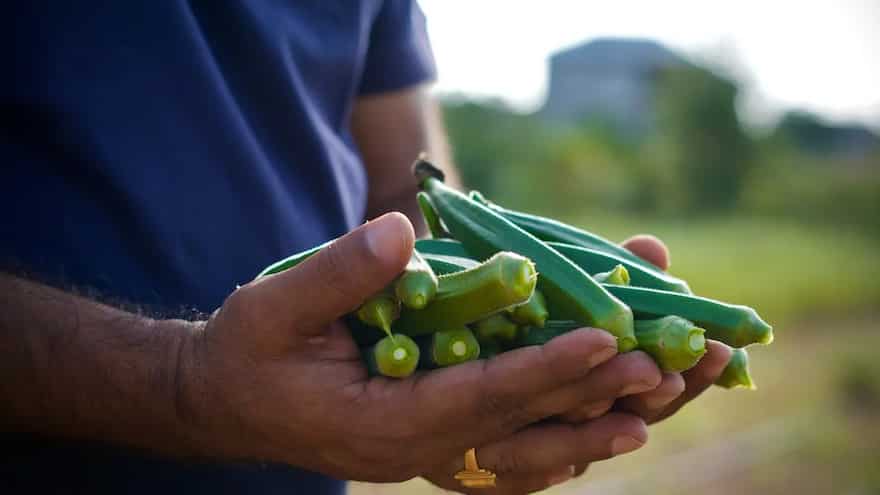 The Western Chalukyan Dynasty's Bhulokamala Someshwara III, who ruled from 1126 to 1138 AD, made reference to "bhandi," which has a similar sound to "bhendi." Someswara was a learned scholar-king who earned the moniker Sarvadnya-bhupa, or "The King Who Knows Everything," from his followers. He was the first king of good times in many respects. The first recipe for bhindi masala was published by Someshwara in his work Manasollasa. His recipe is as follows: Bhendi should be cut, Douse the pieces in haldi, Fry them crisp in boiling oil, on top of a dish of whipped yoghurt, sprinkle them.

A vegetable known as "bhandi" or "bhanti" was referenced by the renowned Ayurvedic scholar Charaka fifteen centuries ago. He described "bhandi," which closely resembles the appearance of bhendi. This strengthens the case for the notion that Bantus brought it along. The vegetable bhindi is frequently consumed. However, you can eat the leaves as well. They can be prepared to consume or added to salads. Likewise, there are several uses for okra seeds. They make an excellent caffeine substitute when roasted and are far healthier than caffeine. Oil is produced when the seeds are removed. Okra oil has unsaturated fats and a nice scent.

Despite all of these fantastic applications, bhindi is primarily consumed in India as a vegetable. The leaves and seeds of bhindi are rarely used in recipes. Indians are huge fans of bhindi. However, the seeds and leaves of okra are particularly well used in Africa. The modest okra, when cooked and sliced finely, is used in many different dishes and feeds billions of people worldwide.

Crispy Bhindi: These Crunchy Okra Fries Are Too Tasty To Miss