There is nothing like a spoonful of Nutella to satisfy your sugar cravings. Imagine how good it would be to incorporate this dreamy ingredient in desserts too! It starts doing its chocolaty magic from the first bite itself! Take a look at these Nutella recipes that we've rounded up for you, and whip them up right away if you're in the mood for something sweet and indulgent!

Wien is known as the birthplace of croissants, as croissants are a style of viennoiserie pastries. From the 13th century onward, the kipferl, which was a variety of shapes and sizes, was the ancestor of the croissant. In addition to being filled with nuts or other fillings, kipferl is also considered to be a form of rugelach, a Jewish pastry of Ashkenazic origin. We think of croissants as being denser and sweeter than they really are. In the 17th century, the style of dough used in traditional croissants was first documented. However, the origins of the traditional croissant are still a mystery. According to legend, Viennese bakers heard the Turks tunnelling beneath the city during a 1683 invasion. By alerting the city's defenders, they essentially saved it from the Ottoman siege. Symbolizing the crescent moon on the Turkish flag, the bakers created a pastry that would represent the celebration. Vienna's victory over the Turks was commemorated with the German word kipferl or crescent. A baker named August Zang is credited with introducing the croissant to France for the first time. During the early 1800s, Zang operated an upscale patisserie in Paris called Boulangerie Viennoise, after his native Vienna, that served many of the city's famous treats, including kipferl. As a result of their crescent shape, Parisians began calling his croissants because they were flakier than the traditional sweets. 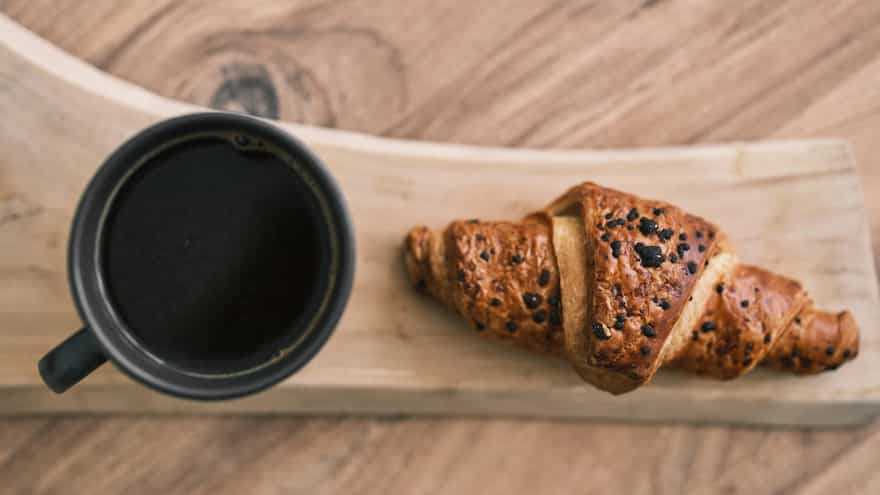 1. Two cups of bread flour (plus extra for dusting)

3. One and a half tbsp sugar

4. Half a packet of fast-action yeast

8. One and a half cups of bread flour

1. Combine flour, salt, sugar, and yeast in a large bowl. Bring the dough together with a wooden spoon, then tip out onto a floured surface and knead for five minutes.

3. Place eight balls of Nutella on a small tray using a small ice cream scoop. Put into the freezer to firm up.

4. When the dough is almost ready, heat the clarified butter gently until melted. Take the pan off the heat and stir in the flour. Set aside.

5. Roll out the dough into a rectangle about 16 inches wide by 8 inches high after it has been taken out of the fridge.

6. The butter paste should be brushed all over the dough in a thick layer.

7. Cut the dough into four equal strips, top to bottom, using a small knife. The two outside strips should be folded inward, butter side up, onto the middle strips. You can brush more paste onto these two strips and then fold them together. Put the plastic wrap back on and place it in the refrigerator for 20 minutes.

8. Remove the dough from the fridge and roll it out to a rectangle of 16 by 8 inches. Wrap again and place in the fridge after repeating the brushing, cutting, and folding process. Once again, repeat this (three times in total), then place it in the fridge for 20 minutes.

9. Bring the dough out of the fridge after the third layering and chilling, and roll it out again to 16 by 8 inches. Starting at one short end, roll the dough into a sausage after trimming any rough edges and brushing lightly with water. Eight equal slices of sausage should be cut from the sausage.

10. Out of the freezer, take out the Nutella balls that are firm. Place one slice of dough in the palm of your hand. Create a 3-inch circle by pressing the edges gently and making the middle thinner than the edges. Bring the edges in, dab with water, and pinch together to seal. Place a Nutella ball in the middle and secure it with a pinch.

11. The seam should be facing down on the right side of the ball. Put it on a floured tray and gently shape it into a dome. Continue with the rest, then cover with lightly oiled plastic wrap and leave to rise at room temperature for 30 to 45 minutes.

13. After the dough balls have risen slightly, gently lower one into the hot oil, seam side up. Leaving it in the oven for 2 minutes, or until golden brown, remove it from the oven and place it on a piece of kitchen paper to drain. Put the rest on a tray and bake them for 12 to 15 minutes, or until they are cooked through.

14. A small bowl should be filled with sugar. After the bombs are out of the oven, dip them in the sugar and let them cool on a wire rack for five minutes.

Time To Indulge In The Deliciousness Of Chocolate-Butter Croissant Pudding

From Pasta To Croissant: Add A Desi Twist To These Global Favourites