Compiled by Maharani Kumud Kumari of Gondal, ‘Recipes of a Maharani: Secrets from the Gondal Palace’ explores cuisines and influences as diverse and multi-layered as her personal history and that of the princely state In The Mughal Feast, historian Salma Yusuf Husain’s transcreation of Shah Jahan’s cookbook Nuskha-e-Shahjahani, there are enticing glimpses of what comprised ‘food fit for a king’s table’. Or in this case, the floor - as that’s where the emperor and his courtiers would be seated while being served their meals, with white calico sheets on leather covering the expensive carpets, to protect from spills and stains.

We’re told that Shah Jahan’s food was prepared with fresh rainwater and water from the Ganga. That each individual grain of rice in the pulaos served to the emperor had to be coated in silver warq, to aid digestion and act as an aphrodisiac. We read of a decadent delicacy that was part of the royal repast: a whole, grilled goose that went through four separate bastings, including sandalwood powder and almond paste, and was stuffed with minced lamb meat. Shah Jahan’s meals were served in plates of gold and silver, inlaid with precious stones and jade, meant to detect traces of poison. Each menu was planned in consultation with the emperor’s hakim, to ensure it provided the best mix of nutrition and taste.

Not every royal repast was as luxurious as the ones outlined in the Nuskha-e-Shahjahani, of course, not even those of other rulers of the Mughal dynasty. And Shah Jahan himself was reduced to eating just one staple in the final years of his life, when imprisoned by Aurangzeb. He chose chickpeas, for the variety of preparations in which it could be used. But over the years, royal cuisine has continued to remain a subject of fascination for historians, food enthusiasts and chefs, epicures and the layperson alike. A spate of food festivals that recreate recipes from royal kitchens across India, and cookbooks that dish out the cuisines of erstwhile princely states, have only whetted this appetite.

It is in this flavour-scape that a new cookbook, by Maharani Kumud Kumari of Gondal, makes its appearance. Recipes of a Maharani: Secrets from the Gondal Palace is a compilation of 50 recipes that are among her personal favourites, straddling cuisines and influences as diverse and multi-layered as her personal history and that of Gondal itself.

“In India, every kitchen has several different stories to tell… Stories about recipes inherited from grandmothers, those discovered on travels, and ones invented to pass on to the generations [that come] after you. This is how the food in my kitchen has come together too,” Maharani Kumud writes, in the foreword to her book. 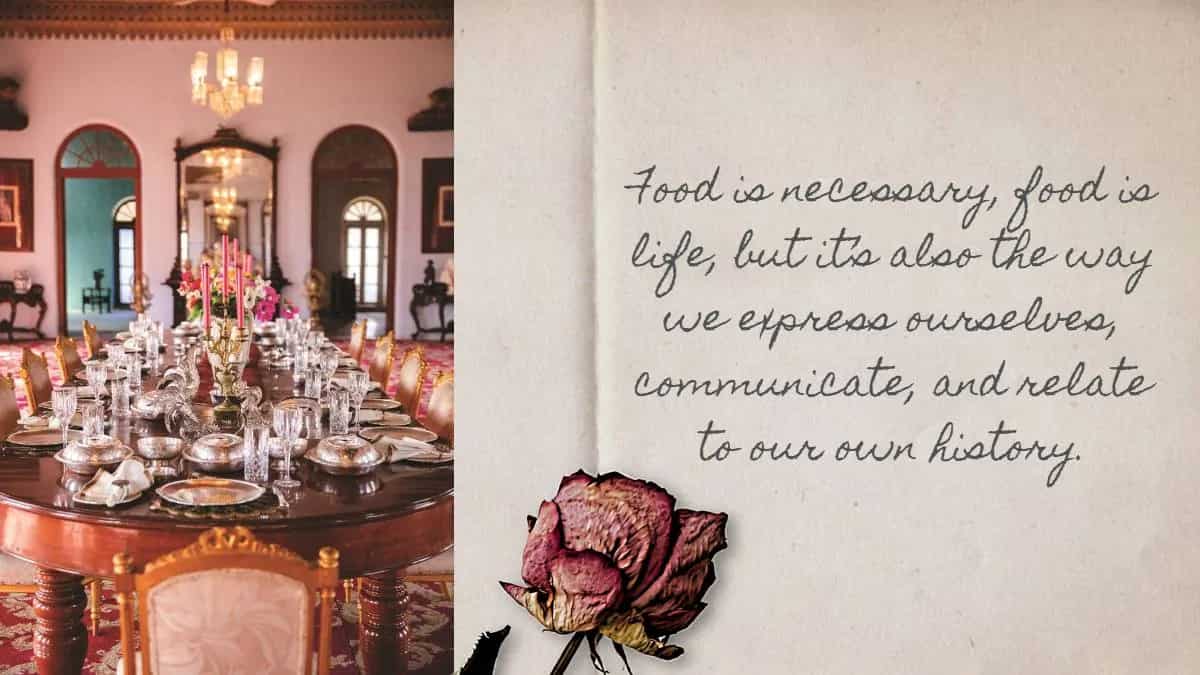 The process of working on the cookbook began over a year ago, with the meticulous testing and writing of recipes. But its genesis perhaps can be traced all the way back to Her Royal Highness’ mother, Manhar Kunver of Bhavnagar. “My mother hailed from the Malwa region, in present day Madhya Pradesh. Not unlike the women of her generation, she was brought up with considerable training in the kitchen, a skill she made sure I inherited. Unusual for that time though, the most interesting recipes she learnt were from her father who was an outstanding cook. He taught her many of the skills and techniques that I went on to learn from her,” she shares.

In an interview with Slurrp last week, Maharani Kumud noted that apart from these three generations of food traditions, her cookbook draws from the cuisines of three places as well: Malwa, Manhar Kunver’s maternal home; Bhavnagar, where Her Royal Highness grew up; and Gondal, where she came after marrying Maharaja Jyotendrasinh. “When I married into the palace of Gondal, in Kathiawar, I was introduced to a completely new cuisine,” she observes. “The Kathiawar region is dry, with few leafy vegetables available, and an abundance of local spices. Theirs is truly a hardy cuisine.”

Her new home sparked a journey of ‘adding new stories’ to her kitchen. As Maharaja Jyotendrasinh and Maharani Kumud travelled extensively in India and abroad, every destination they visited presented an opportunity to learn about local food. The families that hosted the couple were ‘also generous in sharing their kitchen secrets’ with Her Royal Highness. Then there were the many royal banquets, featuring a mix of Gujarati vegetarian and Continental cuisines, that the palace hosted for visiting dignitaries like viceroys and generals over several years - these dishes also became part of the family’s dinner table over time. Her Royal Highness recounts a popular delicacy from those menus: brain cutlets, accompanied by mustard sauce. “And in Indian food, [in] those days, we’d cook a wild hare underground, which took half a day.” 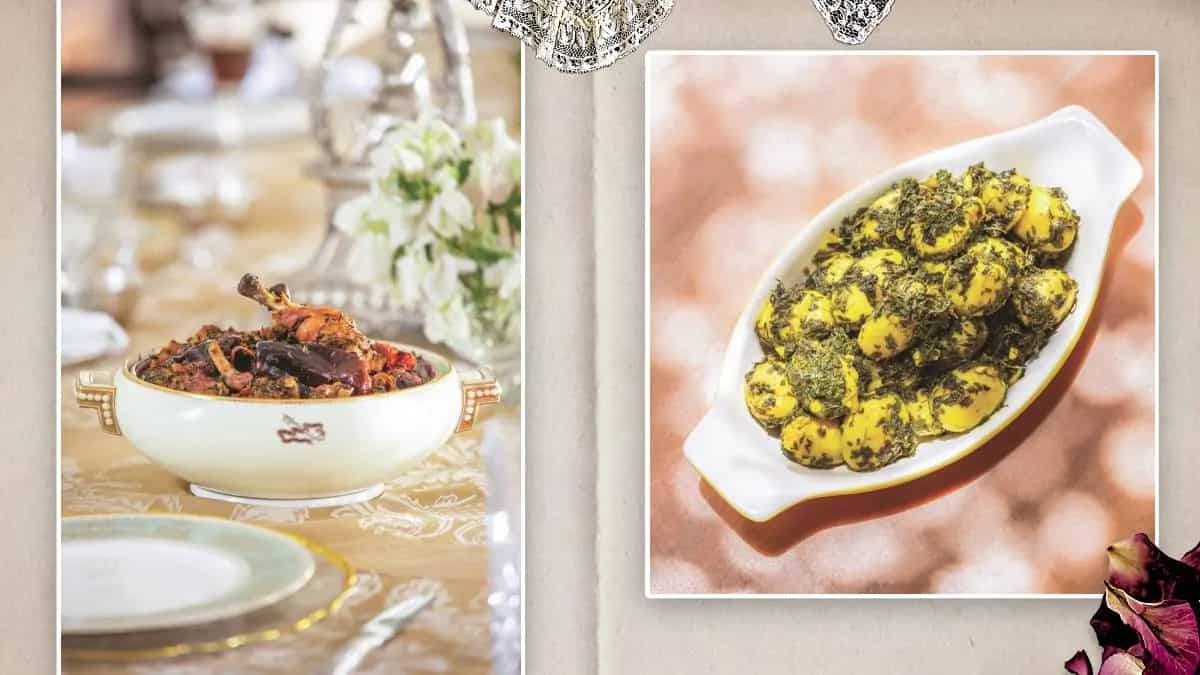 The breadth of culinary influences is seen in Maharani Kumud’s book, in dishes such as the Irani Mutton (meat cooked with apricots) inspired by her travels, and Chicken Baaganer from her mother’s ancestral home. There is the Signature Gondal Chicken, which finds place alongside a contemporary twist on an ancient recipe for Methi ni Aantiyu (fenugreek in chickpea flour), and Mawa Mung Dal (green gram lentils with milk curd). Fruit Fools and a very unexpected Mutton ke Gulab Jamun (exactly what it sounds like) are among the standouts of the section on desserts. Chutneys and pickles, vegetarian and non-vegetarian preparations, rice dishes, and spices and special ingredients comprise the other sections.

For the book, each of these dishes has been photographed in vintage crockery collected by Maharaja Jyotendrasinh’s great-grandfather Shree Bhagvantsinhji, the ruler of Gondal from1888 to 1944. Archival photos of the palace, images of the dining rooms - complete with hand-carved furniture and elegant place settings - add to the historical heft of the cookbook.

Maharani Kumud agrees that the style of cooking in the book may not necessarily tie in with the Instagrammable food prep that is more widespread today, but she feels the former will endure. “Yes, different kinds of cuisines are evolving and so is the style of cooking. The traditional style involves fermentation processes, cooking on low heat and making everything from scratch within your own kitchen. Nowadays you get all kinds of ready-to-eat food, ingredients that are already processed in machines to simplify the [life of the] modern homemaker, but I feel people do have their doubts regarding the quality of [such] contemporary food,” she reasons.

Her cookbook, Maharani Kumud hopes, will attest to her belief that “preserving traditional foods and ingredients is key, for a variety of reasons - and that it can be gracefully integrated with responsible, interesting, delicious fusion cuisine”. “Food is an integral and important part of our culture,” she says, adding, “Food is necessary, food is life, but it’s also the way we express ourselves, communicate, and relate to our own history.” •    Place the mutton or lamb mince in a food processor, and grind to a very fine paste.

•    Add the cashew powder, yoghurt, cream and baking soda and mix together until well-combined.

•    Divide the mince mixture into equal portions and roll each into small balls between your palms.

•    Heat the ghee in a heavy-based wok on medium high heat.

•    Carefully add the mince dumplings in batches and fry them until they’re cooked and golden on all sides.

•    Add sugar to a pan on low heat. Add an equal amount of water and stir until the sugar dissolves and is at one string consistency.

•    Once the sugar syrup begins to thicken, take off the heat and let it cool slightly. Add in the fried mince dumplings.

•    Allow the dumplings to soak in the sugar syrup for at least one hour. Serve warm.

Roopa Nabar On Her Cookbook, Maharashtrian Kitchens And More