The actor, who is all set to embrace motherhood, recently indulged herself in a pampering session, and enjoyed a heavenly dessert. Lately, Alia Bhatt has been taking the internet by storm every now and then. Be it her dreamy wedding to actor Ranbir Kapoor in April, the announcement of her Hollywood debut with Gal Gadot, the launch of Brahmastra trailer, and now breaking the news of her pregnancy, 2022 has been nothing short of a blissful year for Alia, both personally and professionally. And thanks to the internet, we know a lot about this popular actor. Alia enjoys a massive fan following on Instagram, and fans are often treated to inside snippets from her life. Alia is quite regular in sharing glimpses of her diet, vacations, and moments with friends and family. And that is how we know how she is also a foodie.

Many of her posts are about love for food, and her latest Instagram story proved how she also has a sweet tooth. The actor, who is all set to embrace motherhood, recently indulged herself in a pampering session, and enjoyed a heavenly dessert. Can you guess what it was? It was the popular Italian dessert, Tiramisu. On Sunday night, Alia shared an aesthetic photo on Instagram featuring a jar of delicious Tiramisu and a book. Take a look: 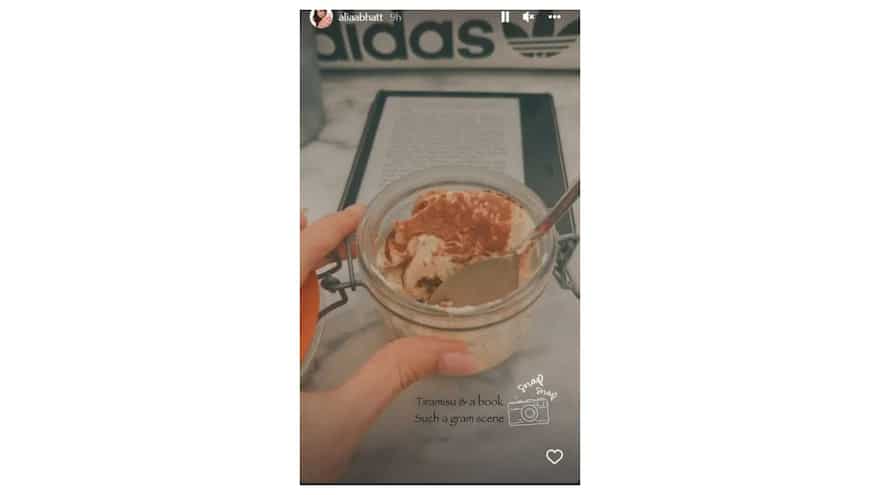 Well, that definitely looks decadent, doesn’t it? “Tiramisu & a book... Such a gram scene”, wrote Alia on the picture. Also known as the ‘pick me up’ or ‘cheer me up’ cake, Tiramisu is a coffee-flavoured Italian dessert made with savoiardi (or ladyfingers) layered with mascarpone, doused with espresso and dusted with cocoa powder. While it exactly means ‘pick me up’, and comes from the Treviso dialect, tireme su, the terms were modified to tiramisu in the 20th Century. However, the dessert itself originated in Treviso in Italy in 1800.

Ado Campeol, who is also better known as the ‘Father of Tiramisu’, is credited with the invention of Tiramisu, as it is believed that the iconic dessert was born at his restaurant ‘Alle Beccherie’ in Treviso. Legend has it that it was an accidental invention wherein the restaurant's chef Roberto Linguanatto along with Campeol’s wife Alba mistakenly dropped mascarpone in the egg and sugar mix while making vanilla ice cream. They noticed how well they complimented each other, and further perfected it by adding coffee-soaked lady finger sponges, thus making the heavenly dessert. Isn’t it interesting how simple accidents can make way for iconic desserts?

Now, if Alia has made you crave some Tiramisu too, we’ve got you covered with an easy recipe right here.

Remember When Alia Bhatt Celebrated With A Vegan Burger?