Mindy Kaling's Home-Cooked Gujarati Binge Has Got Us Cravings Indian regional food is one that can make any desi go weak in the knee, no matter what part of the world you are in. And Indian-American celebrity Mindy Kaling is no different. One of the most popular celebrities in Hollywood, Mindy is known for creating the hit show "Never Have I Ever" to star in the iconic show "The Office". Mindy has been representing the Indian community in the industry for over a decade now and we absolutely love how she loves Indian food, and never leaves a chance to show it off. Yes, you read it right. Mindy Kaling is a big foodie and she loves to indulge in Indian food every now and then. Despite being born in the United States Of America, Mindy has made sure to remain connected to her Indian roots through her food habits.

A half Tamilian and half Bengali, Mindy loves to indulge in all Indian cuisines! In a video from 2019, she was also spotted cooking masala dosa with the then United States senator Kamala Harris. However, Mindy seems to have a soft spot for Gujarati food. Wondering how we know that?! Her latest Instagram story is proof of the same. Mindy was spotted drooling over Gujarati food not once but twice now! Taking to her Instagram account, Mindy shared that she has been enjoying delicious Gujarati home-cooked food. Take a look: 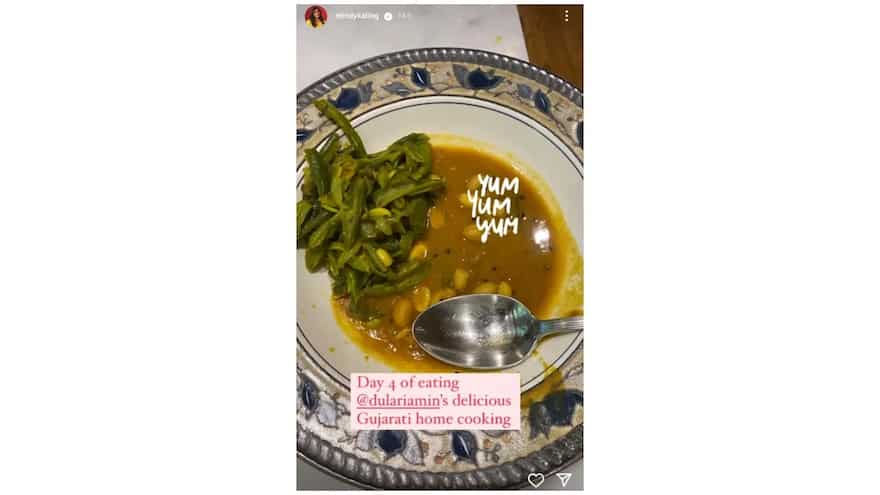 In the image she shared, we saw her eating a Gujarati-style sabzi which seems to have beans in it, along with a Gujarati curry. "Day 4 of eating @dulariamin's delicious Guajarati home cooking "Mindy wrote along with the story. The meal looked all things comforting and delicious! Besides anything, Mindy’s Gujarati feast has got us craving too. And if you are on the same boat as us, we’ve got some Gujarati recipes right here for you.