Enjoy this flavoursome snack with a cup of tea The most common type of nut consumed in India is peanuts. All of us have grown up consuming these peanuts, which are known as moongfali, in a variety of forms. In fact, India is the world’s second-largest producer of peanuts. Food lovers enjoy Masala Peanuts as a delicacy snack that are readily available in a variety of spices. Masala peanuts are considered an all-time favourite snack, which is easy to prepare and gives a satisfying taste.

You can prepare this snack with a variety of spices and try it at home in a minimal amount of time. This is the only snack that you can assemble while conversing with your guest without them becoming bored. Peanuts are full of energy, which provides you with a strong zest to fight your mundane day. There are so many benefits associated with peanut products. First, it helps you lose weight and prevent heart-related diseases.

Spanish explorers learned about the flexibility of the peanut and spread it throughout the New World from its original home in South America. The Spaniards introduced peanuts to Europe. Since peanuts were already being consumed as nuts, oil, and peanut butter by the 20th century, innovations greatly simplified the process of cultivating and collecting them. At this time, while a boll weevil infestation was devastating cotton crops, more farmers started to produce peanuts.

In the modern world, peanuts are grown all over the place, with China and India producing the most. Peanuts are hardy, simple to cultivate and provide a lot of nutrition in a small container. In fact, a quarter cup of peanuts has a lot of biotins, folate, copper, manganese, molybdenum, phosphorus, Vitamin B3, B1, E, and biotin. Additionally, it meets almost one-fifth of a person’s daily protein intake.

Masala Peanuts is a healthy and delicious snack to have in the evening. You can serve it with a hot cup of tea. It will provide you with a crispy and munching flavour with so many benefits, so try this recipe at home and surprise yourself. 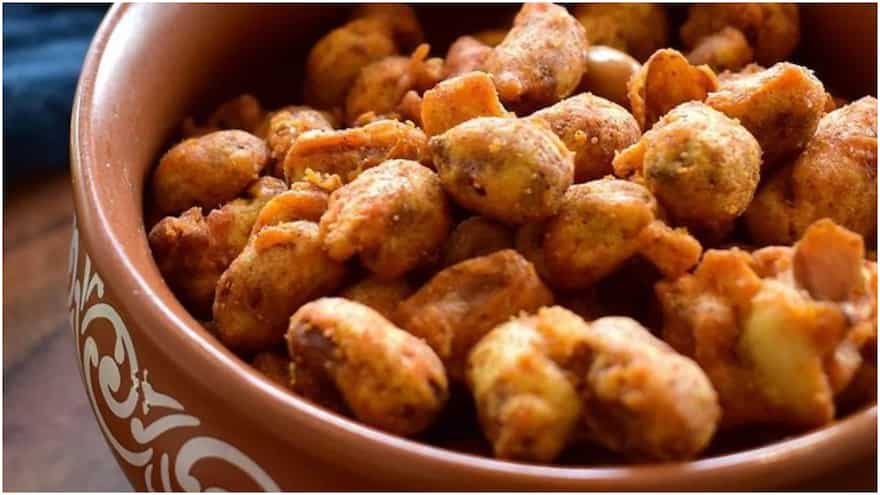 Here’s the recipe for Masala Peanuts.

Rich Peanut Laddoos: Loaded only with Goodness and No Sugar

How Peanuts Help In Losing Weight