Did You Know About These Dishes Mentioned In Timeless Epic Mahabharat?

In Mahabharat, the Kshatriyas used to eat all types of food because they were fighters while other people were normally vegetarian especially Brahmin and Vaishyas. There is no denying the fact that Mahabharat has been an ultimate and timeless epic that we all know about. Many of us watched BR Chopra’s Mahabharat aired in the 1980s and we were again taken back to memory lane when this epic was aired once again on television when the lockdown was imposed. I can bet on this that many have seen it not once but hundreds of times and know the entire history of every single character.

Also Read: Is It True That The Mythological Tale Of Mahabharata Entails The Origins Of Dal?

Revolving around two branches of a family i.e. the Pandavas, and the Kauravas, it is a tale of families and their fates. Depicting a battle for the throne, Mahabharat is one of the greatest epics as per Hindu beliefs after Ramayana. Since it has a story of generations, it extended over a long period. And if it has been for so long, there has to be some fascinating food. There are a couple of dishes that have found mention in Mahabharat and are eaten even today. What are those?

Golgappas are undoubtedly the king of Indian street food and hold a special place in the heart. Also known as puchka, gupchup, panipuri, and others, golgappas are one of the most popular snacks available at every nook and corner of the country. Some say that golgappas were introduced by the wife of Pandavas, Draupadi when her mother-in-law challenged her to make something with the leftover aalo ki sabzi and dough. It was when she made golgappas and also blessed the dish with immortality.

Payasam or rice kheer is a delicacy consumed in every Indian household even today. It is made by boiling rice in milk along with sugar/jaggery and dry fruits. Typically, the only difference between kheer and payasam is that kheer is mostly made up of sugar while payasam has jaggery for sweetness. Moreover, the consistency of payasam is also thinner. This rice delicious dessert was something Yudhishthira, the eldest among the five Pandava brothers, loved having. Samvaya is yet another popular dish made during the era of Mahabharat. This too was a dessert and made from wheat flour, milk, sugar, aromatic spices, and later fried in Ghee. We could say that this dessert is quite similar to “Balushahi”. Sashkuli is a Sanskrit word for a dessert made up of rice or barley in sugar water, as per Hindu beliefs. It also has a mention in the Bhagavad Gita and is described as a dessert having the shape of an ear. Much similar to this is ‘Jalebi’ which we eat fondly even now and is also made with all-purpose flour. Krisara is yet another dessert that has found its mention in one of the great tales as per Hindu religious beliefs. Made up of rice, milk, sugar, sesame seeds, cardamom, saffron, and cinnamon, it looks similar to kheer but the rice in this dessert is completely mashed that one can hardly spot with a naked eye. It has a liquid consistency and also has its mention in Santi Parva.

Avial is an Indian dish that has its origin in Kerala. As per many Hindu beliefs, this vegetarian curry made with curd and coconut milk is said to be originated by Bheem, one of the Pandavas. When Bheem was working as a cook in the kingdom of King Virata, he had to cook something for Rishi Durvasa who was known for his ill temper and habit of cursing if not satisfied. On not finding sufficient food in the kitchen, Bheem made Avial with vegetables and whatever ingredients were available. Rishi Durvasa was pleased to have the dish. The dish gained much popularity and the rest is history. 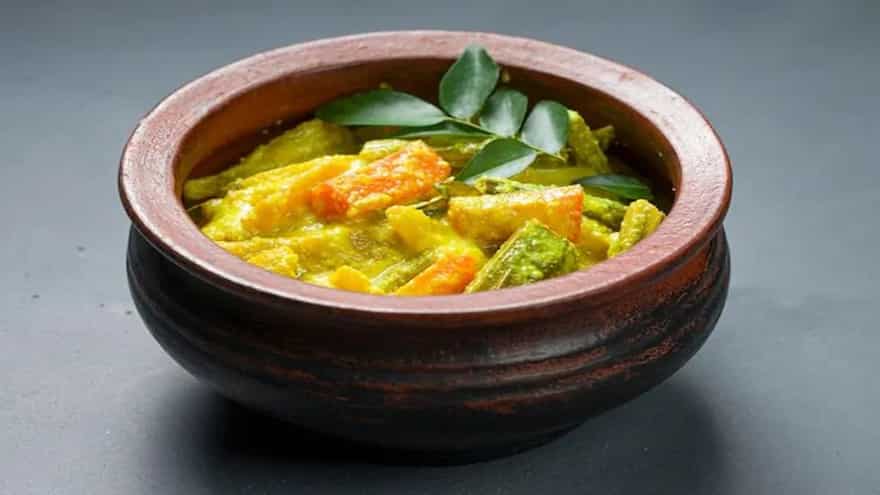 This might look hard to believe but yes, many non-vegetarian dishes were cooked in the era. The Mahabharat has many references to minced meat and cooked rice. As per many sacred scriptures, even buffalo meat was cooked in ghee with fruit juices, caraway seeds, asafoetida, and rock salt and served with a touch of lemon. The people then used to enjoy the meat of hunted animals a lot.

No matter how hard we try or how modern we get, we can never get over eternal tales like Ramayana or Mahabharat. Let us know if you know any such dish or ingredient that finds its connection with Mahabharat.

Panchmel Dal: Find Mentions Of This Lentil In The Mahabharata