Cooking food wrapped in leaves has been an ancient practice Food cooked by wrapping in leaves has been an age-old practice across the world. Often such dishes are devoured in various ways, with or without the leaf. A few most famous examples would be Bibingka from the Philippines, Pasteles in Latin American nations, Pepes from Indonesia, Kakinoha-Zushi from Japan, and Tamales in Mexico. These dishes get their flavour from the rustic aroma of the leaves. An array of leaves are chosen for such traditional and healthy dishes. The list is exhaustive: banana leaf, turmeric leaf, jackfruit, bay leaf, screwpine, sal leaves and colocasia ( arbi) leaves. Food historians and researchers believe that this cooking method has its traces in the era when our predecessors' food source was hunting.

Also Read: Lunch Special: This Chicken Paturi Is A Lovely Spin To An Iconic Bengali Fish Recipe, Can You Guess?

Indian cuisine has several such delicacies, famed for their exotic taste, earthy aroma and healthy quotient. The cooking method often involves steaming or grilling. The leaves work as an excellent cover, shielding the food from direct heat while locking or retaining the required moisture and flavours. If you haven't come across them yet, here are a few fascinating delicacies.

Kancheepuram idlis are traditionally steamed in a bamboo basket lined with bauhinia plant leaves. In the local language i.e., Tamil, this plant is called Mandharai and Kachnar. The English name is Mountain ebony for the shrub. When the idlis get steamed in mandharai leaves, they gain a distinctive aroma and taste. Now a days, as these leaves aren't readily available, many people use plantain leaves. 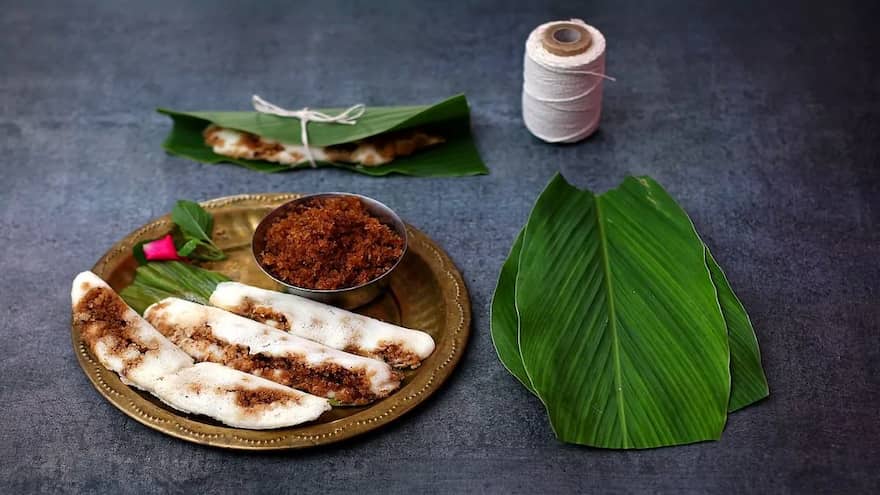 A traditional sweetmeat of Odisha, Enduri Pitha, is also called Haldi Patra Pitha. It uses fresh turmeric leaves and a mixture of black gram and rice flour paste fashioned into hand-rolled pitha. The stuffing usually has grated coconut or soft cottage cheese, jaggery, and black pepper. The turmeric leaves permeate an exotic aroma, and that's the signature identity of Enduri. This pitha was traditionally prepared by steaming in oversized earthen pots. It is one of the numerous pithas offered to the Lord Jagannath in the Sakala dhupa at the Jagannath Temple, Puri. Enduri pitha is the primary delicacy for the celebration of Prathamastami, which honours the firstborn.

This northwestern state of India is popular for its mouthwatering vegetarian delicacies. When the reference is about food cooked in leaf, Gujrat has a different game called patroda or patra. It uses arbi leaves. In most of the food prepared around leaves, the wrapper leaf is discarded. In patroda, it's the arbi leaves that one consumes. Patoleo or Patholi from Goa shares similarities with the Enduri pitha. This traditional sweet from the scenic coastal state is made with soaked and pounded rice batter. A rich stuffing with grated coconut, jaggery and cardamom powder goes along. It is then enveloped in a turmeric leaf and steamed. This delicacy's signature element is the leafy fragrance. At times these rice dumplings use raw jackfruit leaves as wrappers. Apart from Goa, a few other pockets on India's west coast make this sweetmeat.

Nangal Dhowa, which translates into washing the plough, is a native festival of Assam. This ceremony commemorates the end of the Assamese paddy farming season and is observed on the last day of the Assamese month of "Bhada."  This fading custom has the unique inclusion of a typical plant called the Tora (Alpina). The locals prepare rice cakes or pitha wrapping in Alpina and serve with duck meat or lentils. 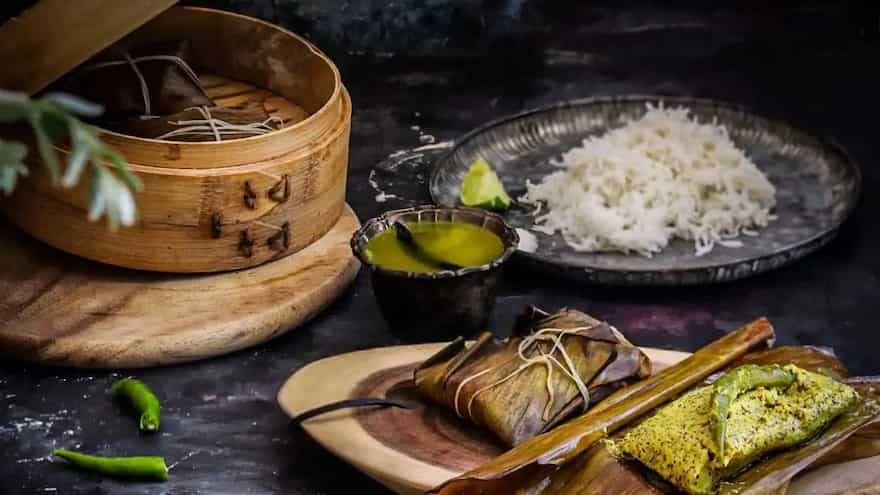 In Bengal, the term paturi refers to food cooked in a traditional method using leaves. In Bengali, pata means leaf, and from this, the word paturi originates. The ingredients in this particular cooking method are wrapped in leaves and either steamed or roasted on a griddle. The choice of leaves is crucial as they enhance the flavour of the food when steamed. Prawn or chingdi paturi, bhetki-maach er paturi, ilish paturi and chicken paturi are famous non-vegetarian options. Similarly, chhana er paturi and mocha er paturi are popular vegetarian variants. The leaves used in this dish might be anything from ash gourd leaves to banana leaves.

So which one sounds appetising to you?

Enduri Pitha: Everything You Need To Know About This Odia Delicacy Made With Fresh Turmeric Leaves