A typical British shandy is equal parts beer and lemon-lime soda. In Goan homes, the shandy is made with kingfisher beer (or any other local beer), topped up with Limca or Dukes Lemonade Come July, schools shut in the UAE as the scorching desert sun is at blazing point. Most expats plan to escape the heat, returning home to family and friends or chasing exotic destinations and cooler climes over the summer. Like everyone else, almost as soon as our school holidays began, our family would be off to India, an annual pilgrimage to meet our two sets of grandparents. These visits meant catching up with cousins, visits to aged relatives, a quick getaway to Goa perhaps, and plenty of our favorite food and drink.

There were some characteristic elements of these mini family reunions and of all the visits to relatives' houses, my favorite was our visit to meet my dad’s sister, my aunty Angela. It was here that I had my first taste of alcohol - a shandy. In Mumbai, the shandy is a local adaptation of the traditional British drink - made with local beer and lemon soda-and it is one that any Goan household is all too familiar with.

A typical British shandy is equal parts beer and lemon-lime soda. In Goan homes, the shandy is  made with kingfisher beer (or any other local beer), topped up with Limca or Dukes Lemonade. Sometimes 7up or Sprite, but that’s a compromise. It is served to female guests, usually following vehement protests of “I’ll just have a soft drink”. Like most women at the time, my mum was not accustomed to drinking hard liquor and a few sips were enough for her to feel light headed and not quite herself. So, she would politely refuse when offered a drink. To this my uncle would chide my mother, urging her to at least have a small glass of port wine or a shandy, to join in the celebrations. After much persuasion, finally relenting, my mum would settle for a shandy, make sure to add “But just a little bit of beer….very little”. 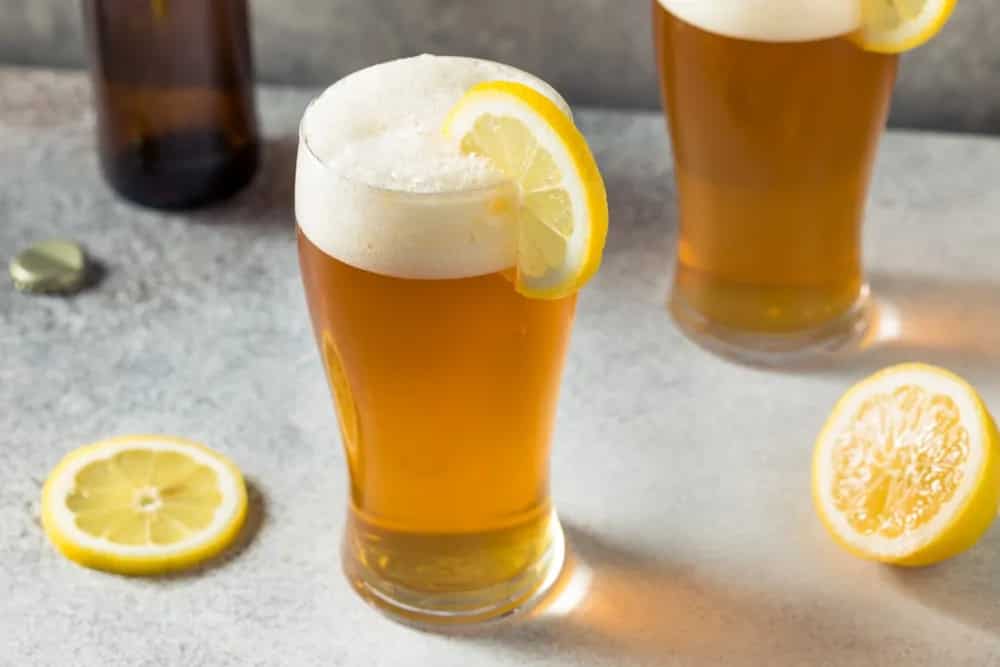 Thick-glass beer mugs would be taken out from a small dark mystery cupboard where all the “good crockery” was kept. Crockery that was to be taken out only for guests. The mugs would be ceremoniously laid out on a tray alongside whiskey glasses for the men. The same beer mugs, the same tray, visit after visit, for years. I could close my eyes and see the orange, green and brown floral pattern imprinted on the slightly discolored serving tray even now. Being offered a shandy, a drink with actual alcohol, felt so grown up. It was my first lady’s drink.

To make a shandy, chilled beer is poured into old-fashioned beer mugs, till three-fourth of the level of the glass. Sugary sweet Limca is then poured over, giving it a pleasantly sweet taste. I’d watch with rapt attention as my uncle poured out our drinks, beer mugs lined up on that special serving tray reserved for guests, the bubbles of beer-lime soda rising up, forming a crown of froth that threatened to spill over. The proportions of alcohol to lime soda are inversed when pouring out a drink for underage drinkers like I was - limca, the primary ingredient and a quick dash of beer added, giving it an appearance of liquid gold.

On hot languid summer holiday afternoons, sipping a chilled shandy was such a delight. Even the crows on the mango tree outside cawed lazily, reminding us that it was a Sunday. ‘Sip slowly,’ my mother would warn, in between rapid exchanges of family stories, neighbourhood gossip and updates on weddings and funerals. The first frothy sip was bitterish, the soda sting ever so slight, followed by the sweet elixir of beer & lemonade. All the while, my aunty Angela dashed in and out of the kitchen every couple of minutes, busily frying and serving up crispy hot chicken lollipops and kebabs, laying out chicken patties from the nearby Hearsch bakery, filling up bowls with potato wafers, chivda and other delights to be munched on with the drinks.

Despite the warning looks, I always found myself gulping the delicious sweet shandy quite quickly till my tummy felt like it would burst. I was rarely offered a second drink and if I was, it was expected that I would refuse. It was the ladylike thing to do.

Shandy: The History Of The British Drink