Lakadong turmeric is the miracle spice of Meghalaya

A spice revolution unfurls in the Jaintia Hills; the birthplace of the world’s finest variety of haldi Lakadong is hard to trace on the map. The tiny, nondescript village at the foothills of the west Jaintia Hills in Meghalaya, is the heartland of a silent revolution. This is where the world’s finest variety of turmeric grows, and is most favoured for its high curcumin content of more than 7%, as against 2 to 3% found in regular varieties available in the market.

Curcumin, the key active ingredient in turmeric, is a miracle compound known for its antioxidant and anti-inflammatory properties and renders a bright yellow colour to the spice. The higher the curcumin, the more prized is the turmeric.

Lakadong turmeric is now having a moment as the variety is endemic to the region owing to the good terroir. Its popularity has got agri-startups to retail it far and wide, and nudged homegrown artisanal brands and chefs to experiment with it.

The turmeric woman of Meghalaya

Every day when the last bell of the school rings, Trinity Saioo knows it is time to pack up and be with her farmer folks. A primary school teacher by profession, the 53-year-old is the real force behind the turmeric revolution. A crusader of the Lakadong variety, Saioo lives in the adjoining village of Mulieh, and belongs to a family of farmers. “I remember my grandparents being farmers. Even my mother would spend most of her time on the turmeric fields,” she says. When she is not teaching, Saioo can be found on the farms or at a processing unit either drying, slicing or grinding turmeric.

It all started in 2003 when the Spices Board of India announced a subsidy to farmers for growing turmeric. Saioo gathered her community, especially women farmers, and encouraged them to farm turmeric. “I helped them with filling out the forms, and other formalities to initiate the process. I am a teacher after all,” says Saioo.

Over the course of time, she won the support of 700-800 women from the surrounding villages. In 2014, the Indian Council of Agricultural Research arrived in the region to launch various projects. After trial runs, it recognised the variety growing in Lakadong to be of far superior quality due to its high curcumin content. “We were encouraged to expand our lands and continue farming as it had created a demand in the market,” she informs.

By next year, Saioo had acquired a processing unit, and started two cooperative societies with the help of Kisan Credit Card (KCC) loan. She also started guiding the community on pest management and the use of biofertilisers. In 2018, the Meghalaya government launched Mission Lakadong, a programme that envisions a production target of 50,000 metric tonnes of turmeric per year by 2023 from a current 20,000 metric tonnes approximately per year under her leadership. In 2020, Saioo was awarded the Padma Shri for her contribution in leading the movement. 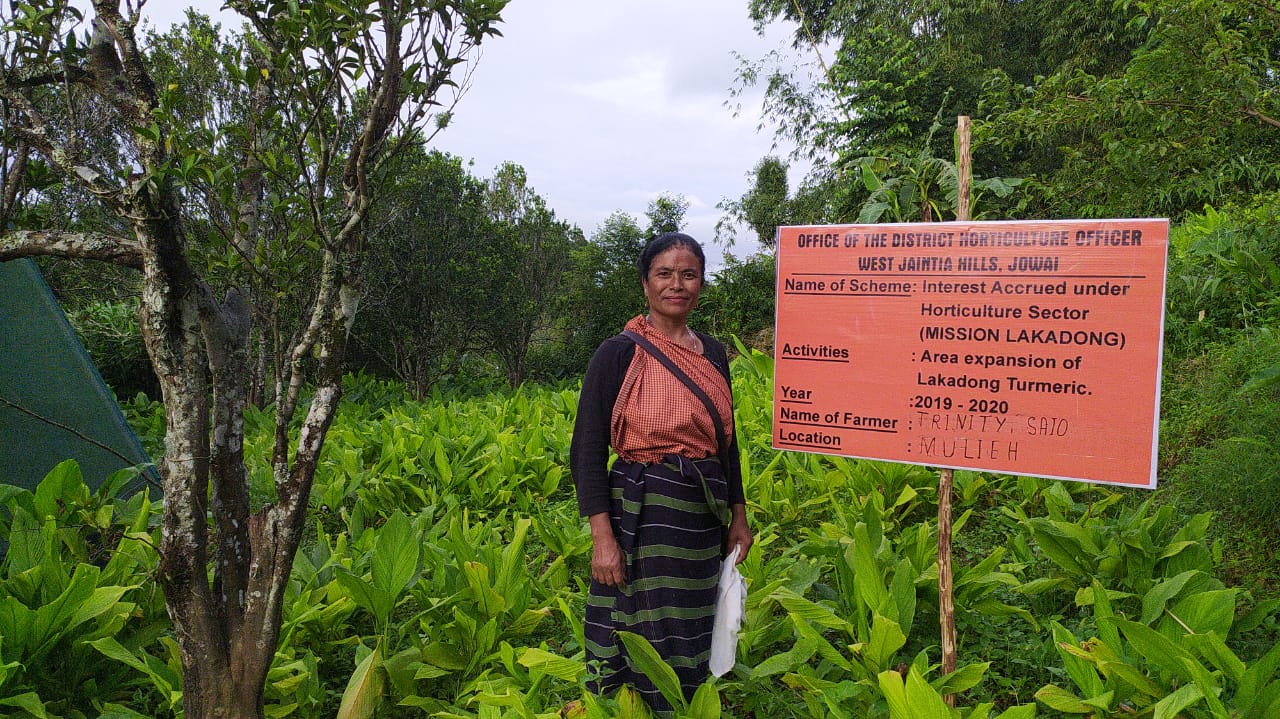 Trinity Saioo in a turmeric farm.

In a world of turmeric lattes, golden milk and our very own haldi doodh, the demand is inevitable. Independent brands like Zizira and Pahari Roots are sourcing the produce responsibly for the health conscious consumer, by engaging small holding farmers in the region who use sustainable farming methods.

Last year, sisters Bhavna Ahuja and Chaya Bahirvani along with friend Stephanie Marbaniang launched Pahari Roots to support small family farms, and rare indigenous produce of Meghalaya. “It was disturbing to know that most farmers had stopped cultivating the variety as they could not fetch the right price for it,” says Ahuja, who is originally from Shillong and manages operations from Mumbai. The brand retails two variants with varied curcumin content, and a curative blend consisting of Lakadong turmeric, ginger, black pepper and cinnamon.

There’s haldi in my cocktail

Its fresh, earthy flavour profile has also got mainstream chefs to experiment with Lakadong turmeric. At Ummrao, Courtyard by Marriott, Mumbai, it is not only used in the food, but also to prepare beverages. “Because of its high curcumin content, this variety of turmeric imparts a sharp, bright yellow colour to food, which is much desired in Indian cooking,” says chef Mukhtar Qureshi of Ummrao, who favours it for its exceptional flavour and nutritional value. He uses Lakadong turmeric in the Awadhi speciality nalli nihari, and in Bill Boothby, a golden-hued cocktail prepared along with kaffir leaf syrup and gin. 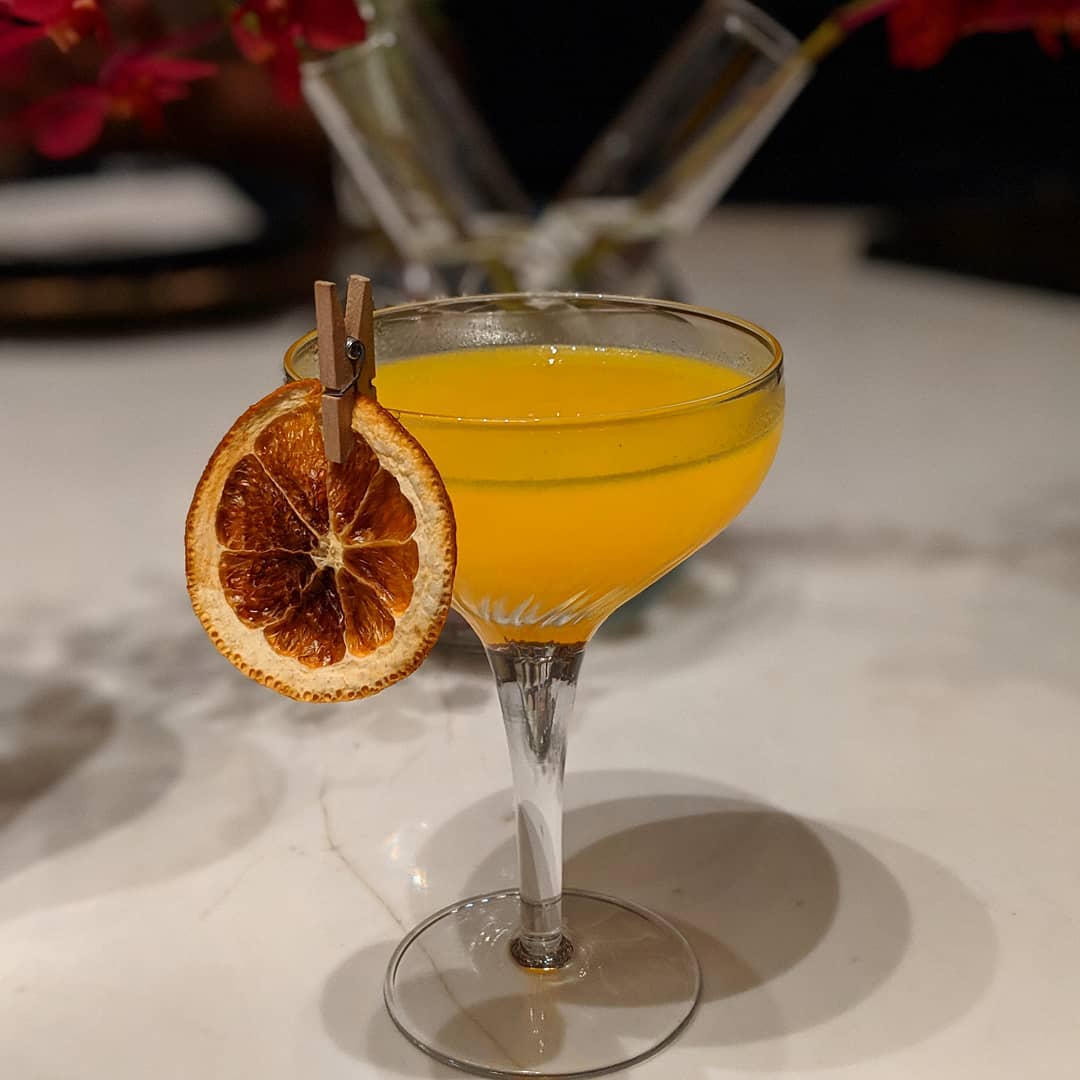 The Bill Boothby cocktail at Ummrao, Courtyard by Marriott, Mumbai.

There is no dearth of inspiration. Mumbai-based artisanal food brand Native Tongue came up with a power-packed nut butter by blending Gurbandi almonds with Lakadong turmeric. Golden Almond Butter is a unique product as “we are the only ones outside of core manufacturers and retailers who are offering a condiment using Lakadong turmeric as an ingredient,” says founder Ruchira Sonalkar. One of the many ways of activating curcumin is to mix it with good fats.

Saioo has faith in ancient medicine, and the power of a spice that she has been nurturing for close to two decades. “I have never visited a hospital as I can rely on my turmeric for any kind of illness,” she says.

Feast from the East is a series that celebrates the culinary heritage of eastern and north-eastern India. Rituparna Roy is a Mumbai-based writer.

Turmeric And Pepper- The Power Couple of Spice Kingdom