Most Hindus across the country, are either observing a fast, or consuming a vegetarian on the occasion of Shivratri today. It’s festive time across the country and the Kemmu household is no different. As most of you would know actor Kunal Kemmu is a Kashmiri Pandit, and in Kashmir Shaivism, Shivratri is called Har-ratri or simply Herath. Kemmu, along with his family members actor Soha Ali Khan and daughter Inaya Kemmu, kept small Puja at their house on Monday to ring Herath. Both the actors took to Instagram to give us a glimpse of the same. While Kunal shared a reel capturing the moments from the Puja, where they had also invited over Pandit; Soha shared a series of Instagram stories where little Inaaya seemed to steal the show with her participation in festive rituals, from pouring milk into a pot to serving lunch to her father in a traditional, sit-down set up, Inaaya had a gala time.

Coming to the festive lunch, Most Hindus across the country, are either observing a fast, or consuming a vegetarian or Satvik meal on the occasion of Shivratri today. Many devotees and Shiva followers give up on meat a day or two before Shivratri.  In the Instagram story posted by Soha on Monday, we got a peek into their hearty, Kashmiri Pandit feast, comprising soul food like Kashmiri Rajma (which is much darker in colour as compared to the legumes grown in other parts of the country), then there were two bowls of perfectly cooked Basmati rice, a runny Aloo-matar ki sabzi and some saag aloo. In the picture, both Kunal and Inaaya are seated on floor where the spread has been laid out. And little Inaaya can be seen serving a portion of Rajma onto her father’s steel plate, while Kunal looks on. “#herathmubarak” Soha captioned the image. 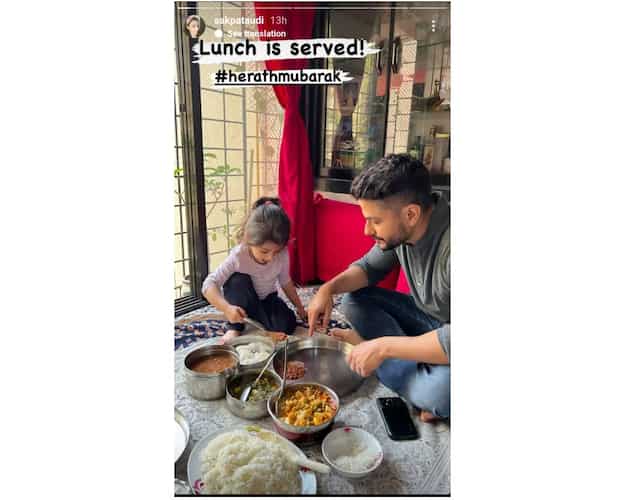 How To Make Kashmiri Rajma?

There are very subtle differences in Punjabi and Kashmiri Rajma, both of which are known to be spicy, savoury mains. The Kashmiri Rajma is very easy to make at home. Once you have soaked the rajma overnight, all you need to do is cook it in a masala made of hing, jeera, onions, tomato puree, ginger and powdered masalas. You can add yogurt if you want to make it a slightly thick, and tangy gravy. When you add tomatoes, gently mash the beans with tomatoes, so that the beans are steeped with masalas.

Here is a step-by-step recipe of Kashmiri Rajma you must try.