Kareena Kapoor Is Hooked To Her Favourite Beverage

Kareena Kapoor's love for coffee ensures that she consumes it multiple times during the day. If there’s one thing that you would already know about Kareena Kapoor, it’s that she’s a big coffee aficionado, just like her sister Karisma Kapoor. The two sisters keep posting reels and photos about how much they love this beverage. Kareena’s love for coffee ensures that she consumes it multiple times during the day. Recently, she posted a photo holding a cup of coffee in her hand as she walked. She captioned the photo, “never without my coffee. It’s a vibe.” Kareena was on sets shooting while she posted this photo with her favourite beverage to her Instagram story.

Kareena is a foodie and don’t we all know it. Recently, the actress had posted a reel that went viral on social media garnering around 30 lakh views. The reel featured Kareena eating fries along with her co-stars. In the reel, one could see Kareena eating the fries and holding a cup of chai in her other hand. Kareena had captioned the post, “When it's freezing, you know what to do…French fries oh put chaat masala and red chilli on it....ufffff.” Kareena’s co-star Vijay Varma and celebrity make up artist Pompy Hans could be seen enjoying the French fries and tea along with Kareena.

Don’t let a viral video fool you in to thinking that Kareena would ever be in #teamchai. Unlike Diana Penty, this diva is loyal to her cup of coffee. In fact one of her first reels on social media is about coffee. In the video you can see Kareena holding a cup of coffee and smiling while a song with lyrics about coffee is heard in the background. Kareena had captioned the reel, “breakfast with bebo.” The reel got 7 million views and had around one thousand nine hundred and eleven comments.

Kareena also keeps posting photos from the many dinner parties and celebrations that she keeps attending. In fact, Kareena is such a foodie that she celebrated national sisters day last year not by going out and shopping, but by rather spending a day with her sister Karisma eating the entire weekend. In the video you can see Kareena and Karisma eating dosas, chicken, chocolate cake and then finally falling in to a food coma and dozing off. Kareena’s feed also has photos of the dinners that she attends along with her girl gang. 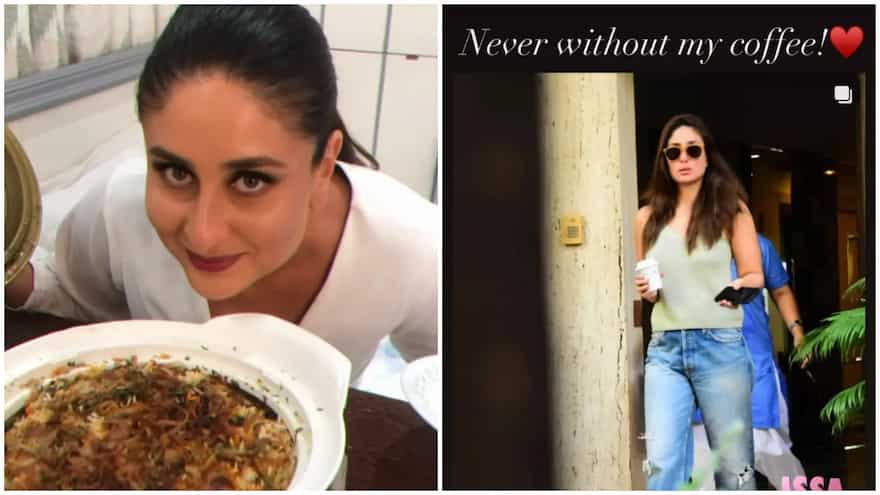 Another viral food video of Kareena was one in which she posted about killing monday blues with biryani. In the reel, Kareena was seen lifting up the lid off a bowl full of hot biryani. Kareena took a sniff at the fragrant biryani and served some on to her plate. She even shared the rest of the biryani with her co-workers and staff. An excited Kareena sway to Punjabi music as she ate every bite of the biryani. “Tomorrow I should bring moong halwa,” says Kareena towards the end of the reel. Food seems to be on Kareena’s mind always, and we love it.

Diggin To Kev's Cafe : Your Guide To Cafes Around Delhi University’s South Campus